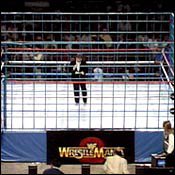 Hulk Hogan was warned by his doctors not to compete in the main event of WrestleMania 2. Several weeks prior to the event, Hogan's ribs were severely injured at the hands of the massive King Kong Bundy. However, Hogan would hear none of that, as he risked permanent injury to defend the WWE Championship against King Kong Bundy in a steel cage during the Los Angeles portion of WrestleMania 2.

Hogan not only competed in the cage, but he won as well. The Hulkster delivered his devastating leg drop, then scaled his way up and over the cage, putting an end to Bundy's dreams, as well as those of manager Bobby "The Brain" Heenan, of becoming champion at WrestleMania 2. .