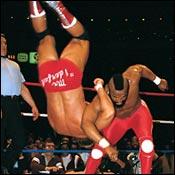 The match lived up to all its hype and then some. The action picked up immediately as Piper and Mr. T exchanged slaps across the face. From there, the four competitors gave everything they had in an all-out war. In the end, it was Hogan and Mr. T coming out victorious when Hogan covered Orndorff for the 1-2-3, after Bob Orton accidentally hit "Mr. Wonderful" with his cast.

After the match, Roddy Piper and Bob Orton blamed their partner Orndorff for the loss. Their disgust led them to attack "Mr. Wonderful." After the altercation, fans took to Paul Orndorff. He soon became a fan favorite.