Last Man Standing is one of WWE's most brutal matches, requiring that the contest continue with no disqualifications until one competitor is unable to rise to their feet before a 10-count. It's a match that leaves both competitors battered and broken, just one Superstar slightly more so than the other. Learn about the history of some of the most brutal battles as you read through our look back at some of the greatest Last Man Standing Matches in WWE history. 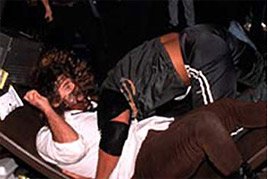 The Rock vs. Mankind - Royal Rumble 1999
At Royal Rumble 1999, The Rock defeated Mankind in an "I Quit" Match to win the WWE Championship. His title reign didn't last long, though, as Mankind defeated him in an Empty Arena Match one week later to reclaim the title. So, by the time St. Valentine's Day Massacre 1999 rolled around, the two men couldn't wait to get their hands on one another in a Last Man Standing Match.

The contest was a brutal one, finally ending when the Superstars exchanged blows with two steel chairs, hitting one another simultaneously and knocking each other out. With both men laid out unconscious, the 10-count started and ended with no one getting to their feet. The hellacious match was declared a no contest and, as a result, Mankind remained WWE Champion.

Shane McMahon vs. Big Show - Backlash 2001
At Backlash 2001, Mr. McMahon put his own son up against Big Show, going so far as to step in and hit his son with a steel chair in order to retaliate for Shane's WrestleMania X-Seven victory over the WWE Chairman. In an amazing bit of risk-taking that Shane would attempt to repeat two years later, he leapt from high above the entranceway, dropping an elbow onto The World's Largest Athlete and sending them both through the platform below.

While both men were unconscious, Test stepped in to hoist Shane to his feet. As the referee counted, he draped the Chairman's son over a camera boom, keeping him on his feet long enough to pick up the win. 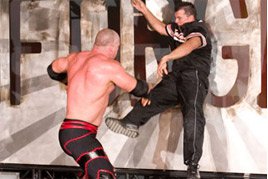 Kane vs. Shane McMahon - Unforgiven 2003
At Unforgiven 2003, the WWE Chairman's son risked everything against Kane in a Last Man Standing Match. That night, McMahon took a huge gamble, climbing the rigging of the set and leaping off to drop an elbow on his opponent from 40 feet in the air. Unfortunately for McMahon, however, Kane moved at the last second.

To the amazement of the crowd, Shane crashed through the wooden platform, brutalizing his own body. This leap of faith had proven effective in other battles, but Shane O'Mac's miscalculation cost him the match as the official counted him out, leaving the Big Red Machine standing tall - and last. 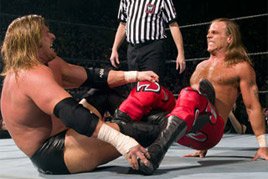 Shawn Michaels vs. Triple H - Royal Rumble 2004
The Game is no stranger to the Last Man Standing Match, especially when championship gold is at stake. At Royal Rumble 2004, Triple H defended his World Heavyweight Championship against his DX co-founder, Shawn Michaels. The Cerebral Assassin wasted no time in working over HBK, and hit the Pedigree on his former friend. Astonishingly, The Showstopper managed to get up on one knee by the count of 10, and the match continued.

Triple H rushed in to finish his exhausted and battered opponent, only to be met by a fading Michaels' Sweet Chin Music. With both men down, the referee made the count of 10 before either could raise themselves off the canvas, and the match was declared a no contest, keeping the championship in The Game's possession.

Undertaker vs. The Great Khali - SmackDown, Aug. 18, 2006
Fearing that Undertaker and The Great Khali would destroy each other before their Last Man Standing Match at SummerSlam 2006, General Manager Theodore Long rescheduled it for SmackDown - the first time such a brutal match type would air on network TV. The Deadman took the fight to the Punjabi giant, using whatever he could get his hands on, including ring steps and steel chairs.

Though he was thrown off the stage onto a row of tables, The Phenom managed to rise before the 10-count and respond to the attack with a flurry of chair blows to Khali's skull. After being planted to the mat with a vicious chokeslam, the 7-foot-3 leviathan stayed down as The Undertaker was declared the victor. 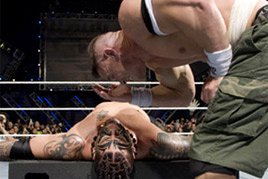 John Cena vs. Umaga - Royal Rumble 2007
John Cena had defended the WWE Championship against many fierce competitors, but at Royal Rumble 2007, he was faced with the most monstrous of challenges: facing Umaga in a Last Man Standing Match. The Samoan Bulldozer's power and speed made him one of Cena's toughest opponents to date, until Umaga missed a splash and gave Cena the opening he needed.

Resorting to tactics not usually seen from the Cenation leader, Cena used the ring itself as a weapon, detaching the top rope and using it in his STF on Umaga. With the Samoan Bulldozer unable to respond to the referee's count, Cena secured the win and retained his WWE Championship.

Undertaker vs. Batista - Backlash 2007
After The Undertaker defeated Batista at WrestleMania 23 to win the World Heavyweight Championship, The Animal challenged The Phenom to a Last Man Standing Match at Backlash 2007. Batista unloaded his entire arsenal, but even spinebusters and a Batista Bomb weren't enough to keep The Deadman from rising before the referee could complete the 10-count.

With no other options left, Batista speared The Phenom off the stage, sending both men crashing into a bank of audio equipment. They were both rendered unconscious, and as medical personnel rushed to their sides, the referee called the match a no contest, with Undertaker retaining the title.

Triple H vs. Randy Orton - No Mercy 2007
At No Mercy 2007, the vacated WWE Championship changed hands twice. At the beginning of the night, Randy Orton was awarded the title, but was quickly forced to defend and lose the title against former mentor Triple H. Orton then immediately exercised his rematch clause with Mr. McMahon's stipulation that it be in a Last Man Standing Match.

Although this was Orton's second match that evening, it was Triple H's third. The two exhausted Superstars fought viciously, but it was The Apex Predator who won out after hitting The Game with an RKO over the announcers' table. Triple H was too battle-worn to rise for the 10-count, making The Viper the new WWE Champion and commencing the "Age of Orton." 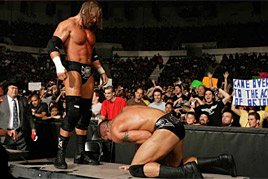 Triple H vs. Randy Orton - One Night Stand 2008
In 2008, the bitter rivalry between Triple H and Randy Orton had reached a fever pitch. The tension between the two once again reached a point where they could only settle their differences by proving who would be the Last Man Standing. Triple H won the WWE Title at Backlash, eliminating then-champion Orton last in a Fatal 4-Way Match. The following month at Judgment Day, Triple H again defeated Orton in a Steel Cage Match. Finally, The Viper had the opportunity to choose a match stipulation after winning a tag team match, and chose the very match in which he defeated Triple H a year earlier.

In one of the most brutal Last Man Standing Matches ever witnessed, The Game and Orton unleashed heavy-handed blows and utilized anything they could find around the ring. The intensity of the match left the entire WWE Universe on the edge of its collective seat, but WWE's Apex Predator ultimately could not answer the official's 10-count after being thrown over the top rope, landing awkwardly and breaking his collarbone.

The Rated-R Superstar and John Cena shared intense and legendary rivalries over both the WWE and World Heavyweight Titles. In 2009, Edge nefariously won the World Heavyweight Title in the Elimination Chamber after attacking and replacing Kofi Kingston before the match. Cena would regain the title at WrestleMania, winning a Triple Threat Match against Edge and Big Show. The next night on Raw, however, Vickie Guerrero announced that The Champ would defend the title against Edge in a Last Man Standing Match at Backlash.

As soon as the opening bell sounded, the match quickly became an all-out brawl, with each Superstar trying to win the match as fast as possible. However, neither would stay down for the official's 10-count, and with each passing minute the match became more intense. Edge could not keep Cena down with the Spear, nor could Cena stand tall, even after tossing The Rated-R Superstar into the crowd with an Attitude Adjustment. As the battle raged throughout the arena, Big Show suddenly intervened, chokeslamming Cena through a spotlight and allowing Edge to recapture the World Heavyweight Title.

John Cena vs. Batista - Extreme Rules 2010
At Elimination Chamber 2010, Mr. McMahon ordered John Cena to defend his WWE Title against Batista following a grueling battle inside Satan's Structure. Cena was helpless against Batista and during the weeks leading to WrestleMania XXVI, The Animal felt that Cena, who debuted in WWE at the same time, stole his spotlight. Through hustle, loyalty and respect, Cena ignored Batista's taunts and reclaimed the WWE Title at WrestleMania XXVI. Immediately invoking his rematch clause, The Animal demanded a Last Man Standing Match at Extreme Rules.

When the two Superstars collided again, it was certainly the most physical contest of the evening. Each warrior unleashed their most punishing maneuvers in the hopes that the other would stay down, but time after time, this was not the case. Neither Cena nor The Animal would accept defeat and could have possibly traded blows all night. Finally, Cena saw an opening, retrieved a roll of duct tape from beneath the ring and taped Batista's legs between the ring post. With The Animal unable to break through his adhesive-based shackles and stand for the official's 10-count, Cena retained his WWE Title.

Edge vs. Kane - SmackDown, Jan. 7, 2011
After defeating Rey Mysterio and Alberto Del Rio to become no. 1 contender to the World Heavyweight Title, Edge engaged in one of the most physical rivalries of his career against Kane. Their first meeting at Survivor Series 2010 was so intense that it ended in a draw, allowing The Big Red Monster to retain the title. The following month, Edge captured the title at WWE TLC after defeating Kane, Mysterio and Del Rio in a wild Fatal 4-Way Tables, Ladders and Chairs Match.

Invoking his rematch clause on the first SmackDown of 2011, Kane and The Rated-R Superstar battled in one of WWE's most intense Last Man Standing Matches. The WWE Universe witnessed the two ring warriors battle throughout the arena and use everything at their disposal to try and secure the victory. Edge would finally retain the World Heavyweight Title by targeting Kane's knee and smashing it with a con-chair-to. Unable to put weight on his leg, The Big Red Monster could not stand before the official's 10-count.

Randy Orton vs. CM Punk - Extreme Rules 2011
Before he started using a microphone as his personal pipe-bomb, CM Punk boiled the venom coursing through the veins of WWE's Apex Predator, Randy Orton. The Straight Edge Superstar, seeking payback for Orton costing him the World Heavyweight Championship at Unforgiven a few years earlier, wasted no time making the rivalry personal, going so far as involving Orton's wife.

After a memorable battle at WrestleMania XXVII, CM Punk's taunting continued until the pair met at Extreme Rules in a Last Man Standing Match. With his New Nexus chorts banned from ringside, The Straight Edge Superstar and The Viper engaged in a brutal contest that ended when an unbelievable mid-air RKO laid Punk out for the 10-count.