The importance of Fort Bragg

Since their first trip to Baghdad’s Camp Victory in 2003, WWE Superstars and Divas have performed for the valiant men and women of the U.S. military in Iraq, Afghanistan and at Fort Hood, Texas, as part of WWE’s annual Tribute to the Troops. This year, The Most Patriotic Show of the Year was held at Fort Bragg in North Carolina, a critical component to the military’s efforts in the Middle East and around the world.

Fort Bragg houses some of the most highly trained soldiers in the world and WWE Superstar Daniel Bryan found himself completely in awe of what the men and women of the North Carolina military installation do on a daily basis.

“It’s been incredible to see the amazing skill sets that all these soldiers possess,” said Bryan, who clashed with Intercontinental Champion Cody Rhodes at the ninth annual Tribute show. (WATCH) 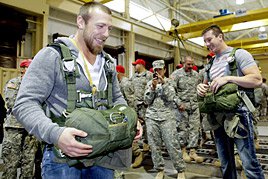 The importance of Fort Bragg cannot be understated. Covering more than 251 square miles and located in two counties, the massive Army base is home to some of America’s most elite soldiers. The compound is home to the U.S. Army Airborne Forces including the XVIII Airborne Corps and the famed 82nd Airborne Division.

“The first thing we got to see when we arrived was how the soldiers pack parachutes for their jumps,” Bryan described. “How quickly and efficiently the parachute is packed is simply unreal.”

Awestruck by the discipline and abilities of each individual soldier, it’s safe to say the SmackDown Money in the Bank winner found a new appreciation for the men and women who selflessly answer a call to protect America.

Bryan, along with other WWE Superstars also participated in a critical component of airborne training, the Fort Bragg jump tower. This structure, a staple of training airborne soldiers on various military installations, is essentially a zipline that simulates what it feels like to parachute from a military airplane, such as a C-130. (PHOTOS)

“We got to participate in the jump training,” Bryan excitedly explained. “You jump from the tower, freefall and then catch a zipline and glide across the field, you really get a glimpse of the training the airborne soldiers can go through, and it’s absolutely incredible.” (WATCH: SUPERSTARS SKYDIVE) 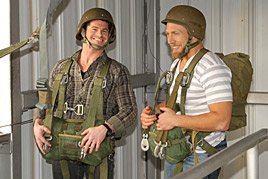 While the WWE Superstars and Divas were able to see the training that goes into becoming an airborne soldier firsthand, a side of Fort Bragg not seen plays an important role in America’s efforts around the world.

Stationed at Fort Bragg are the U.S. Army Special Forces – The Green Berets. Distinguished by their specific headgear, these brave men are specially trained in various skill sets to make them some of the fiercest warriors in the world. One of their primary missions is to aid foreign citizens to fight against oppressive regimes and governments. For example, Green Berets deployed to Afghanistan help tribal villagers stand up for themselves and battle the Taliban, the regime who do not want to allow the villages to enjoy the freedoms that some Americans take for granted.

Beyond the famous Green Berets, Fort Bragg is the home of the very secretive and elite counter-terrorism unit called the First Special Forces Operational Detatchment – Delta. This unit, commonly referred to as Delta Force, is America’s first line of defense against terrorists all over the world. Functioning under Joint Special Operations Command, Delta and its counterpart, the Navy’s Special Warfare Development Group or DEVGRU (SEAL Team Six), are the most highly trained and elite military personnel in the world.

As Daniel Bryan, as well as other WWE Superstars and Divas saw first hand, Fort Bragg is more than just a military base. The North Carolina installation serves as one of the Army’s most important pieces, training some of America’s finest soldiers.