Although Wade Barrett has without a doubt succeeded in leaving his mark in the squared circle – drawing the ire of the entire WWE Universe – the fierce competitor feels that he has lost his focus on making money, by far his No. 1 priority. The ruthless English Superstar has pledged to get back on track, vowing to claim everything he has coming to him. But, what is it that fuels his overwhelming sense of entitlement?

Barrett has made it clear that he will return to the single goal that brought him to both the United States and WWE in the first place – to capture all the money he can and, with it, the success he insists he is entitled to. To understand why he feels so deserving of such prestige, one must only look at where he came from.

Since emerging victorious in WWE NXT season one, Barrett has quite simply made his presence known. As the chief architect of both The Nexus and The Corre – two factions of unbridled dominance in its short-lived reign – the brazen brawler dramatically altered the very landscape of WWE. Under the cover of their collective turmoil, he captured the Intercontinental Championship and became a painful thorn in the side of everyone who got in his way, from John Cena to former WWE Chairman Mr. McMahon. But, with those forces no longer watching his back, how is it that his level of confidence is higher than ever? 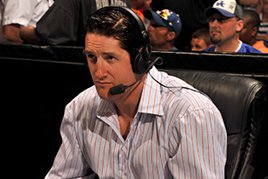 “I’m much happier on my own,” the former Intercontinental Champion insisted. “Being a member of The Corre, for example, I was obviously better than all three of those guys. However, I made the mistake of holding them as equals. No more.”

It’s true that the ruthless competitor gained a great deal of sophistication and confidence through his schooling. Nevertheless, it was Barrett’s “education in survival” that would define him, forged during his time as a bare knuckle fighter throughout the United Kingdom. Standing toe-to-toe with fierce fighters from all over Europe, he learned quickly that the only way to get a big pay day is to win big.

“My motivation in that arena was winning at any cost,” Barrett explained, “so that I could get the money that came with that success. It’s there that I learned to be extremely cutthroat.”

The winning ways and ruthless superiority of the English grappler soon commanded the attention of WWE, a place where he knew he could make even more money – and, with it, a prominence he so richly craved. 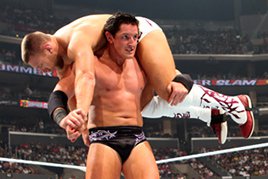 “The only thing that matters in WWE is winning and getting paid,” Barrett said in no uncertain terms. “I certainly didn’t come to entertain the crowd. I am here to get my hand raised and make it to the big events like WrestleMania, where I can make an even bigger payday. And that’s what I am going to do.”

Wade Barrett’s renewed path of single-minded destruction has made him more dangerous than ever, including a huge SummerSlam victory against Mr. Money in the Bank Daniel Bryan (photos) and a strong showing in the recent World Heavyweight Championship No. 1 Contender's Battle Royal on SmackDown (watch). And if the WWE Universe thinks he cares about what they think about the direction he has taken, he is very quick to give an answer.

“The difference between me and other Superstars is that I am more intelligent, possess a superior streetwise viciousness and am motivated by money. That’s all there is to it and I could care less what anyone thinks.”