Long vs. Laurinaitis: Who's right?

EVP of Talent Relations and Interim General Manager of Raw John Laurinaitis’ recent campaign to not only become the permanent Raw GM, but take over Theodore Long’s job as GM of SmackDown in the process, has produced differing opinions, to say the least.

On one side of the issue stands outspoken Superstars like Alberto Del Rio, Christian and Mark Henry — all of whom share Laurinaitis’ view that he should assume double-GM duties. The disgruntled former champions expressed their displeasure with Long during WWE Elimination Chamber (PHOTOS). On the other side of the issue is ... well, apparently, the majority of the WWE Universe, according to recent overwhelming Facebook polls in Teddy Long's favor. No matter who is right, though, there is no denying that a true game of one-upmanship has ensued, and a rivalry between the dueling GMs will only continue to grow. 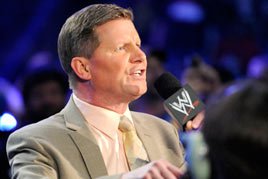 This situation boiled over Tuesday night at SuperSmackDown, when the actions of both Laurinaitis and Long led to a controversial outcome in the epic Champion vs. Champion main event between WWE Champion CM Punk and World Heavyweight Champion Daniel Bryan — a mess that resulted in two match restarts and a double pinfall finish. (SEE SUPERSMACKDOWN LIVE RESULTS).

So, which GM was right? It is true that Laurinaitis did intervene after Sheamus put his hands on his WrestleMania XXVIII opponent Bryan, in a match The Great White had no official business getting involved in. However, did "Mr. Excitement" supersede his authority by imposing his will under the SmackDown flag? It is, after all, Long's show ... at least for the moment. Furthermore, Mr. Laurinaitis did not seem as bothered after restarting the main event showdown, when Bryan used the ropes to help pin his Second City opponent — the very action that brought SmackDown's GM to the ring.

What about Teddy Long? The SmackDown General Manager has proven himself extremely capable over the years. However, has his effectiveness as a leader been affected - prehaps even compromised - by his Raw counterpart? He did suspend Mark Henry on the Feb. 3 edition of SmackDown (WATCH), a move that some speculated was the result of Laurinaitis nearly getting fired by WWE COO Triple H four days eariler. (WATCH)

So, were Teddy's actions of intervening in the SuperSmackDown main event really driven by his need to do right by his show? Or is he so threatened by the Interim Raw GM's threat to his power base that he is looking to show his capability in any way that he can?

As SuperSmackDown went off the air, a contest that began as a Champion vs. Champion Match became all about a growing power struggle in the WWE. No matter who's in the right, the events of Tuesday night's special television event on Syfy sent a clear signal that the WWE Universe has probably not seen the end of this growing conflict.

So who do you think was right on SuperSmackDown — John Laurinaitis or Teddy Long?