OMAHA, Neb. – In the wake of the Royal Rumble, Randy Orton lit-up the Barrett Barrage in a grueling No Disqualification main event, while Mark Henry got himself suspended and AJ stopped a major Big Show offensive on World Heavyweight Champion Daniel Bryan.

Randy Orton def. Wade Barrett in a No Disqualification Match (WATCH | PHOTOS)
In a knockdown, drag-out No Disqualification slug fest, bitter rivals Randy Orton and Wade Barrett turned everything in their reach – from chairs and a table to the steel ring steps – into excruciating implements of destruction. In the end, The Viper finally triumphed over his English adversary with back-to-back RKOs, executing the second one onto a steel chair. 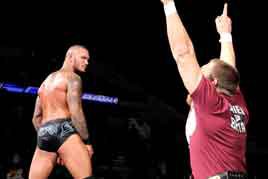 Then, upon hearing the news that he will face WWE’s Apex Predator next Friday night, World Heavyweight Champion Daniel Bryan rushed to the ring, defying the ever-present intimidation of The Viper by engaging in a victory lap of sorts – raising his arms and shouting his own praise.

Divas Champion Beth Phoenix & Natalya def Aksana & Tamina (WATCH | PHOTOS)
Prior to their Divas Tag Team Match, Natalya and Beth were warming up when the former involuntarily passed gas for the second week in a row. (WATCH)

Once the action got underway, The Glamazon opted to tag herself in, ordering Natalya "out of her ring" before delivering the Glam Slam on Aksana for the pin. Moments later, The Fabulous Firebird walked out of the squared circle without her tag team partner. Natalya regrouped, trying to initiate a post-match assault on the fallen Aksana, but Tamina came to the rescue. Dropping her adversary with a powerful kick, "The Warrior Princess" once again delivered an earth-shattering splash off the top rope. 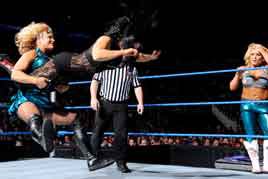 AJ stops Big Show from hitting the WMD on World Heavyweight Champion Daniel Bryan (WATCH | PHOTOS)
Singing his own praises about beating Big Show and Mark Henry at the 2012 Royal Rumble, the self-declared “role model” Daniel Bryan preached to the Omaha members of the WWE Universe about the benefits of becoming Vegan. However, when he called for The World’s Largest Athlete to be removed from the SmackDown Elimination Chamber Match on Feb. 19, Bryan quickly found himself face-to-face with the subject of his scorn. 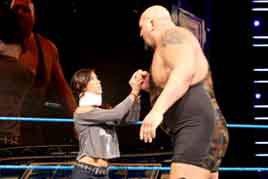 After the provoked giant hit the chokeslam on his “arrogant” foe, a neck brace wearing AJ came to the ring. In spite of the Diva's presence, Big Show looked ready to follow-up with the WMD on Bryan. However, the injured Divas grabbed his fist, causing him to hesitate long enough for her boyfriend to get to safety.

WWE Tag Team Champion Primo & Epico def. Santino Marella & “Hacksaw” Jim Duggan (WATCH | PHOTOS)
Five days after returning to compete in the Royal Rumble Match last Sunday, WWE Hall of Famer “Hacksaw” Jim Duggan teamed with Assistant to the General Manager Santino Marella to take on Primo & Epico. As Duggan chased Epico out of the ring, The Italian Stallion prepared to unleash the Cobra. But, at the last minute, Rosa blew a kiss to the “snake”-wielding Superstar, allowing Primo to hit the Backstabber for the victory over “Santin-Ho!” 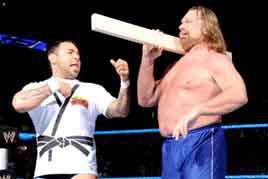 Justin Gabriel vs. Hunico ends in a No Contest (WATCH | PHOTOS)
Furious over losing to Sheamus, Cody Rhodes stuck around for the following match, attacking Justin Gabriel from behind as the high-flyer's opponent Hunico was emerging with Camacho. When the opportunistic amigos decided to join the Intercontinental Champion in his onslaught, it drew the ire of the returning Great Khali. Though Rhodes would escape the giant Superstar's wrath, the other two Superstars were not so lucky. In the end, Hunico suffered the Punjabi Plunge. 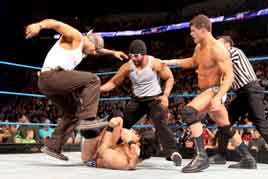 Later, Khali would be named as the final participant in the SmackDown Elimination Chamber Match. (MATCH PREVIEW) 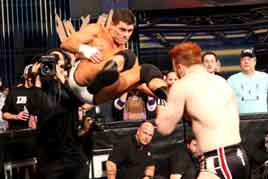 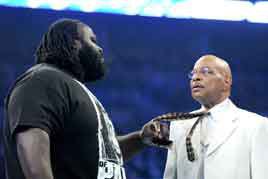 Although Mark Henry was also slated to be in the match, that all changed moments later when The World’s Strongest Man demanded that Teddy Long take him out of the Chamber and instead give him a one-on-one World Title Match that very night. As a result of the confrontation, Teddy did take Henry out of the Elimination Chamber – leaving his spot vacant – but denied the second part of his forceful request. When Henry chose to put his hands on the SmackDown leader, he quickly found himself “suspensed indefinitely."

As the enraged former World Heavyweight Champion grabbed Teddy by the tie, Sheamus emerged, stomping the massive grappler’s aggression with a Brogue Kick. After the 2012 Royal Rumble Match winner informed the SmackDown GM that he would wait to declare which World Champion he would challenge until after WWE Elimination Chamber, Intercontinental Champion Cody Rhodes decided to interrupt. This led Teddy to make a match between them.