Big Show def. Mark Henry by Count-out (WATCH | PHOTOS | WATCH AS DANIEL BRYAN STIRS UP TROUBLE PRIOR TO THE MATCH | PART 2)
Just two days before their Triple Threat Steel Cage Match against Daniel Bryan for the World Heavyweight Championship at the Royal Rumble, The World’s Largest Athlete and The World’s Strongest Man faced off one-on-one – with the champion sitting ringside. When Henry could not answer the count – the result of Big Show knocking him out of the ring – Bryan attacked the victorious giant with a chair.

After breaking out of Bryan’s LeBell Lock, Show roared back, chokeslamming the champion and nearly landing a crushing WMD. Bryan scrambled out of the ring, but where will the submission specialist run when he faces Big Show and Mark Henry in a Steel Cage Match this Sunday? (MATCH PREVIEW) 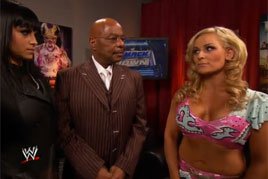 Aksana def. Natalya (WATCH | PHOTOS)
In her very first match on SmackDown, Aksana got the roll-up in less than five seconds on a distracted Natalya. After the match, the angered third-generation Diva put her in the Sharpshooter, making the Lithuanian beauty frantically tap. Tamina, daughter of WWE Hall of Famer “Superfly” Jimmy Snuka, came to Aksana’s rescue, landing a splash off the top rope onto her prey.

Prior to the match, a confrontation between Aksana and Natalya let to a very awkward moment (WATCH)

Brodus Clay def. Alex Riley (WATCH | PHOTOS)
The only living, breathing, romping, stomping “Funkasaurus” in captivity, Brodus Clay, faced off against Alex Riley. As the match began, an affable A-Ry tried to show off some moves of his own. But the Superstar from Planet Funk 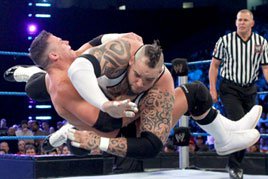 quickly squashed his rhythm, nailing his opponent with a thunderous “What the Funk!” to secure the win.

Hunico def. Ted DiBiase (WATCH | PHOTOS)
Despite a cracked bone and torn cartilage in his wrist – suffered at a WWE live event in Winnepeg, Manitoba, Canada last weekend – Ted DiBiase once again battled Hunico. With Camacho in his corner, Hunico focused his assault on DiBiase’s handicap, hurling him to the canvas to secure the victory. After the match, Hunico and Camacho attacked DiBiase and stomped his injured wrist on the unforgiving steel steps.

Randy Orton vs. Wade Barrett ended in a No Contest (WATCH | PHOTOS)
With Randy Orton set to return to SmackDown after being injured one month ago in a brutal Falls Count Anywhere Match with Wade Barrett, his English adversary declared that The Viper was “spiritually broken” and “a shell of a man.” 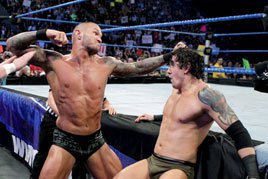 WWE’s Apex Predator interrupted and, within moments, the Barrett Barrage clashed head-on with the vengeance of The Viper, before the match could even begin. With emerging referees and Superstars unable to break them apart, Orton unleashed his retribution, creating all-out chaos. While Barrett was able to escape the ring, the present SmackDown Superstars weren’t so lucky. The Viper delivered five searing RKO’s, suggesting he’s fully recovered, physically and spiritually.

WWE Tag Team Champions Primo & Epico def. Santino Marella & Yoshi Tatsu (WATCH | PHOTOS)
Prior to the match, the odd couple tag team of Santino Marella and Yoshi Tatsu debated whether they should be called “Santoshi” or “Yoshitino.” WWE Tag Team Champions Epico and Primo didn’t appear to care either way. After Epico hit a Backstabber on a distracted Santino, the explosive champions celebrated with the stunning Rosa Mendes.

Sheamus def. Drew McIntyre (WATCH | PHOTOS)
Due to Teddy Long’s repeated threats of termination, Drew McIntyre has been on the hot seat for weeks. 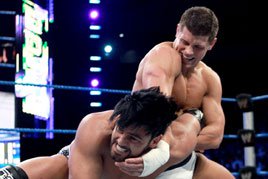 A match against the quick-tempered Sheamus did little to improve McIntyre’s shaky employment situation, as The Great White overcame the Scottish Superstar with a devastating Brogue Kick. While “The Chosen One” once again fell short, Sheamus appears to be peaking at the perfect time for the Royal Rumble Match.

Intercontinental Champion Cody Rhodes def. Justin Gabriel (WATCH | PHOTOS)
For the second week in a row, Cody Rhodes faced off against the high-flying Superstar from South Africa in an exciting, fast-paced match. Gabriel was very competitive against Rhodes but eventually succumbed to the Cross Rhodes, marking another impressive win for the driven Intercontinental Champion. Will Rhodes fulfill his declaration to triumph in the Royal Rumble Match in two days?

Big Show will face Mark Henry in a main event match (WATCH | PHOTOS)
To kick off SmackDown a remorseful and heavy-hearted Big Show apologized for his actions in unintentionally injuring AJ two weeks ago. The emotional Superstar brought doubt as to his state of mind and what the future holds for his career following his match at the Royal Rumble. 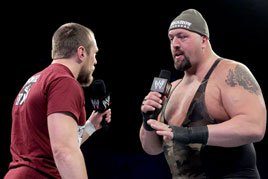 He was interrupted by World Heavyweight Champion Daniel Bryan, who insulted Show as a “genetic freak,” calling for his retirement before slapping him. The infuriated giant grabbed Bryan’s face and told him, “What happened to AJ was an accident, what I do to you Sunday won’t be.” And with that The World’s Largest Athlete tossed the champion through the air.

Not one to miss a confrontation, Mark Henry made his way to the ring to address both Superstars, reminding them that he too is part of the Triple Threat Steel Cage World Heavyweight Championship Match on Sunday. Before things exploded, SmackDown General Manager Teddy Long emerged and made an additional main event for later in the show: Big Show vs. Mark Henry.