Latest AJ injury update: How hurt is she and who's to blame?

As a result of her accidental collision with Big Show during SmackDown’s World Heavyweight Title Match this week, an injured AJ had to be carried out on a stretcher. But, who is to blame and what will be the fall-out of such a tragic mishap? The only certainty in this situation is that nothing is certain. (WATCH INJURY | PHOTOS)

Just how bad was AJ hurt after a full-on collision with The World’s Largest Athlete? 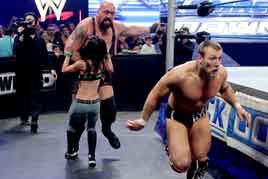 According to WWE physician Dr. Michael Sampson, "AJ is pretty beat up, as you can imagine. She has head trauma, a cervical sprain/strain and also multiple contusions all over her body."

Still, no matter when the numerous physical injuries subside, is it possible that the emotional scars could run much deeper? An impact like the one AJ experienced would be a traumatic situation for anyone. With that in mind, could the sheer memory of it keep the spunky beauty out of action indefinitely? If she does return, will she be the same positive force inside the ring that she was before she was run over by the 441 pound behemoth?

Even as the healing process for AJ is just beginning, questions are already flying as to just who was to blame for such a horrendous occurrence. Big Show – noticeably shaken from his involvement with the injury – clearly feels responsible. There is no telling the effects this will have on the gentle side of this fierce giant. However, Daniel Bryan might also share some of the blame, since he brought the action into AJ’s path by running in her direction in the first place. 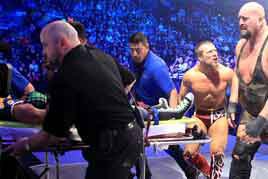 In that same vein, could AJ herself be somewhat responsible for her fate? Despite being an unfortunate victim, she did choose to be at ringside during a brutal No Disqualification, No Count-out Match – a contest that, by definition, guarantees that the danger will move outside the ring. Is SmackDown GM Theodore Long at fault for allowing AJ to be at ringside? She isn’t Daniel Bryan’s manager. She’s his girlfriend. Significant others, nor any others, are allowed at ringside without WWE’s approval.

There is also the question of what effect this will have on Daniel Bryan. Could it humble him enough to shake off the sizeable ego he has displayed since winning the World Heavyweight Title? Or will he simply adapt a new fury, channeling his resentment against Big Show?

If the tense moments after the AJ incident were any indication, Bryan will certainly place the blame squarely on Big Show’s gigantic shoulders. He has already established – in recent weeks – that he is not afraid to face the massive Superstar in the ring, or even to insult him to his face. If he makes the giant the focus of his scorn, there is no telling how far he will go to gain retribution.

What do you, the WWE Universe, think?