SmackDown results: Calamity after the storm

MINNEAPOLIS – In the wake of the explosive Money in the Bank pay-per-view, anarchy reigned on SmackDown, as the brutality of Randy Orton and Kane’s ruthless Street Fight was eclipsed only by the World’s Strongest fury.

Randy Orton def. Kane in a Street Fight (WATCH | PHOTOS)
In an intense match of swinging kendo sticks, collapsing announce tables, weaponized steel steps and a merciless ring post, former World Heavyweight Champion Randy Orton ultimately reigned supreme over Kane. When The Devil’s Favorite Demon attempted to finish WWE’s Apex Predator off with a tombstone onto a steel chair, Orton escaped – driving his monstrous prey into the waiting steel implement with an RKO for the victory.

Following the match, the two tough-as-nails warriors shook hands in a grand moment of mutual respect. However, once The Viper left, the infuriated Mark Henry entered the arena. Taking down The Big Red Monster with the World’s Strongest Slam, the enraged Superstar chose to take his attack to the next level. Trapping Kane’s already injured leg in the steel chair, The World’s Strongest Man crashed down upon it from the ropes – just as he did to Big Show at Money in the Bank five days before.

Sheamus vs. Wade Barrett ended in a Double Count-out  (WATCH | PHOTOS)
When a wild brawl between Sheamus and Wade Barrett overtook their match, the referee was forced to count-out both competitors. Afterward, Barrett hurled his distracted opponent into the ring post. But, when he tried to follow-up his assault up with Wasteland, The Celtic Warrior broke loose, flooring him with a devastating Brogue Kick.

Daniel Bryan def. Heath Slater (WATCH | PHOTOS)
Heath Slater may have walked into Minneapolis confident enough to call Mr. Money in the Bank Daniel Bryan a “loser” before their match. But, it was The One Man Southern Rock Band who was destined to walk out defeated, tapping out to Daniel Bryan’s unique display of submission excellence. 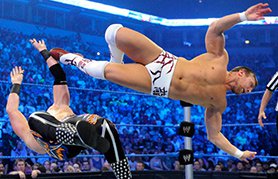 Daniel Bryan made a startling WrestleMania proclamation (WATCH)
Dismissing Michael Cole’s criticism, Daniel Bryan continued to show the same heroic determination that earned him the SmackDown Money in the Bank Ladder Match victory five days earlier. Rather than choosing to keep the moment he will cash in his title opportunity under wraps, the determined Bryan revealed that he will do it in the main event at WrestleMania on April 1, 2012 in Miami.

World Heavyweight Champion Christian def. Intercontinental Champion Ezekiel Jackson in a Non-Title Match (WATCH | PHOTOS)
Just five days after winning his second World Heavyweight Championship from Randy Orton in a barrage of controversy, Christian triumphed over Ezekiel Jackson, slamming The Personification of Domination into the ring post before executing the Killswitch for the three-count.

Randy Orton had “unfinished business” with World Heavyweight Champion Christian (PHOTOS)
After losing his World Heavyweight Title to Christian by disqualification at Money in the Bank, the irate Viper called-out the new champion and demanded his rematch. Order quickly began to break down, prompting SmackDown General Manager Theodore Long to step in. Teddy reminded Orton that he was already signed to face Kane in a Street Fight and, therefore, could not challenge his adversary. Instead, the GM decided to put Christian into a match with Intercontinental Champion Ezekiel Jackson.

SmackDown results, May 13, 2022: RK-Bro lands first strike on The Bloodline before next week’s battle