UNCASVILLE, Connecticut – With their Money in the Bank match looming, Christian did his best to get under the skin of World Heavyweight Champion Randy Orton all night long. By the end of the main event, The Viper finally snapped.

Kane def. World Heavyweight Champion Randy Orton by Disqualification in a Non-Title Match (WATCH | PHOTOS)
A night of Christian’s taunting of Randy Orton culminated during the main event between Kane and Orton. When Christian came to ringside, Kane used the distraction to clothesline Orton out of the ring. The momentum also sent Kane careening onto the arena floor. But while Kane smartly climbed back into the ring, Orton decided to pursue Christian, which resulted in him getting doused with water by Christian and counted out of the bout.

That’s when the chaos began.

As a furious Orton chased Christian around and into the ring, The Viper found himself the victim of a vicious 2-on-1 assault at the hands of both Kane and Christian. But when Kane turned his attention to Christian, The Viper blasted Kane with an RKO. Then just seconds after, Christian charged and speared Orton. After pummeling Orton with blows, Christian armed himself with a steel chair. But before Christian could use the chair, Orton kicked Christian in the gut and wrested control of the chair. Then, seething with anger, Orton erupted and unloaded on Kane with multiple, brutal chair shots while Christian looked on.

After the display, can Orton possibly contain his temper and avoid being disqualified and losing his title at Money in the Bank? What surprises does Christian have left in store for Orton? The fate of the World Title will be determined this Sunday. (Preview) 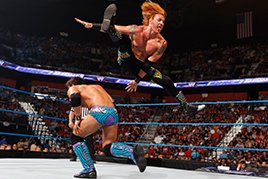 Justin Gabriel def. Heath Slater (WATCH | PHOTOS)
Together, Justin Gabriel and Health Slater were three-time WWE Tag Team Champions. And they worked together from the beginning of The Nexus to the end of The Corre. But that’s all in the past, and Slater made that clear with his words before the match against his former ally. But in the end it was Gabriel who reigned supreme in a competitive bout, defeating Slater with an impressive 450 Splash.

Divas Champion Kelly Kelly def. Rosa Mendes (WATCH | PHOTOS)
After driving Rosa Mendes' head to the canvas, Kelly Kelly picked up the win. At Money in the Bank, Kelly Kelly puts her title on the line against Brie Bella. (Preview) 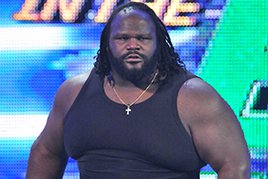 With Big Show and Mark Henry prepared to face off, there was potential for chaos … and SmackDown General Manager Theodore Long knew it. If there was any physicality between the two, Long would cancel their Money in the Bank match. As both behemoths traded emotional words, Big Show claimed his actions against Henry as of late have actually done him a favor by lighting a fire within him. Henry’s take was that being stronger and meaner is better than being big. Who will prevail when the two finally collide in the ring at Money in the Bank? (Preview)

Sin Cara def. Sheamus (WATCH | PHOTOS)
In their first match ever, Sin Cara stunned Sheamus by countering the Celtic Cross and rolling him up for a pinfall victory. With Sheamus frustrated by the loss, Wade Barrett leapt up from the announce table to gain a measure of retribution for Sheamus smashing him with a steel chair last week. After dropping Sheamus with a Brogue Kick, Barrett finished him off with Wasteland.

Cody Rhodes def. Daniel Bryan (WATCH | PHOTOS)
With no love lost between the two, Cody Rhodes and Daniel Bryan slugged it out in an evenly matched bout. While battling in the corner, Rhodes tossed Bryan to the side, causing him to land precariously with the top rope between his legs. Rhodes capitalized on the vulnerable position and dropped Bryan from the ropes with a well-targeted kick to the head, leading to a pinfall victory. 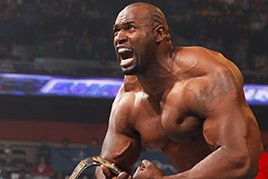 Intercontinental Champion Ezekiel Jackson def. Ted DiBiase (WATCH | PHOTOS)
With Cody Rhodes preparing for his match with Bryan, Ted DiBiase was on his own against big Ezekiel Jackson. Despite an impressive effort from DiBiase, he was forced to submit to Jackson’s punishing backbreaker. After the match, Rhodes warned DiBiase about the paper bag implications of losing another match in the future (WATCH).


Christian taunted World Heavyweight Champion Randy Orton (PHOTOS)
What started with Christian taunting Randy Orton with a picture of him with the World Title (WATCH) escalated as the night progressed. First, he vowed to find out who vandalized Randy Orton’s tour bus (WATCH). Then, he lost a bunch of Orton’s money at the roulette wheel (WATCH). Finally, he offered his thoughts on Orton in That’s What I Am (WATCH).