HERSHEY, Pa. – Christian's quest to regain the World Heavyweight Championship is still alive, thanks to a little help from The World’s Strongest Man Mark Henry.

Fighting tooth-and-nail, Christian and Mark Henry took on The Big Red Monster and World Heavyweight Champion Randy Orton. Sacrificing himself, Christian took an RKO from Orton. But before The Viper could capitalize, he instantly found himself in Henry’s waiting clutches and the victim of The World’s Strongest Slam.

Kane def. Christian by Disqualification (WATCH | PHOTOS)
After a controversial loss to Randy Orton at Capitol Punishment (PHOTOS), Christian was given the chance to earn a World Title Opportunity by Teddy Long if he could beat Kane. But during the battle, Mark Henry came calling, brutally attacking Kane, resulting in an immediate disqualification. 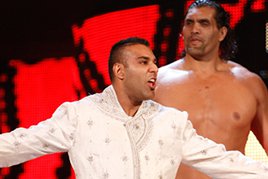 Jinder Mahal vs. Yoshi Tatsu ended in a No Contest (WATCH | PHOTOS)
Jinder Mahal continued to display his dominance by viciously attacking Yoshi Tatsu before the bell even sounded. After dispatching of Tatsu with a full nelson, suplex slam, The Great Khali tossed him from the ring. Following the destruction, Mahal informed the WWE Universe that they should continue to expect more of the same from him. And, they should expect no more dancing or kissing from Khali, as his only mission will be to serve.

Heath Slater & Justin Gabriel def. Jimmy Uso & Jey Uso (WATCH | PHOTOS)
Jimmy Uso looked well on his way to leading his team to victory when he dropped Heath Slater to the canvas with a devastating kick to the head. With Slater laid out, Uso took to the air from the top rope. But just before impact, Slater raised his knees in a well-timed counter maneuver. He quickly capitalized, rolling Uso up in a small package for the win. 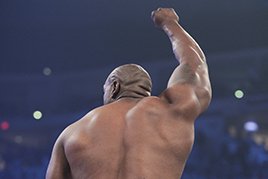 Still seething after losing the Intercontinental Championship to Ezekiel Jackson at Capitol Punishment (PHOTOS), Wade Barrett invoked his rematch clause. And before their title match evan began, Barrett attacked Jackson from behind on the entrance ramp. Although Barrett got off to a good start, his night ended the same way it did at Capitol Punishment – submitting to Jackson's painful backbreaker.

Mark Henry attacked Big Show (WATCH)
After driving Big Show through a table in an incredible feat of strength at Capitol Punishment (WATCH), The World’s Strongest Man came calling on SmackDown to attack The World’s Largest Athlete during an interview with Matt Striker (WATCH). Afterward, Big Show was taken to a medical facility for evaluation.

Cody Rhodes def. Daniel Bryan (WATCH | PHOTOS)
Before the match began, Cody Rhodes insulted the WWE Universe and his opponent (WATCH). During the bout, Daniel Bryan held is own, until Rhodes blasted him with a knee to the head, catching him in the ropes. After the ref helped Bryan untangle himself and get to his feet, Bryan was met with a boot to the face from Rhodes. The back-to-back blows were too much for Bryan to handle, who was put away with the Cross Rhodes. 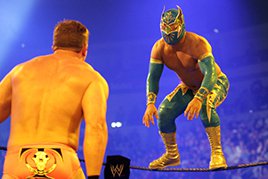 Sin Cara def. Ted DiBiase (WATCH | PHOTOS)
With his big match looming against Evan Bourne on Raw (full coverage), Sin Cara took on Ted DiBiase. In a display of amazing athleticism, Sin Cara rapidly spun his entire body around DiBiase, driving him to the canvas for an impressive win.