PROVIDENCE, Rhode Island – Just two nights before WWE’s newest pay-per-view Capitol Punishment unleashes its fury on the WWE Universe, Sheamus fell to Christian in a brutal bid to grab his place at the golden table. And the fierce tempers of World Heavyweight Champion Randy Orton and Big Show threatened to rock SmackDown to its very foundations.

Christian def. Sheamus (WATCH | PHOTOS)
Just when The Celtic Warrior looked ready to execute a superplex to Christian off the top rope, his crafty opponent dropped back and caused Sheamus’ head to smack against the steel ring post. Seizing the opportunity, the No. 1 contender to the World Heavyweight Championship jumped into the ring and quickly pinned his Irish adversary. As a result, Sheamus was denied an opportunity to join the World Title match this Sunday at Capitol Punishment.

When Randy Orton jumped into the ring moments after the bell, Captain Charisma fled up the ramp. Nevertheless, The Viper sent him a powerful message by punting the war-torn Sheamus in the head. Will a concussion keep WWE’s Apex Predator from overcoming the resourceful Christian this Sunday? (Preview) 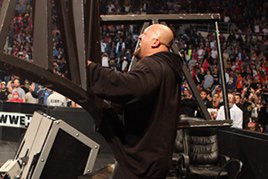 Big Show went berserk (WATCH | PHOTOS)
After Alberto Del Rio claimed he would spit in the face of Big Show if he were standing in front of him, the furious World’s Largest Athlete nearly broke SmackDown General Manager Theodore Long’s earlier order not to lay a finger on his aristocratic adversary. When the giant charged to the ring, focused on attacking his Capitol Punishment opponent, Del Rio quickly retreated into the crowd and up the stairs, leaving the irate giant to rip apart the ringside area.

The Usos def. Justin Gabriel & Heath Slater (WATCH | PHOTOS)
In an extremely physical match-up, The Usos scored a huge victory over former WWE Tag Team Champions Heath Slater & Justin Gabriel, likely propelling themselves high into contention for a tag title opportunity. As Jimmy disposed of Slater with a jaw-dropping kick, Jey delivered an earth-shattering splash on Gabriel from the top rope to secure the victory. 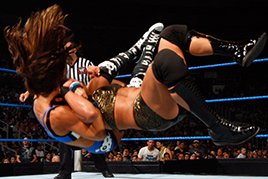 Big Show vs. Mark Henry ended in a No Contest (WATCH | PHOTOS)
With criminal and civil charges being considered against Big Show for his actions against Ricardo Rodriguez on Monday Night Raw four days earlier, SmackDown GM Theodore Long made it clear that The World’s Largest Athlete would not lay a finger on Alberto Del Rio if he showed up on SmackDown as rumored. If he did, both Big Show and Long could be fired. So, to keep the gigantic Superstar busy, Teddy put him in a match against Mark Henry.

Before the match could begin, however, Big Show’s rage took over. Without warning, he executed a vicious assault on The World’s Strongest Man. As the smoke cleared, the WWE Universe watched in awe as Henry had to be carried out on a stretcher.

Ezekiel Jackson, Sin Cara & Daniel Bryan def. Intercontinental Champion Wade Barrett, Ted DiBiase & Cody Rhodes (WATCH | PHOTOS)
Following an explosive dropkick to Ted DiBiase in the corner, Daniel Bryan attempted the pin on his fallen foe. Although it was later determined that DiBiase’s shoulder did, in fact, raise off the canvas before the three-count, the referee failed to notice it. As a result, he awarded the victory to the team of Bryan, Jackson & Sin Cara.

Sheamus earned the opportunity to compete for the World Title (WATCH | PHOTOS)
Despite the fact that Randy Orton was diagnosed with a concussion, he made it clear he wanted immediate physical retribution against Christian. However, because GM Theodore Long had not received Orton’s official medical clearance, he refused to allow The Viper to compete on SmackDown.

Interrupting Christian’s subsequent taunting of the World Heavyweight Champion, Sheamus made it clear that his non-title victory over Orton one week ago should have earned him a World Title match. As a result, Teddy Long decided that Christian and Sheamus would face off in the main event, giving Orton a ringside seat. If The Celtic Warrior won, he would be added to the World Title Match at Capitol Punishment this Sunday.