SmackDown results: From dreamer to something meaner

SPOKANE, Washington – Five days after Randy Orton crushed Christian’s dream of regaining the World Heavyweight Championship at WWE Over the Limit, Sheamus battled to the front of the pack, capturing an opportunity at WWE’s Apex Predator’s World Title.

Sheamus became the No. 1 contender to the World Heavyweight Title (WATCH | PHOTOS)
Christian, Mark Henry and Sheamus clashed in a Triple Threat Match for the right to face Randy Orton for the World Heavyweight Championship. But, when Henry opted to shove the observing Orton at ringside, The Viper jumped into the squared circle and delivered a devastating RKO to The World’s Strongest Man. In doing so, he inadvertently distracted the referee, preventing Christian from getting the three-count on Sheamus. Before Captain Charisma could regroup, the reinvigorated Celtic Warrior leveled him with a big boot, covering him for the huge victory. 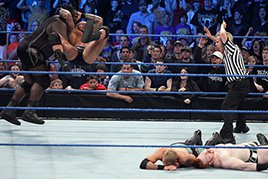 As a result of the whirlwind battle, Orton will put his title on the line against two-time former WWE Champion Sheamus next week on SmackDown.

Booker T poked fun at Michael Cole (WATCH | PHOTOS)
Four days after Michael Cole made a grand apology on Monday Night Raw for his despicable actions in recent months, Booker T called him into the ring. The former World Champion took great pleasure ridiculing the uncharacteristically humble announcer, displaying a picture of Cole kissing Jerry Lawler’s barbecue-sauce-covered feet at WWE Over the Limit and leading the WWE Universe in a “kiss my feet” chant.

Kane def. The Great Khali (WATCH | PHOTOS)
Already in a “nasty” mood over losing the WWE Tag Team Titles, and the injuries sustained by his tag team partner Big Show four days earlier on Monday Night Raw, The Big Red Monster overcame The Great Khali in an all-out “Monster's Brawl,” unleashing a vicious attack on his gigantic foe from the top rope. 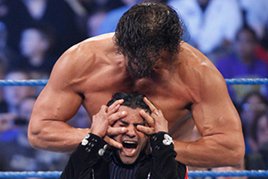 Afterward, Jinder Mahal emerged, admonishing the defeated Khali in Punjabi before once again slapping him. When Mahal and Ranjin Singh got in each others’ faces, Khali stepped in. Then, without warning, Khali put the Vise Grip on his own brother. After leaving Singh completely incapacitated, Khali shocked the WWE Universe by leaving the ring with Mahal.

Ezekiel Jackson def. Heath Slater by Disqualification (WATCH | PHOTOS)
After Jackson put Heath Slater in the painful backbreaker, Wade Barrett and Justin Gabriel stormed down to ringside to save him, drawing the disqualification. But, “The Personification of Domination” held his ground in powerful fashion, taking out all three of his former Corre cohorts.

Daniel Bryan def. Cody Rhodes (WATCH | PHOTOS)
Countering the Cross Rhodes at the last second, Daniel Bryan forced Cody Rhodes to tap-out to the Lebell Lock. Moments after the bell, Bryan was blind-sided by his bitter foe. After punishing his war-torn target with a massive assault that culminated in the Cross Rhodes, Rhodes added insult to injury by putting a paper bag on the fallen Superstar’s head.

Sin Cara def. Chavo Guerrero  (WATCH | PHOTOS)
Following his loss to Sin Cara at WWE Over the Limit five days ago, Chavo Guerrero demanded a rematch. Despite another strong effort by the self-proclaimed “Mexican Warrior,” his masked adversary once again triumphed, using his extreme athleticism to drive Chavo’s head to the canvas with incredible force.

SmackDown GM Theodore Long made a Triple Threat No. 1 Contender’s Match (PHOTOS)
After their epic championship showdown at WWE Over the Limit, Christian congratulated Randy Orton on his victory and asked him for another rematch. When Sheamus and Mark Henry took issue, Teddy Long came forth to lay down the law. Listening to the WWE Universe – who insisted in one voice that Christian still deserved a title opportunity – the SmackDown GM declared that the three challengers would battle it out in a Triple Threat main event to see who would face The Viper.