The battle brewing between SmackDown General Manager Theodore Long and his interim Raw counterpart, John Laurinaitis, over who should rule over both WWE brands is hardly the first power struggle in WWE's history. Those previous conflicts have had colossal effects across the entire WWE landscape. And if the past is any example of what will happen when the dust has settled between Long and the Executive Vice President of Talent Relations, the course of WWE history could be altered monumentally.

As the General Managers of Raw and SmackDown duke it out for ultimate supremacy, look back at the effects these prior battles have had on WWE. (PHOTOS)

Ric Flair vs. Mr. McMahon
After leading WWE in vanquishing the WCW/ECW Alliance at Survivor Series 2001 in a Winner-Take-All Match, Mr. McMahon thought he could go back to business as usual. The Nov. 19 edition of Raw from Charlotte, N.C., was filled with change. Nearly all remnants of the WWE Chairman’s former competition were removed. The extremely loud Paul Heyman was replaced at the announce table by future WWE Hall of Famer Jerry “The King” Lawler. Staunch Alliance supporter William Regal was forced to join an infamous club in order to save his career. To top it all off, Mr. McMahon was going to strip “Stone Cold” Steve Austin of the WWE Championship as retribution for his defection to the enemy. 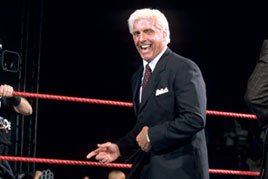 McMahon planned on handing the title to Kurt Angle, who believed himself to be a hero after covertly aiding WWE in eradicating The Alliance. Suddenly, the familiar strains of Ric Flair’s entrance music echoed throughout the arena, and “The Nature Boy” made his way into a WWE ring for the first time in eight years. The WWE Chairman and Angle looked amused, thinking the future WWE Hall of Famer had come out to get a round of applause from the crowd in “Flair Country” and be on his merry way.

Flair, however, had other plans. He revealed that when Mr. McMahon’s children, Shane and Stephanie, sold their WWE shares in order to buy WCW and ECW, rsepectively, a consortium bought them. “WOOOOO! The consortium was me!” Flair exclaimed, making Mr. McMahon grow uneasier by the second.

A beaming Nature Boy, grinning from ear to ear, did his trademark strut across the ring before declaring himself and the WWE Chairman co-limousine-riding, jet-flying, kiss-stealing, wheeling, dealing sons-of-guns. “We’re partners!” he screamed as he gave a big hug to a stunned McMahon. 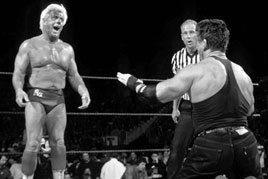 to no one's surprise, the co-owners clashed on all matters pertaining to WWE - so much, in fact, that the WWE Chairman literally put up a fight to keep The Nature Boy out of his family’s business. Flair and Mr. McMahon met in a brutal Street Fight at the 2002 Royal Rumble, though in retrospect, perhaps he should have thought twice before battling "The Dirtiest Player in the Game," who ultimately emerged victorious.

Still, the rift between the WWE’s two owners was massive. Unable to continue business in a normal manner, the company’s Board of Directors made an unprecedented decision that still affects the company to this day. WWE’s two shows, Raw and SmackDown, would be treated as separate entities, with exclusive rosters of Superstars and Divas. Flair was placed in charge of Raw, while Mr. McMahon took control of SmackDown. The inaugural WWE Draft took place on March 25, 2002, with both owners hand-picking Superstars to compete on their brand.

Ultimately, McMahon regained full control of his company in July 2002, defeating Flair on Raw in a match with sole ownership of WWE at stake. The battle for power, however, did not end there. 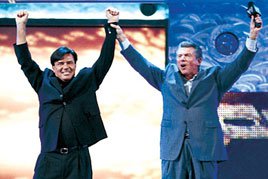 One week after taking back the WWE reins, the Chairman decided that he preferred to oversee the entire company, and thereby appointed General Managers to run the WWE’s two brands. Mr. McMahon shocked the world when he introduced the man who tried to put him out of business, Eric Bischoff, as Raw’s GM. The following Friday, he selected his daughter, Stephanie, to head up the operations of SmackDown.

It didn’t take long for Bischoff and the younger McMahon to butt heads. The two GMs tried to poach Superstars from each other’s rosters within days of their starts in office. At Vengeance 2002, Bischoff tried to lure Triple H from SmackDown, while his ex-wife argued for him to remain on the blue brand. (WATCH) Eventually, the lure of waging war against Shawn Michaels persuaded The Game toward Monday nights. Stephanie McMahon, however, would pull off one of the most shocking signings in WWE history.

At the time, the Undisputed WWE Champion was the only Superstar able to move back and forth between brands. That all changed in late August 2002, when Stephanie convinced then-champion Brock Lesnar to put pen to paper on an exclusive SmackDown contract, essentially holding the WWE Championship hostage. 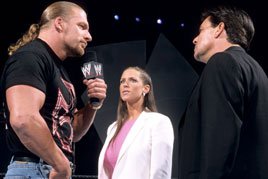 Though initially enraged that he had been outsmarted by Stephanie, the cunning Bischoff crafted a plan that would put him back on equal footing with his rival. On Sept. 2, 2002, the Raw GM rewarded Triple H for his defection to Monday nights. He presented The Game with a lavish gold title and christened him as World Heavyweight Champion, ensuring that Raw would never be without a champion. His power play also guaranteed that Stephanie’s champion could no longer be considered the undisputed title-holder in WWE, leaving millions to argue over which champion - and ultimately, what brand - was supreme.

“Stone Cold” Steve Austin vs. Eric Bischoff
Bischoff’s style of management didn’t put him in the good graces of many. His abrasive attitude prompted many to call for his head. Rather than axe him, however, the WWE Board of Directors established a system of checks and balances for Raw’s GM. 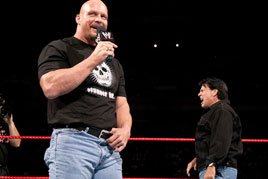 No one could have expected what that system was as Bischoff was given a partner with whom to split the duties of General Manager. That is, until April 28, 2003, when the WWE Universe erupted over the sound of glass shattering reverberated, signaling the arrival of “Stone Cold” Steve Austin. The Texas Rattlesnake began his term as co-GM by re-introducing himself to Bischoff like only he caould, with a thunderous Stone Cold Stunner.

Austin established early on that he preferred to make decisions on his own. On his first official night in office the following week, he brought the Intercontinental Championship out of retirement and immediately rehired Jim Ross as the lead announcer for the longest running episodic show in television history. Bischoff was unhappy that he was left out of the decision making process and let Austin know that he had started his term off on the wrong foot. “Stone Cold” didn’t seem to care too much and went on to throw a huge beer bash later in the night. (WATCH) 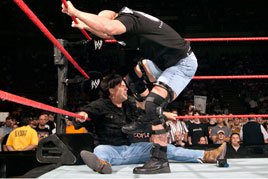 Bischoff and Austin clashed on many issues during their shared term as co-General Managers. They attempted to settle their differences on several occasions, including a Redneck Triathlon at Bad Blood 2003. The event, devised by The Texas Rattlesnake, consisted of a burping contest, a pie-eating contest and a Pig-Pen Match. Austin came out on top that night, but still remained at odds with his co-GM.

By November, the rivalry had reached its boiling point. The two agreed that at Survivor Series, they would each pick a team of five Superstars to face off, with the winning GM’s team assuming sole control over Raw. Team Bischoff looked to have things wrapped up, as Christian, Chris Jericho and Randy Orton remained, while Shawn Michaels was the last man left on Austin’s team. HBK bounced back in a big way, narrowing the field down to just Orton and himself. Unfortunately, though, The Viper had backup in the form of Batista, who laid out Michaels and gave the victory and control over Raw to Eric Bischoff, getting The Rattlesnake out of Bischoff’s hair for good.

Theodore Long vs. Vickie Guerrero
John Laurinaitis’ power play isn’t the first one that Teddy Long has had to muscle through during his years as SmackDown GM. In 2007, Long hired Vickie Guerrero as his assistant to lighten his workload. He suffered a heart attack later in the year, giving her sole power over Friday nights.

Guerrero quickly let the power go to her head. She used her new job to make life easier for herself, nephew Chavo Guerrero and The Rated-R Superstar, Edge. Her biased decision-making kept The Ultimate Opportunist constantly in the hunt for the World Heavyweight and WWE Championships, and ended with him winning gold on multiple occasions.

Long was forced to become Guerrero’s assistant after he had fully recovered. Though he tried to force and coerce Vickie into calling things down the middle, her love for Edge made fairness a pipe dream. Unable to help maintain balance on SmackDown, Long left to take the reins of ECW, where he flourished as General Manager. 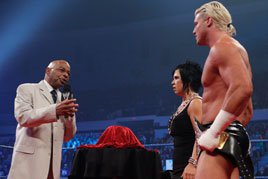 WWE’s first African-American General Manager eventually returned to the helm of SmackDown in 2009, while Guerrero found a new role as the manager of Dolph Ziggler. Their paths would cross again in the winter of 2010. Long was found unconscious backstage under mysterious circumstances, and Vickie was named Acting General Manager in his stead.

Guerrero, of course, used her newly regained power to grant Ziggler every opportunity at the World Heavyweight Championship, held by her ex-husband, Edge. Ziggler could not defeat The Rated-R Superstar, leading his desperate manager to simply strip Edge of the title and give it to him.

Thankfully, Theodore Long returned to take back his office and restore justice on SmackDown in January 2011. He forced Vickie into revealing that she had Ziggler attack him, putting him out of office. Long then forced Ziggler to defend his title on the spot against Edge. The Rated-R Superstar regained his gold, while Ziggler was fired immediately. Long got rid of Guerrero several weeks later, ensuring he could run Smackdown in peace.

If these epic rivalries are any indication of what could happen when all is said and done between Teddy Long and John Laurinaitis, every Superstar, Diva and member of the WWE Universe will need to keep a close eye on what goes down, because the WWE may never be the same again.