SAN DIEGO - Zack Ryder's night went from bad to worse on Raw SuperShow, as Long Island Iced-Z's crush, Eve, kissed his friend, John Cena, after Kane tried to kidnap her. Then, The Big Red Monster viciously tossed a wheelchair-bound Ryder off the stage, leaving him motionless on the ground before he had to be taken out of the arena on a stretcher by emergency medical professionals.

Did John Cena embrace the hate? (PHOTOS | WATCH)
John Cena came before the WWE Unvierse, denying any involvement with Eve, apologizing to his friend, Zack Ryder. After talking to the WWE Universe about his match against The Rock at WrestleMania XXVIII (PREVIEW) and promising to defeat Kane in Sunday's Ambulance Match (PREVIEW), Cena was confronted by Long Island Iced-Z with a slap! When Ryder tried to hit his former friend a second time, Cena blocked him, causing the injured Superstar to fall to the mat. Then Kane appeared before a remorseful and frustrated Cena, congratulating him on embracing the hate by stealing his best friend's love. When Cena turned his back for a moment, Kane pushed a wheelchair-bound Ryder off the stage, leaving him to be stretchered out of the arena!

The extent of Ryder's injuries has yet to be determined, but WWE.com has learned that he was rushed to a San Diego trauma center for observation. 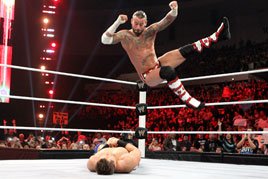 CM Punk def. The Miz (PHOTOS | WATCH)
Less than a week before Elimination Chamber, CM Punk continued to prove why he’s the WWE Champion, defeating The Miz with an Anaconda Vise. Will The Straight Edge Superstar reinforce why he’s The Best in the World this Sunday when he defends his title in the Elimination Chamber?

Eve kissed John Cena (WATCH)
Kane kidnapped Eve, taunting her and locking her in the back of an ambulance. John Cena ran to help, and she was freed before Kane could drive off with the former Divas Champion. Then Eve passionately kissed a stunned Cena, as a lovelorn Zack Ryder sadly witnessed. 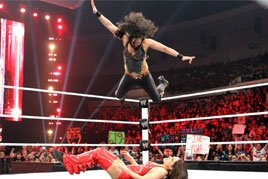 Tamina Snuka def. Brie Bella (PHOTOS | WATCH)
With a second consecutive victory on Raw, Tamina Snuka’s forward momentum continued. She thwarted The Bellas’ Twin Magic, defeating Brie. Tamina, the daughter of legendary WWE Hall of Famer Jimmy “Superfly” Snuka, is channeling the essence of her father, but will it be enough this Sunday when she challenges Beth Phoenix for the Divas Title at Elimination Chamber? (PREVIEW)

R-Truth def. Dolph Ziggler (PHOTOS | WATCH)
Dolph Ziggler’s showboating got the best of him, suffering another loss on his way to Elimination Chamber this Sunday. R-Truth earned a quick victory over the showoff, giving Little Jimmy another reason to cheer. 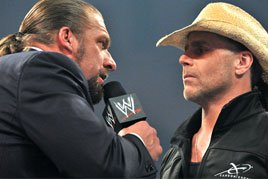 WWE Hall of Famer Shawn Michaels returned to Raw (PHOTOS | WATCH)
HBK confronted Triple H, begging for an answer to the question on everyone’s mind – why would he decline the chance to end Undertaker’s streak at WrestleMania XXVIII? The WWE COO said he’s not a sellout or a coward, but he doesn’t want to end The Deadman’s mystique because it's bad for business. Triple H said he, Michaels and Undertaker are "the end of an era," and he's "not the one to end that era." Then, Undertaker appeared on the TitanTron, revealing a shocking moment, taking a razor to his hair and proclaiming "vengeance will be mine." (Get HBK's Diary of a Heartbreak Kid eBook)

Randy Orton def. Big Show by Disqualification (PHOTOS | WATCH)
This past Friday on SmackDown, an explosive match between World Heavyweight Champion Daniel Bryan and Randy Orton resulted in an Orton-Big Show brawl that continued after the show went off the air (WATCH | EXCLUSIVE POST MATCH BRAWL),

On Raw, Daniel Bryan interrupted the match between two of his Elimination Chamber opponents, causing WWE's Apex Predator to defeat the giant by disqualification. After The Viper hit his opponent with a vicious RKO, Bryan – who was on commentary – slid into the ring at hit Orton and then The World’s Largest Athlete with the World Heavyweight Title, standing tall less than a week before Elimination Chamber. 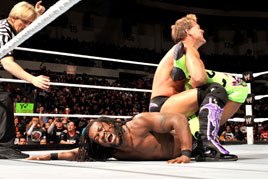 Chris Jericho def. Kofi Kingston (PHOTOS | WATCH)
After participating in the WWE Championship Elimination Chamber Debate, Jericho returned to singles action on Raw SuperShow. The first-ever Unidsputed Champion earned his first victory in almost a year and a half with a Codebreaker, defeating Kofi Kingston just six days before they meet at the pay-per-view.