Inspired by the Twitter war between foes John Cena and The Rock, the WWE Universe followed suit during Raw in debating the titanic WrestleMania clash. The highlights from the Cena-Rock social media spat spilled onto Monday night’s broadcast and gained steam overnight amongst WWE fans, whose tweets include the announcement of Shawn Michaels’ return and David Otunga’s foil-like footwear.

For days, the 140-character clash between the Cenation leader and The People’s Champion entertained the WWE Universe with pointed, colorful commentary directed at one another. While Cena provided his own footage of his 630-pound deadlift in the gym, The Great One stuck it to his rival from the set of his latest film. Not to be outdone, The Rock alluded to a potential face-to-face confrontation with Cena on Raw in just three weeks in Portland, Ore.

Who owned who, just about 50 days till WrestleMania XXVIII? You be the judge.

@TheRock: @JohnCena Settle down cowgirl. Your lemon panties are getting bunched up in your lady parts. #HustleLoyaltyVagisil

@JohnCena: Once again outclassed by #thefakeone man it would be a shame if Dwayne got beat by a guy with a mangina. Hey hollywood what u doin april 9?

@TheRock: @JohnCena @WWE #RAW 2/27. Portland, OR. The night The Rock slaps the feminine napkin out of John Cena. #UWhiningBitch

@JohnCena: How he used to be in WWE and once went to Wichita, and how good it was...u know before he left...and the whatever came back...only to say
@JohnCena: He was home and never leaving....only to leave again. Bring your boots movie star. Ill see u april 1st. Meanwhile ill do my job...
@JohnCena: One that I would never leave. The one I love. The one u left. #everyotherdaybesideswrestlemaina

@JohnCena: In Wichita today. Maybe my buddy Dwayne from #Teamfilmit will be here...probably not. But maybe ill be lucky enuff to get a message about

@TheRock: @WWE Saw the Cena video. You're a good man John - you'll be even better when you take your Wrestlemania ass kickin like a man. #TeamBringIt

@JohnCena: Lotta static bout Dwayne's absence in Topeka. No need to worry. He will be there April 1...then we settle it

@SimonNicolHD: Pretty interesting the fact that we haven't seen John Cena tonight will he attack Rock on the set of Jay Leno LMFAO !!! @WWE #Raw

@TFis_94: That line about the Rock leaving wwe, was an absolute classic by Cena! @WWE #Raw

@Evil_Mr_McMahon: So @JohnCena has more Facebook fans than the @TheRock yet Rock has more twitter followers than Cena. Which is more important???!!!! #Raw

@KevinEck_WWE: Gotta give that round to Cena. Great line about Rock leaving WWE. #wwe #raw

@itsME_DJon: This is going to be one of the best WrestleMania's yet!!!! Rock v. Cena, Undertaker v. HHH (maybe), hopefully Punk v. Jericho! #WWE #RAW

@theisb: Michael Cole just referred to the Rock and John Cena's "Twitter War." Is this what he means when he says he was a war correspondent? #Raw 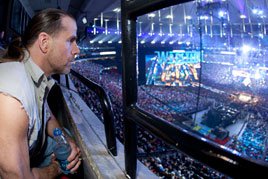 It looks like Shawn Michaels will need to DVR next week’s episode of Cold Case. “Mr. Hall of Fame” will be away from his San Antonio home and miles away in San Diego for Raw SuperShow. At the behest of WWE EVP John Laurinaitis, The Heartbreak Kid returns to WWE the night before hearts swell for Valentine’s Day.

The Showstopper was on-hand last year for the “War of Wars” and has unquestionably witnessed The Undertaker’s macabre pursuit of a WrestleMania rematch with Michaels’ best friend, Triple H (who, appropriately enough, was noted as wearing a tie of a DX green hue this week). With The Game’s refusal to face The Phenom, HBK’s role on Raw remains unclear but one must wonder if Michaels will be the only legendary Superstar heading to California on Monday night.

Will The Deadman – who sits engulfed by images of The Game from last year’s Show of Shows confrontation – rise again from his perch for the impromptu reunion of the D-Generation X duo? Will Undertaker yet have his bout on The Grandest Stage of Them All?

@Zaid_Gaston: Can't wait for Shawn Michaels on #RAW next week. "No he's not coming, Shawns in the middle of no where hunting" haha Triple H

@jrFulk: I will laugh so hard, if they put Shawn Michaels & Triple H vs. Undertaker - Handicap match @ Mania!!! Seriously, don't doubt it. #RAW

@tattoosANDlocs: Shawn Michaels back on #RAW next week. Will he be an addition to the roster, or #RAWSGM

@Stocky17: Triple threat match at #WM28, HHH vs Undertaker vs Shawn Michaels? It would be so good! #WWE #Raw

@Bella_Rayne_Y2J: Shawn Michaels returning next week to #RAW! Somewhere my pal @rieger_dylan is doing the pose and a crotch chop!

@StoreyXIV: Jesus and God are trending, as is Shawn Michaels. Remember when they tagged against Vince and Shane McMahon? #Raw

@Ericgarcia1994: @wwe #raw shawn michaels back next week i cant wait, but coming from @wwerawgm he could be lying. we will find out next week.

@Podswoggle: Shawn Michaels and John Laurinaitis are on the opposite ends of the charisma scale. #Raw #WWE

@_IDBC: Hey let's bring back HBK for a week to superkick some talented stars for no reason. #RAW 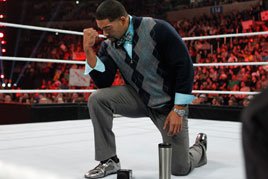 Rise of the Silver Loafer

Prior to getting pummeled by Sheamus, David Otunga crossed through the ropes in pewter penny loafers to plea with WWE’s Board of Directors and pray for his boss (Laurinaitis) to be kept in power. Inciting a fury in WWE fans, the (Tim) Tebow-ing Harvard Law grad turned even more heads with his aluminum foil footwear – perhaps a knockoff of those slick-to-death Nike Foamposite “Galaxys” dropping later this month. Citing “The Wizard of Oz,” the WWE Universe called out Otunga’s kicks as a cross between Dorothy and Tin Man, though after facing The Great White, he’s probably feeling more like the Cowardly Lion. (WATCH)

@Deshawnbills: Otunga Should Have Tapped His Heels Together With Them Shoes #WWE #RAW

@onecountkickout: I need to get me some Otunga aluminum foil shoes. @WWE #RAW

@BigL500: If Otunga was Tebow, does that make Sheamus Tom Brady? #Raw

@OMJason: Otunga's shoes and bow tie should be a tag team. #raw

@DeaconKirby: I like David Otunga’s shoes , I gotta know where he got them from #Raw

@KyleSBaxter: #Raw Sheamus on a hot roll. So much for Otunga. Loser.

@DollaBilMF: I can't hear anything. Otunga's shoes are too loud #Raw

@CaneDewey: Otunga pulls a Tebow and all is right with the world. Let us pray. #RAW

@WWERockCena: David Otunga! Can u sue someone for beating you too quickly in a wrestling match...? #WWE #Raw #SuperShow Great White Sheamus

@BenJMorse: "It's been a traumatic few weeks for Eve." But she still hits that pose on the entrance ramp with a smile. Trooper! #WWE #Raw

@MattDaviesEsq: Totally don't remember anyone else coming out and remaining silent, eh CM Punk. Y2J might have a point. #raw

@JustineyLou: Ahhhh Randy Orton is awesome :) Had to take a jump up to RKO the Great Kahli #RAW

@Otaibi2010: Jericho tells the truth.. Wins the 6 pack challenge.. And proves that he's the best in the world at what he does! #RAW