For weeks, strange video clips had made their way into WWE broadcasts, eerily announcing that on Jan. 2, 2012, “It Begins.” This left the WWE Universe wondering what exactly would begin as the New Year kicks off. No one could have guessed that these clips were heralding the return of Chris Jericho. The former six-time World Champion shocked the world with his appearance Monday night in Memphis on Raw SuperShow. Though Jericho didn’t explain the reasoning behind his reappearance, he left the WWE Universe reeling, having surprised it yet again with the help of viral videos. (Visit Jericho's Facebook page)

Before YouTube existed, Chris Jericho found ways to spread his message to millions. In the summer of 1999, a “Countdown to the Millennium” clock appeared during WWE broadcasts. Members of the WWE Universe who did the math figured out that the clock wasn’t ticking away the time until the year 2000 arrived, as it was set to expire on Monday, Aug. 9, 1999, months before the new millennium was set to begin. This left them wondering what was going to happen that night, and what it meant for the future of WWE.

They got their answer when the clock hit zero during Raw that night, when Jericho announced his arrival in grand fashion, interrupting The Rock to declare that “Raw is Jericho.”

Nearly a decade later, as Jericho prepared to make an impactful homecoming to WWE, he hacked into WWE television once again to set off a viral campaign leading up to his return. This time, Jericho was a little more cryptic. The videos looked like something out of The Matrix, as numbers flew all around, eventually ending with “SaveUs.222” flashing on the screen. Later videos showed complex math formulas and messages that dared the WWE Universe to “break the code.” Those with a few semesters of calculus under their belts may have been able to do so quickly, though the majority of our fans argued back and forth over the Internet, devising their own theories about what the “code” could be.

Jericho let the world in on the solution to the code on the Nov. 19, 2007 edition of Raw. As then-WWE Champion Randy Orton addressed the WWE Universe, Jericho filled in the final pieces of the puzzle, showing that the answer was “SaveUs.Y2J,” and that he was ready to wreak havoc on Monday nights once again. He did exactly that during the following three years, capturing the World Heavyweight Championship and WWE Tag Team Championships, as well as a record-setting ninth Intercontinental Title.

Despite Jericho’s penchant for the cryptic, the themes behind the videos leading up to his return Monday night seem a little out of character. Rather than rely on the mathematic, the 2008 Superstar of the Year went philosophic this time. The eerie videos show a young boy in a school uniform sitting at the only desk in a classroom, writing in a notebook as a girl watches from behind him. The videos speak of a prophet returning to punish the unjust, not to mention the beginning of the end of the world as we know it.

Members of the WWE Universe analyzed every frame of each of the six videos, looking for hints as to who would be returning on the second day of 2012. They found allusions to the former World Champion’s speech patterns within the narration of the videos, though this was not a rock-solid argument. 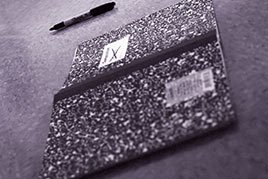 If anything, scrupulous studiers seemed to have come closest to finding an answer in the fifth video, when the boy’s notebook falls onto the floor. It appears that the name “Chris” is crossed out on the front of the book, leading to speculation that Jericho was indeed on his way back to WWE.

Still, there are plenty of questions left unanswered between the videos and Jericho’s shocking appearance on Raw SuperShow. For example, the fourth video refers to a mysterious “she.” According to the clip, “she” holds the answers to the return of Chris Jericho, and that when he calls her, he will begin to reclaim what is rightfully his.

What does all this mean for the WWE? No one but Chris Jericho knows, and until he decides to let the rest of the world in on his ultimate goals, all the WWE Universe can do is conjecture. Certainly, Jericho has left us plenty of material to do precisely that.