In what may have been Superstars’ final thrusts for Slammy Award consideration before the live three-hour special, the events of WWE Raw SuperShow in Tampa, Fla., also laid the foundation for WWE TLC: Tables, Ladders & Chairs by use of tools-turned-weaponry.

Nash’s first WWE match in eight years
In his first WWE match since 2003, Kevin Nash crushed Santino Marella on Monday night in preparation for a Ladder Match against Triple H at WWE TLC. It may have taken him a few moments longer than it did for Diesel to win the WWE Championship from Bob Backlund in record time back in ’94, but the goliath pounded his way past speculation of long-rusted ring abilities.

Since he annihilated his ex-best friend with The Game’s own signature weapon, Nash has made the sledgehammer his personal Mjölnir. Though Big Daddy Cool kept his cool by not smashing Santino into pieces, by the way Nash wielded the hardware and the look in his eyes, the WWE COO must bring his “I nearly beat The Phenom at WrestleMania XXVII” game to WWE TLC.

@HD388: Really wish Nash would come back out & smash that belt with his sledgehammer just so we can get a new belt #Raw

@TBOLTBMF: @WWE TLC is shaping up to be an awesome PPV.Kevin Nash/Triple H ladder match should be very interesting!!! #wwe #raw

@theConnorR: Nash vs HHH in a sledgehammer match? Someone's career will come to an end. #RAW

@CharlesShane; The sledgehammer doubles as a cane for Kevin Nash #WWE #RAW

@Staplesgirl25: It was good to see Kevin Nash fighting again last night after 8 years even though it was an easy win because he was fighting Santino #Raw 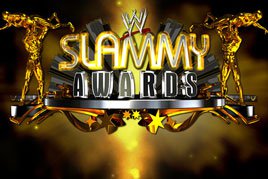 Slammy power in your hands
Days before the prestigious Slammy Awards return on Raw SuperShow, the WWE Universe is casting votes on WWE.com for Superstar of the Year and, naturally, campaigning for the candidates on Twitter. Among them, somewhere, the once sour-pussed “Angry Miz Girl” is wickedly smiling while voting for Mark Henry.

The nominee pool – Alberto Del Rio, CM Punk, John Cena, The Miz, The World’s Strongest Man and Randy Orton – is comprised of champions, guttersnipes, brutes and rebels but all the best in WWE today. While conflicted in their important and difficult decision, WWE fans await the revelation of the winner – selected by their clicks – and cannot wait to learn which other Superstars, moments and more will win the coveted golden grapplers. Most of all, the WWE Universe looks forward to the three-hour live special for potential new must-see moments in Slammy history … though none ever can truly rival Mr. McMahon’s spiritedly memorable performance of “Stand Back.”

@OhHay_TerriK: I'm gonna vote for cm punk for superstar of the year. Either him or mizzzzzz #raw #slammys.

@FearlessRiOT: Del Rio did all of that in 2011 and STILL will NOT win Superstar of the Year. #WWE #RAW

@TheSteamer: If the WWE really wants to make ppl laugh (ok, maybe just me) theyd have Duggan and Harley Race fighting in the back next week #Raw #Slammys

@DeaconKirby: Well Im gonna vote for Mark Henry as Superstar of the YEAR.. i know CM PUNK gonna win, but it took mark 15 years to get here #Slammys #Raw

@stringjr05: @WWE Last year at the slammys we had a slammy for Micheal Coles "And I Quotes" This year we need a slammy for "The Best @CMPunk Quote!" #Raw

@ninja2911: I just want to take one of the Slammys and absolutely bash it right through the vocal cords of Michael Cole... #wwe #raw

@KSchadWrestling: #Raw If John Cena wins Superstar of the Year again then the Slammy's are definitely rigged. 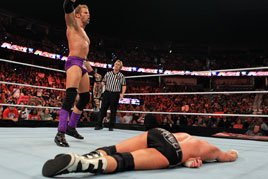 Ziggler, the true #Heel
Obsessive tweeters in the WWE Universe, for weeks, have recognized U.S. Champion Dolph Ziggler’s subtle incorporation of his Twitter handle into his ring trunks and hoodie (which many WWE fans have pleaded with WWE Shop for production). The showoff went one step further on Raw SuperShow, referring to himself as “everyone’s favorite Hashtag Heel” … who, we know for sure, will not be everyone’s favorite WWE Champion come WWE TLC.

The U.S. Champion suffered a “sunken chest” (as so eloquently noted by Jerry Lawler) thanks to Sheamus’ 10-part body clubbing and subsequent match-ending Brogue Kick, in part due to newly christened No. 1 contender to the U.S. Title, Zack Ryder.

Dolph was the only man on Raw SuperShow whose defeat led to the loss of his critical opportunity to contend for the WWE Title on pay-per-view. His emphasis on showing off his social trendiness may be misguiding the U.S. Champion at a time when he needs to focus on a quite merited challenger. True it may be, reciting this fact most likely means that Ziggler won’t be retweeting the link to this article.

@TysonicBoom: @HEELZiggler has to keep reminding everyone he's a #HEEL because after watching #RAW every week you have to love the #showoff #nooffense

@deboma: if anyone deserves to hold two titles at the same time, its ziggler. #HEEL #raw @WWE

@HighRiskMoves: I think Ryder wins the US Title at TLC & it marks the beginning of new eras for both him & Ziggler. Dolph will enter main event scene #RAW

Legends in the house
If you missed the most vibrant video that aired during Raw SuperShow, you MUST take a moment to watch the teaser announcement of “WWE Legends’ House” on WWE Network.

Done? Perfect. You can now join the rest of the now frenzied WWE fan base in salivating after the retro-tastic and electronic hype video dropped on Monday night.

The most interactive channel in television history has already set the tone as being unlike anything ever seen in sports-entertainment. But now, the WWE Universe wants to know which legendary WWE competitors will be part of the reality-inspired TV series. “Rowdy” Roddy Piper? Iron Sheik? “Superfly” Jimmy Snuka? A romance-seeking Mae Young? More importantly, how many bathrooms will said house actually have?

@CenaApproved: Legends House? gosh this #WWENetwork makes it so hard to wait till next year ! AMAZING Promo <3 #RAW

@bettydoekehoe: Dying to know who's living in the WWE network "Legend House".... Hopefully Mean Gene won't get wrapped up in this travesty, lol. #Raw #WWE

@TheSteamer: Ok, we will now take bets on who will be in Legends House? I've got $500 on Greg Valentine. #Raw

@AseelSalem: @WWE Network's Legends House will have the same concept as Big Brother? If yes, then It will be a great show! #Raw

@keepthebeat929: Not going to lie, kind of marking out for Legends House. @WWE #raw

@Ustareth: I want a Future Endeavored shirt with Brodus Clay on the front. #RAW @WWE

@Ustareth: I want a Future Endeavored shirt with Brodus Clay on the front. #RAW @WWE

@rossace23: Just saw an ad on #RAW for Kane coming back with his mask on. That's gonna be very very badass #BringBackTheMask

@grifted: watched Zack Ryder win his right for a Shot for the US title woo woo woo you know it bro, hope he brings home the gold #WWE #raw

@thewrestlercafe: it's a not a dream @mikethemiz defeat @RandyOrton by count out. Thanks to Wade Barrett#Raw

@HEELMachoMoose: It worked for Wade Barrett, so Zack Ryder thought he'd do it on the same show and bury the importance of a Randy Orton feud. Touche Zack #Raw