The Day After ROCK: Your Tweets

The kilo-wattage culled by The Most Electrifying Man in All of Entertainment is still powering the WWE Universe well after the three-hour edition of RAW GETS ROCKED. The pre-Survivor Series surge brought the live return of not just the Twitter-trendsetting Rock but also Mick Foley and some ghosts of John Cena’s past, as both the Cenation leader and The Great One prepare for their immediate future: The “Awesome Truth” in a massive clash in Madison Square Garden on Sunday.

It’s the day after RAW GETS ROCKED. Let’s see what you thought … 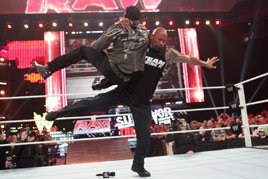 The Rock says … trending!
The Rock demonstrated why he’s the true People’s Champion on Monday night, extending his reach from the live arena in Boston to the vast Twitter world, where The Great One proved he had the pull to produce tweet trends at a moment’s notice. Twice in a single TV segment, The Rock laid a social media smackdown and got the world circulating his unique vulgate – even at the expense of his tag team partner this Sunday. But is all the talk getting ahead of the tag encounter at hand with The Miz & R-Truth?

@DouceyD: The wrestling fan boys in Boston are going gaga for The Rock tonight. #WWE #Raw

@ShowtimeCR: Let's see how long it takes for The Rock to trend tonight! @WWE #Raw #RAWGetsROCKED

@RKOViper369: The Rock is in the best shape he has ever been @WWE #RAW 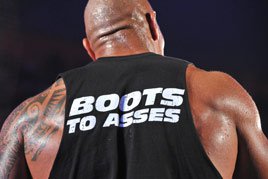 Boots to asses
It wasn’t just some print on the back of The Rock’s newest T-shirt. The phrase “Boots to asses” was put into action Monday night by The Great One, who provided the WWE Universe with a quick demo of this foot-to-tukkus movement. The Miz, R-Truth and even the re-emerging Hardcore Legend himself, Mick Foley, all suffered personalized Rock Bottoms over the course of the evening. (WATCH)

Like WWE fans on Twitter, many Superstars also easily adopted the ideology of The Great One, colliding for strong positioning prior to Survivor Series. While WWE Champion Alberto Del Rio devastated No. 1 contender CM Punk both behind the curtain and in the ring, the 10 battle-ready combatants of the Team Orton-Team Barrett (now with a new member among its ranks) couldn’t even wait till their elimination tag bout in Madison Square Garden.

@submarine_racer So @TheRock managed to create the first ever "live" RT and trend with #BootsToAsses on #RAW ! Truly spectacular!

@9_Hendo Within minutes #CenasLadyParts and #BootsToAsses are trending. @TheRock proves once again, he can still outshine anyone! #RAW

@bigpauliepump Wow, @JohnCena and @TheRock are really seperating themselves from everyone else in the business. @wwe #raw #bootstoasses

@Incandescere That #BootsToAsses chant is off. It's clear they can't find a proper rhythm. #Raw

@tlovesmetal My current 3 fave words are #BootsToAsses think that @TheRock may have something to do with that! @WWE #RAW 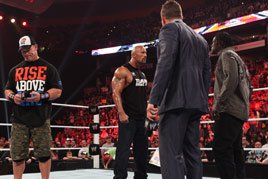 Cena’s lady parts
Never before, never again … will “Cena’s lady parts” be a trending topic on Twitter. At least Cena hopes. The Great One’s allusion to his rival’s supposed androgyny was just as popular as #BootsToAsses, finding its way into the Twitter feeds worldwide.

What’s under the camo shorts is irrelevant – right? The thing to extract for Sunday is the straight-up disjointedness of the pairing. Like two quarreling siblings, The Rock and Cena – sans eye contact – fiercely addressed one another in the face their Survivor Series opponents and shared some pretty spite-filled statements that were, frankly, worse than the barbs they projected at The Awesome Truth!

@mjarvi83 Both Boots to Asses and #CenasLadyParts are trending, The Rock is a genius at starting trends #WWE #Raw

@Karl_Jerome211 Was wondering why #CenasLadyparts was trending worldwide. Now I get it. @TheRock #Raw

@SephiHakubi As I stress out because after a convention, I still have a CCENT exam, i see #CenasLadyParts trending. Why did I miss this #Raw? 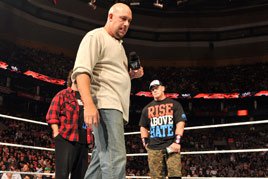 “Booyah!”
B-Squared? John Cena’s ex-back-up b-boy, Bull Buchanan, brought simply no “booyah” with him when he made his WWE return on RAW GETS ROCKED. (WATCH) Instead of reppin’ the Cenation leader, the retired competitor bashed the “Reunion” star in Boston during Foley’s presentation of “John Cena, This is Your Life!” Without a beat, at that.

Toss in Cena’s dad and little league coach and the 10-time WWE Champion seemed half-mortified under the brim of his hat. He took it in stride, though. Will that same signature perseverance save Cena and The Rock from imploding this Sunday?

@Big_Paol You know you're getting old when you actually remember who Bull Buchanan is. #RAW

@APOCrunch Laughing my ASS off right now. John Cena - This is your horribly embarrassing life! :-) #RAW

@MelanieLDN OMG! From under which rock did they find Bull Buchanan? #WWE #Raw

@se7enthpower If Bull Buchanan showed 1% of the personality he showed tonight on #Raw back in 2003, maybe Vince wouldn't have fired him.

@iAmNELLEZ_ Who would have ever thought we'd see Bull Buchanan in a @WWE ring again? #RAW

@LaidBack_T John Cena This is Your Life, OMG this is going to be so funny #RAW

@mjarvi83 A video montage This is your life John Cena on #WWE #Raw, now I have seen it all

@Bkey313 Are you kidding me This is your life part two featuring John Cena now on #raw only @realMickFoley could make this come ture.

@JackBringIt The Rock's "This is your life" still beats John Cena's. #RAW

@MrFreshleMania OH MY GOODNESS I ACTUALLY CRIED DURING THAT "THIS IS YOUR LIFE VIDEO", AND THEN CRIED AND LAUGHED AT EVERYTHING ELSE #Raw #SuperShow #Booyah

@marlenee_wienne Hahahaha Foley made me laugh with the This is your Life xD but Cena's dad took the cake! Bahaha lmao #raw

@Lucks4Losers: You don't think anybody has a better dropkick than Kofi? How about Orton? Dolph? Cody? Ted? Eve? Cena? #RAW #WWE
@FOrDsLaDyWWEFan: Dolph is definitely a Coward for running from Mason After Vickie Caused a DQ thanks to Morrison for Throwing Dolph Back to Mason :) #Raw
@2000awesome: Nice new theme song,Cody. @WWE #RAW
@Zaid_Gaston: They need to rename 'Team Orton' to 'Team U.N' #Raw

@JacobsCandidate @realMickFoley Mick, please stay in @WWE - it's where you belong!! U were so great tonight on #Raw! FOLEY IS GOOD #MickFoley