Is "The Kliq" history?

“The Kliq” was, at one point, the strongest unit in sports-entertainment. This inseparable crew of locker room buddies - including Triple H, Kevin Nash and Shawn Michaels - were among the most influential Superstars in WWE just before the dawn of the Attitude Era. Their friendship has withstood every trial and tribulation, until now.

Nash made sure that was clear during his first appearance on Raw SuperShow since his brutal sledgehammer attack on the WWE’s COO two weeks ago. WWE.com is left wondering: Is The Kliq history?

Monday night in Liverpool, England, Nash took the WWE Universe back to The Kliq’s early days, when it was just “Big Daddy Cool” and HBK. More than a decade ago, a young Triple H visited the WWE locker room with his trainer, Killer Kowalski, and made an impression on the two champions, who took The Game, then an aristocrat known as Hunter Hearst-Helmsley, under their wing. They introduced him to Sean Waltman (a.k.a. The 1-2-3 Kid/X-Pac) and Scott Hall (a.k.a. Razor Ramon), and the five traveled the roads together, becoming extremely close, like brothers.

The first major test of their friendship came in 1996, when Nash and Hall decided to leave WWE for WCW. After their final match at Madison Square Garden, Michaels and Triple H entered the ring to say goodbye to their close friends in front of the WWE Universe. This angered WWE officials and Triple H bore the brunt of the punishment. His career stalled for several months, until he captured the Intercontinental Championship in late 1996 and followed it up by being crowned the 1997 King of the Ring. Still, The Game never blamed his friends for any of his shortcomings. (See video of the MSG incident)

The Kliq bond flourished until 2003, when Nash returned to WWE after a quadriceps injury. Triple H and Michaels were in the middle of a bitter rivalry with Nash stuck in between until The Game turned on him, leading to several matches over the World Heavyweight Title, including a barbaric Hell in a Cell Match (WATCH). The King of Kings escaped with the championship and the two moved past their disagreements and resumed their friendships.

After Nash’s return at the 2011 Royal Rumble was well received by the WWE Universe, “Big Daddy Cool” got the itch again. He wanted to “get the band back together,” but as the 7-foot former WWE Champion claimed, The Game never bothered to even return his phone calls. 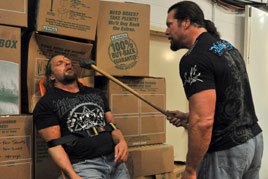 This left Nash feeling betrayed. In his mind, there was only one way to get his friend’s attention and also prove that he can still go. That led to the vicious sledgehammer attack on a defenseless Triple H. It may have also pushed what was once one of the closest friendships in sports-entertainment past the point of no return.

With his Kliq cohorts out of the picture, Nash may have singlehandedly changed things between all of them forever.

There’s no doubt that Triple H will seek retribution for Nash’s blindside attack (WATCH) when The Game returns from his injury in roughly one month to face the man he demanded be hired back. Nash claims that’s exactly what he wanted. However, both men are blinded by rage and may not be able to properly decide if this is worth risking a once-in-a-lifetime friendship over.

One has to consider what the rest of the Kliq must have been thinking as they watched Nash viciously injure The Game. They have to be wondering if Nash’s actions have broken a bond more than 15 years old beyond repair.