The pink slips were passed out Monday night by a frustrated Game in WWE Chief Operating Officer Triple H, struggling to endure the prevalent suggestion of a WWE-wide conspiracy. With The Miz and R-Truth fired, Raw is two Superstars lighter today, not to mention one commentator fewer (for now) given World Heavyweight Champion Mark Henry’s beastly attack on Jerry Lawler.

The conspiracy grows, roster shrinks
CM Punk’s bold accusations against WWE Executive Vice President John Laurinaitis and the alleged motives hiding behind the executive’s “stooge, corporate eyes” further fanned the flames of conspiracy in WWE on Monday night. (WATCH) Despite Laurinaitis’ COO-overruled attempt to wish Punk the best in his future endeavors, that infamous statement was reserved for The Miz and R-Truth by night’s end.

The heads are turning in every direction for the presumed source behind all the confusion and controversy shrouding the rule of the Chief Operating Officer. Triple H seems genuine in his pledge to Punk that he’s on the level, but the WWE Universe has fallen for that one before. In the rubble, two Superstars who called out the conspiracy well before anyone else are now forced from the equation and effectively quieted – for better or worse. But why Miz and Truth? And who, exactly, is pulling the strings of the ever-growing puzzle with more questions than season five of Lost?

@davidcoffey: It could pay off with a "Corporate Kliq" conspiracy but that still seems so predictable it won't be much fun. #Raw #WWE

@FemmeJoMo: Maybe Morrison's a conspiracy victim too... Or somehow part of it. But poor Miz - and in Cleveland no less. #Raw

@MShadows17: I guess spreading conspiracy theories doesn't really move one ahead in the #WWE. #Raw

@mcknightlm: I think the @WWE Superstar words of the year are.....Conspiracy and Fruity Pebbles! #RAW

@NobueIto: Laurinaitis being at the heart of the "conspiracy" is too obvious. I hope there's a more interesting plot twist on the way. #WWE #RAW

@FutureDivaWWE: This whole conspiracy thing is getting big. Look what you started R Truth!!! #Raw 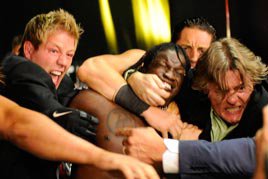 Swagger aligns with Vickie and steps up
In case you missed it, within the blink of an eye, Jack Swagger and Vickie Guerrero finally made it official on WWE Raw SuperShow. The All-American American is now under the tutelage of the resident cougar who’s managed World Champions and more in recent years. While U.S. Champion Dolph Ziggler’s role in the equation lingers, some nostalgic members of the WWE Universe have their fingers crossed for the emergence of a new collective not unlike the Heenan Family coached by WWE Hall of Famer Bobby “The Brain.”

The dapper Swagger’s power move in aligning with Vickie intrigued the WWE Universe. Those who sneered at the partnership at least took note of The All-American American’s participation in forcing the terminated Miz and R-Truth out of the arena in Cleveland in Raw’s closing moments. The strapping Superstar allegiance of Swagger, Wade Barrett and William Regal following Triple H’s beckoning was an unexpected sight. Is this the start of a new Swagger? Study up on The All-American American in video profile.

@HEATcomic: Of course, to really be the Heenan Family, Jack Swagger will need to find furry boots and antlers. #WWE #RAW 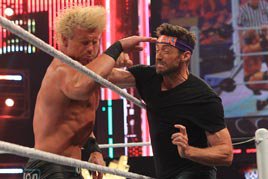 Hugh Jackman embraces inner broski
After catching some exclusive footage from "Real Steel," the WWE Universe warmly embraced star Hugh Jackman on Monday night, especially after the on-screen mutant fame showed his claws and – SNIKT! – coached Zack Ryder to an underdog victory over the U.S. Champion. Siding with the Internet Champion, the acclaimed actor slid on the appropriate Ryder headband in celebration with Long Island Iced-Z. Jackman a broski?! Woo-Woo-Wolverine! You know it!

@GoForwardNS: Nice to see Hugh Jackman really enjoying and taking part in a lot of the @WWE #RAW show last night. Once of the best hosts they've had.

@WWEsAngel_Nef: Dear @wwe Hugh Jackman is freaking awesome because he is hot and has claws. #Wwe #raw

@ImperiousRix: If this tag team division thing actually does take off, I can see Punk and Cena as a new iteration of the Mega Powers... #RAW

@BryanIsWWE: World's Strongest Slam by Mark Henry in the ring & then out of the ring through the announce table. #RAW #RAWSuperShow

@straight_edge76: Mark Henry is shooting up my list of best current characters in the WWE, right next to Punk and Rhodes. #Raw

@WrestlingFemme: I really think Beth Phoenix should be the Divas Champion. Her and Mark Henry - Two Dominating Forces in the @WWE. Perfect. #Raw