The clock ticks down to the prestigious Night of Champions pay-per-view and the WWE Universe is reeling from the turbulent showdown between CM Punk and WWE Chief Operating Officer Triple H in their last face-to-face encounter before words make way for fists, Pedigrees and any other weaponry in their No Disqualification Match.

It’s the day after Raw, “ninja.” Let’s see what you thought …

What was Punk going to say?
It seems – at least for now – that we’ll never know what words were ready to slip from CM Punk’s mouth in the closing moments of Monday’s WWE Raw SuperShow. Why was The "Voice of the Voiceless" cut off? Who pulled the plug? What was going to be so satisfying on Sunday, according to Punk? (WATCH)

“The time to slay The Game is long overdue.” “Because Stephanie and I are in love.” “Because, Triple H, I’m your father.” “Help computer.” Some WWE fans believe Punk was on the verge of announcing that he could be taking over the operations throne. (WHO CAN REPLACE THE GAME?) These are all solidly wild guesses but, frankly, shots in the dark. Whatever vile, smarmy comment Punk prepared to project forth, it was gunning for The Game’s throat – much like he’ll be in the squared circle this Sunday at Night of Champions.

Maybe once all is said and done in their No Disqualification Match, The Straight Edge Superstar will pick up the mic and finish the statement he started to utter on Monday … that is, if he can survive The Cerebral Assassin.

@KnightGirlSarah: Shutting the mic off on punk love it! #RAW @WWEUNIVERSE

@Podjohnnyringo: BTW, CM Punk was going to say it'll be satisfying because the Kings of Wrestling are going to help. You're welcome. #Raw

@FearlessRiOT: They just cut CM Punk off. Why people always cuttin' him off?! #WWE #RAW

@loadedsean17: @WWE The face-off between #cmpunk and hunter was #tremendous and fierce. It was one helluva way to close the show. #raw #wwe @PWRshow

@kimcheesal: Best line from @CMPunk tonight: "your pants that probably don't have a back pocket for some weird reason." #WWE #RAW

@WOZ93: @WWE #Raw CM Punk has really proven himself for the past months as a great superstar! cantwait for sunday!

@iluvbirds5: @wwe #raw Was not too long ago that Punk talked at the fans like they were lower than dirt. Changed his act again. What's next?? 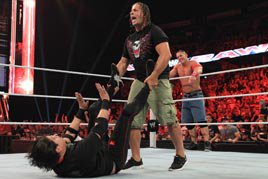 Shorts and “jorts” connection
John Cena and WWE Hall of Famer Bret Hart share multiple WWE Championship reigns but the lowest common denominator on Monday night, literally, was Cena and The “Hit Man’s” shorts – jean and cargo, respectively. While Hart has been known to wear half-legged denim himself since his return to action last January, the five-time WWE Champion changed it up slightly in Ottawa. Still, The Excellence of Execution had the sneakers-and-shorts look in full effect for his synced efforts beside Cena this week against WWE Champion Alberto Del Rio & Ricardo Rodriguez.

@AwwwDammmnnn: So ummm @BretHart changed out of his jean jorts so we wouldn't confuse him w @JohnCena? Like THAT could ever happen? #raw 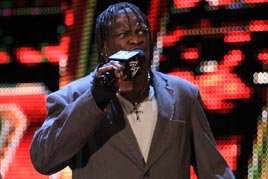 “Ninja, please”
Two straight weeks of references that arguably skew Teenage Mutant Ninja Turtles. Last Monday, Kevin Nash was exposed as the man beneath the Super Shredder in the live-action Turtles movie sequel, aptly dubbed “Secret of the Ooze.” Perhaps inspired by the information publicly alluded to by CM Punk the previous week, R-Truth “rapped ninja” this past Raw.

“Ninja, please,” Truth exclaimed. “Hi-yah!” Was he referring to The Miz a.k.a. Miz-elangelo, who was just as confused with that emphatic, peculiar statement? Who is said ninja?

Aside from his (now expected) bizarre vulgate, Truth also surprised many with his subtle change of gear, richly enhanced by a suit jacket – not unlike the one glorified by the WWE Universe last week. Truth & Miz intend on capturing the WWE Tag Team Titles this Sunday and win or lose, the conspiracy theorist is starting to dress the part of champion.

@pshuck: Ninja please. Has to be line of the night on #raw.

@The_B Ben Borthwick: I think if WWE are ever stuck for a name for a future Pay Per View they should totally call it 'Ninja Please' #Raw

@MrsROrtonsVoice: Do I have to say it? Ninja please! Give @mikethemiz and R-Truth the tag team titles! #WWE #RAW

@osoluvsbeatles: @WWE @WWEUniverse I am a WWE fan because I'm the girl that cheers, boos, and claps in her room while watching #Raw and Smackdown on her TV.

@Dean_Stahl: @JRsBBQ's announcing on @WWE #Raw is audial comfort food. Quite the #Slobberknocker

@MrsZigglesworth: RT @WWFRAWISWAR: We would not mind Phil Brooks as WWE Chairman for 90 days #WWE #RAW

@SeanColvin: ZackRyder wasn't on RAW this week #areyouseriousbro? #RAW and @WWE should know by now that his matches are #slobberknocker candidates!!!