COLUMBUS, Ohio – As the clock continues to tick down to Night of Champions in less than two weeks, the circumstances surrounding each title match grow ever more contentious and controversial.

The first two Superstars eliminated from the bout were The Prince of Parkour and A-Ry, followed by Barrett. After that, Sheamus and Christian battled to a double count-out, leaving Cena to battle Ziggler & Swagger. The two rivals were forced to work together, but their bickering and Cena’s domination allowed him to eliminate both.

Having won for his squad, Cena was then ambushed by WWE Champion Alberto Del Rio, but The Cenation Commander-in-Chief beat back the attack and sent Del Rio scurrying.

John Cena called out WWE Champion Alberto Del Rio (WATCH: PART 1 | PART 2)
WWE Champion Alberto Del Rio can’t avoid John Cena forever. The Mexican Aristocrat was a no-show on both the WWE Raw SuperShow and SuperSmackDown last week, and this week he addressed Cena from a safe distance outside the ring. He taunted his Night of Champions opponent before a host of Superstars – who Del Rio had swayed earlier in the evening – converged on The Cenation Commander-in-Chief.

Before Wade Barrett, Jack Swagger, Dolph Ziggler and Christian could debilitate Cena, Sheamus, John Morrison and Alex Riley charged the ring to even the score. When they did, SmackDown General Manager Theodore Long intervened and arranged an Eight-Man Elimination Tag Team Match.

World Heavyweight Champion Randy Orton def. Heath Slater (WATCH | PHOTOS)
Add another chapter to Randy Orton’s book of anger management issues. After being thrashed by Mark Henry after his Steel Cage victory on SuperSmackDown, The World Heavyweight Champion needed a target on which to unleash his anger. Unfortunately for Heath Slater, he proved a suitable punching bag. The former WWE Tag Team Champion got rocked by The Viper, who showed why he’s so treacherous while sending a message to The World’s Strongest Man.

Zack Ryder & Jerry “The King” Lawler def. David Otunga & Michael McGillicutty (WATCH | PHOTOS)
After dubbing former WWE Tag Team Champions David Otunga & Michael McGillicutty “boring,” Jerry “The King” Lawler accepted their challenge to face them with a partner of his choosing. Lawler looked to the opposite of boring when scouting his partner and enlisted the help of Long Island Iced-Z, Zack Ryder. Although it appeared Lawler had the match wrapped up against McGillicutty, Ryder eagerly begged to break off a piece of the action for himself. When “King” agreed to tag him in, the self-proclaimed “WWE Internet Champion” made quick work of his opponent, scoring the three-count for him and his WWE Hall of Fame partner.

CM Punk def. R-Truth; stipulation added to Triple H vs. Punk (WATCH: PART 1 | PART 2 | PHOTOS)
The conspiracy against R-Truth continues, or so he’d have you believe. The unbalanced Superstar ambushed CM Punk last week as he fought The Miz. This week, Punk would be up against more of the same from these two. This time, however, it would be Truth’s partner who would attempt to interfere. Unlike last week, though, Miz got booted from the arena before the match could end. As a result, Punk recovered and managed to prevail.

Afterward, Punk’s Night of Champions’ opponent, Triple H, emerged to thicken the plot. WWE’s Chief Operating Officer challenged The Second City Savior to make theirs a No Disqualification Match. Punk said he would comply with The Game’s stipulation only if Triple H agreed to quit as COO were he to lose. A confident King of Kings readily agreed.

Beth Phoenix def. Eve in a No. 1 Contender’s Match (WATCH | PHOTOS)
Beth Phoenix is determined to change the landscape of the Divas division. And now, she’s earned the opportunity to do just that. 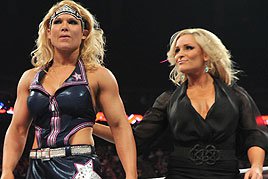 The Glamazon defeated Eve in a No. 1 Contenders Match and will now face Divas Champion Kelly Kelly, who already defeated her at SummerSlam, in a title match at Night of Champions.

The Divas Champion as well as Beth’s fellow “Diva of Doom,” Natalya, each looked on from ringside as the match unfolded. After the bell sounded, Kelly went to check on Eve, but Natalya pulled her back down and slammed her into the arena floor. As Kelly writhed in pain, Natalya stepped into the ring and helped Beth celebrate her victory.

WWE Tag Team Champions Evan Bourne & Kofi Kingston def. Jinder Mahal & The Great Khali; title match announced for Night of Champions  (WATCH | PHOTOS)
The relationship between Jinder Mahal and The Great Khali continues to disintegrate. After Khali lost to Sheamus on SuperSmackDown, Mahal warned him he was on thin ice. This week, the two teamed up against WWE Tag Team Champions Evan Bourne & Kofi Kingston in a non-title match. Instead of leveraging their clear size advantage, Mahal & Khali failed to get on the same page, allowing Air Boom to cut them off at the knees for the victory.

Later in the evening, partners The Miz & R-Truth announced they will challenge Bourne & Kingston for their titles at Night of Champions.

WWE COO Triple H fired Kevin Nash (WATCH | PHOTOS)
Exhibiting shades of his father-in-law, Mr. McMahon, WWE Chief Operating Officer Triple H asserted his executive power and fired longtime friend Kevin Nash in a move that shocked both the WWE Universe and Big Daddy Cool himself. The unpleasant altercation had been building for weeks, as Nash continued to both defy and provoke The Game.

The mounting issues between the two finally came to a head. Punk was addressing the WWE Universe when Big Daddy Cool interrupted, trading verbal jabs with The Second City Savior. Before the two could trade blows, The Game came out to ease tensions. Nash informed him, though, that WWE wasn’t big enough for both he and Punk, that one of them would have to go. The Game then revealed he’d received security camera footage from L.A.’s STAPLES Center from the night of SummerSlam. Turns out, Nash had snuck into the COO’s office and sent a text to himself from Triple H’s phone, instigating his attack on CM Punk that night. In other words, Big Daddy Cool had been lying to his good friend for weeks. That’s when Triple H finally handed Nash his walking papers.

When the COO attempted to leave, Nash blocked his exit. The Game was having none of it, and instead, clocked the seven-footer in the face before striding out of the ring.