SAN DIEGO – Still reeling from the contentious conclusion of SummerSlam, the WWE Universe received little in the way of clarity from WWE’s Chief Operating Officer Triple H, whose officiating miscue during the anticipated Undisputed WWE Championship Match at The Biggest Event of the Summer was the first of several injustices to befall former WWE Champions John Cena and CM Punk at the STAPLES Center.

Yet, 24 hours removed from a shocking series of events that resulted in Alberto Del Rio’s Money in the Bank-assisted WWE Championship victory, Raw was host to the newly minted champion’s first-ever title defense against longtime nemesis and 619 native Rey Mysterio.

Undisputed WWE Champion Alberto Del Rio def. Rey Mysterio (WATCH | PHOTOS)
Three weeks after winning – and losing – the WWE Championship in a single night on Raw, Rey Mysterio wanted nothing more than to reclaim the illustrious prize in the heart of the San Diego. After nailing Del Rio in the face with his iconic 619, it seemed as though The Ultimate Underdog would begin his second WWE Title reign in his hometown, live on Raw. However, as Mysterio soared through the air to further punish Del Rio with a diving splash, the defending champion countered by getting his knees up.

The Mexican Aristocrat wasn’t satisfied with simply pinning Mysterio and defending his new title. After putting down Rey-Rey for the three-count, Del Rio ruthlessly applied his tendon-snapping cross armbreaker submission hold. If John Cena hadn’t charged the ring to chase off the arrogant aggressor, Del Rio would have no doubt broken Mysterio’s arm. The scheming Superstar fled to the entrance ramp with his personal ring announcer Ricardo Rodriguez, but The Cenation Commander-in-Chief assured the dastardly titleholder that his days as Undisputed WWE Champion were numbered.

“You are not a champion,” Cena warned. “You’re a target.”

The reigning titleholders tried to keep “Air” Bourne & The Dreadlocked Dynamo grounded, but were ultimately no match for this high-energy tandem. After Kingston stunned McGillicutty – his former NXT Rookie – with Trouble in Paradise, Bourne nailed the prone WWE Tag Team Champion with his patented Shooting Star Press to pick up the win. 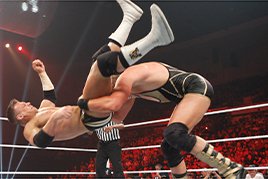 Things were tense as Vickie & Dolph argued at the announce table for Riley’s joust with Jack Swagger, with the U.S. Title holder insisting he would have decimated A-Ry if Vickie hadn’t tried to help. Frustrated, Vickie eventually got up from the announce table and tried her hand at disruption again, this time using WWE Hall of Famer Jim Ross’ iconic cowboy hat to distract the referee and Riley long enough for The All-American American to capitalize and score the pin. Ziggler then gleefully and disrespectfully stomped J.R.’s hat before leaving the ringside area.

Later, Swagger approached Vickie in the locker room area, suggesting that like all great managers throughout WWE history – including Bobby “The Brain” and “Classy” Freddie Blassie – Vickie would do incredibly well with multiple clients. Showing appreciation for her underhanded assist the former World Heavyweight Champion gave the calculating “cougar” plenty to think about.

Triple H calls himself “The Game,” and according to his longtime friend Kevin Nash, he’s been playing some games as well. Big Daddy Cool revealed that  at SummerSlam, he received a text from Triple H’s phone that instructed him – on no uncertain terms – to take out whoever won the Undisputed WWE Championship Match.

As the competitor to simultaneously become the Undisputed Champion and make himself the latest victim of “Big Sexy’s” dreaded Jackknife Powerbomb, Punk had reason to speak up following Nash’s revelation, accusing the veteran grappler of being a liar and placing blame for the incident on his massive shoulders. The two former WWE Champions laid into one another with a succession of cutting remarks, but it was Punk would get the last word when he vowed to obtain the truth about Nash’s SummerSlam involvement from the WWE COO himself.

One night after successfully defending her butterfly-emblazoned championship against the mighty Glamazon, Kelly Kelly teamed with the gorgeous Eve to take on the devious Bella Twins. In spite of Nikki & Brie’s ruthless tactics, Eve sealed a victory with an impressive moonsault off the top rope.

Natalya & Beth came out to the stage after the bout to offer their congratulations ... and what appeared to be an unspoken threat.

The Miz sounded off on Jared from Subway (WATCH | PHOTOS)
The Miz might have a distaste for most things, but he evidently loves to “eat fresh.” Taking aim at Subway’s weight-loss wunderkind Jared Fogle, who was sitting in the front row, The Awesome One remarked that he could be a better spokesperson for the sandwich shop and lauded the deliciousness of Subway’s Oven Crisp Chicken Sandwich. And to think, Miz usually makes the WWE Universe lose its appetite!

John Morrison def. R-Truth in a Falls Count Anywhere Match (WATCH | PHOTOS)
Over the last several weeks, the unpredictable R-Truth has confided to the WWE Universe and his imaginary entourage that he’s afraid of a few things; namely ladders, heights and spiders. But after taking an incredible beating at the hands of his former friend John Morrison in a hard-hitting Falls Count Anywhere Match, he’ll likely add The Guru of Greatness to that list.

With his extensive parkour expertise allowing him to dominate in nearly any environment, Morrison held nothing back against Truth, and with good reason. Taken out of action by the rugged grappler twice in recent months, a revitalized Prince of Parkour took the action outside the ring and never let up. After suplexing Truth into a seated position on an announce chair, Morrison showed the conspiracy theorist “what’s up” with a running knee smash.

When The Game counted Cena’s shoulders to the mat at SummerSlam and named Punk the Undisputed WWE Champion, it was pretty obvious that the Cenation leader’s foot was on the bottom rope. The crowd saw it, the announcers saw it, the ring crew saw it and millions of viewers watching at home saw it – but The Cerebral Assassin did not. The WWE COO kicked off Raw to acknowledge his mistake as the bout’s special guest referee, but since there has never been instant replay in WWE, he would not reverse his hotly contested decision.

As for his friend Kevin Nash’s post-match assault on The Second City Savior that allowed Del Rio to capitalize and steal a WWE Title win, Triple H had no explanation. Nash had asked for skybox tickets and The Game provided them, but The Cerebral Assassin denied any involvement in what transpired after the SummerSlam main event. Big Daddy Cool would appear later on Raw to speak for himself. 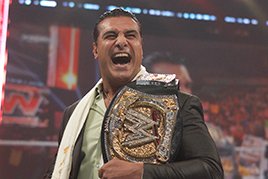 The King of Kings then introduced another individual who takes great pleasure in speaking for himself: Undisputed WWE Champion Alberto Del Rio! Affirming that he just couldn’t resist cashing in his Money in the Bank contract after Nash’s ring-shaking Jackknife Powerbomb left The Straight Edge Superstar in a daze, The Mexican Aristocrat vowed to deliver a crushing defeat to San Diego’s own Rey Mysterio later in the night, preventing The Master of the 619 from bringing the prestigious title home to San Diego.

Raw results, May 9, 2022: Becky Lynch makes a statement with a vicious attack on Asuka

SmackDown results, May 13, 2022: RK-Bro lands first strike on The Bloodline before next week’s battle