SAN JOSE — With only six days to go before WWE Champion John Cena faces WWE Champion CM Punk for the Undisputed WWE Championship at SummerSlam, Triple H made it clear that there will be only one titleholder at the end of the night. The lengths WWE’s new COO went to tonight in order to guarantee a fair outcome shocked the entire WWE Universe.

WWE Champion John Cena and WWE Champion CM Punk signed the contract for their Undisputed WWE Title Match (WATCH | PHOTOS)
The WWE Universe expected a tense confrontation in this contract signing and that’s exactly what they got. Mediated by Triple H and WWE Executive Vice President of Talent Relations John Laurinaitis, the summit started off ugly when CM Punk showed a video of The Rock bashing John Cena on Facebook. Tearing The Champ’s catchphrases and clothing to shreds, The Great One made a hilarious mockery of the powerful Superstar.

It was a damning monologue, but one Cena took in stride. After all, The Champ realized some people may have a problem with him, but he’s always been more concerned with the fans that are in his corner. Since 2002, the WWE Champion has been a proud and hardworking Superstar who gives every bit of his energy to positively representing the company. And while Cena was busting his hump, Punk was off complaining that he didn’t get fair treatment.

It was a strong argument that Triple H respected, but The Second City Saint was quick to strike back. Accusing The Champ of being a failed bodybuilder who settled for a career as a sports-entertainer, Punk claimed that he worked harder to get to where he is than Cena ever could. On Sunday, The Straight Edge Superstar would prove this by beating his rival in the center of the ring.

Undeterred, Cena made it clear that if Punk fails on Sunday he’ll be nothing more than a one hit wonder. With tensions now at a boil, both Superstars agreed that the talking had gone on long enough and stood face-to-face. But when Punk took a swing at The Champ, he connected with Mr. Laurinaitis instead. It was a melee from there with Punk and Cena brawling in the ring while the COO attempted to pull them apart.

When The Game finally got some order, the tattooed titleholder stood on the outside of the ring looking in at Triple H and The Champ. In that unique moment, there were two WWE Champions. Come Sunday, there will be only one. 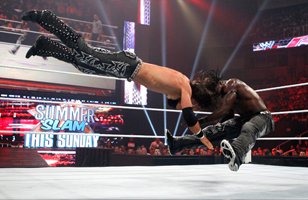 R-Truth def. John Morrison (WATCH | PHOTOS)
After spending more than three months on the sidelines with a serious neck injury, John Morrison finally had the opportunity to go one-on-one with the man who put him there — R-Truth.

Looking to get a receipt on the dangerous Superstar, The Guru of Greatness came at Truth with a flurry of unpredictable offense — even leaping out of the ring onto his opponent. It was a thrilling effort from Morrison, but JoMo is clearly still trying to find his feet following his injury. By targeting the neck, Truth was able to debilitate his adversary and win the bout.

Alex Riley def. United States Champion Dolph Ziggler by Disqualification (WATCH | PHOTOS)
Some guys just don’t know how to take criticism. Furious with Alex Riley’s suggestion that he drop Vickie Guerrero and succeed on his own merit, Dolph Ziggler was ready to make A-Ry regret his remarks tonight. Bringing the fight to Riley, the brash Superstar seemed destined for victory, but Vickie interfered in the action before either man could triumph.

The loudmouth’s intrusion led to the official giving Riley the win via disqualification. Clearly irritated with the loss, Ziggler bickered with his associate after the bout before the cougar stormed away from the ring in a rage.

Beth Phoenix def. Eve (WATCH | PHOTOS)
Last Monday night, Beth Phoenix shocked the WWE Universe when she brutalized Divas Champion Kelly Kelly after winning a battle royal to become the No. 1 contender to the beauty’s title. Tonight, she made it clear that the attack was no accident.

After smashing the talented Eve, The Glamazon grabbed the microphone and again stated that the era of pretty Divas dominating WWE is over. Yet, just as Beth made her way to the locker room, she was cracked out of nowhere by a fiery Kelly Kelly.

Not one to be intimidated, the gorgeous competitor is definitely ready for Sunday’s showdown with the powerful Glamazon. 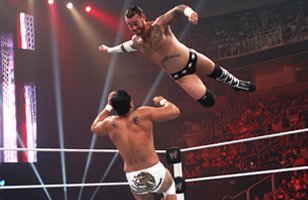 WWE Champion CM Punk def. Alberto Del Rio (WATCH | PHOTOS)
Irate, but unsurprised by Triple H’s announcement earlier in the evening, CM Punk stated that the COO would be wise to stay out of his way at SummerSlam. But, for now, The Straight Edge Superstar was focused on an immediate challenge — Alberto Del Rio.

Following Cena’s victory over Swagger, Punk knew he had to come up big in his match against The Mexican Aristocrat. After all, how would it look if the controversial competitor was beaten mere days before the biggest bout of his career? Rising to the occasion, Punk was vicious against the Money in the Bank winner, picking Del Rio apart with blistering strikes before putting him to bed with the Go To Sleep. If Cena sent Punk a message before, “the voice of the voiceless” responded here.

The Miz def. Kofi Kingston (WATCH | PHOTOS)
What was supposed to be a rematch between Rey Mysterio and The Miz quickly spiraled out of control when The Awesome One brutally attacked his rival before Mysterio even had a chance to enter the ring. (WATCH) It was an audacious assault, but The Miz didn’t have much time to gloat as Triple H immediately sent word that the smug Superstar would now face Kofi Kingston.

Before The Cleveland Screamer could protest, The Dreadlocked Dynamo launched himself at his opponent, battering The Miz with his patented controlled frenzy. The rapid attack was nearly too much for the former WWE Champion to handle, but the devious Superstar survived, nailing the Skull-Crushing Finale out of nowhere for the win. 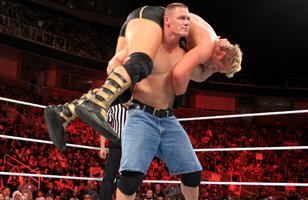 WWE Champion John Cena def. Jack Swagger (WATCH | PHOTOS)
John Cena isn’t the type of competitor who cracks under pressure. Moments after trading strong words with the special guest referee in his Undisputed WWE Championship Match against CM Punk at SummerSlam, The Champ had to lock up with the always dangerous Jack Swagger.

A standout collegiate wrestler and former World Heavyweight Champion, “The All-American American” is not a Superstar to be taken lightly, but Cena didn’t let his opponent’s pedigree intimidate him. Battering the big man before putting him down with an Attitude Adjustment, the West Newbury, Mass.-native sent a clear message to both Punk and Triple H — The Champ is here.

Believing that a bout of this magnitude is too important to risk outside interference or underhanded maneuvers, WWE’s Chief Operating Officer revealed that he’s enlisted the help of the one man he knows who can get the job done right — himself.

As if that wasn’t enough to stir up the WWE Universe, Triple H then announced that Cena and Punk will sign their SummerSlam contract tonight.