Raw results: The people have spoken

BALTIMORE – Let freedom ring! One night after WWE swept into Washington D.C. for Capitol Punishment, democracy continued to bloom as the WWE Universe exercised their right to vote thanks to a special, three-hour Raw: Power to the People.

Unfortunately, uncontrollable difficulties created by an influx of heavy voting traffic resulted in not every one of the more-than 697,000 recorded votes to be properly counted. To read more about these technical issues and how they affected the final tallies, click here.

The only question that remained was under which stipulation would the six fight? The WWE Universe determined they would battle in an Elimination Match (79%), far surpassing the one fall to a finish (15%) and 20-minute time limit (6%) options.

When the bell rang, the tension reverberating between the six Superstars was clearly evident. Hot off his massive victory over Miz, A-Ry appeared pumped. He took the fight to Christian and his former boss like a veteran ring leader. Although the aggression was impressive, Riley found himself the first to be eliminated. Next up, Miz and R-Truth would fall in close succession, leaving Christian to tackle both Cena & Orton.

Captain Charisma grew so excited at having eliminated the World Heavyweight Champion that he appeared not to remember The Champ remained in the bout. As Christian occupied himself with Cena, The Viper slithered in and nailed him with a surprise RKO. The move allowed the WWE Champion to snap on the STF, forcing Christian to tap out and handing Cena’s squad the victory.

Shawn Michaels and Raw Roulette to return to Raw next week
Vegas, baby, Vegas! All the action takes place in Sin City, Las Vegas, next Monday night when Shawn Michaels returns to Raw. The WWE Hall of Famer will be on hand during one of WWE’s most exciting nights, Raw Roulette.

Michael Cole def. Vickie Guerrero in a Dance Competition (WATCH | PHOTOS)
All hail the Cole-aroonie! Michael Cole busted out a few “unique” dance moves to slay Vickie Guerrero in a Dance Competition. The WWE Universe took matters into their collective hands and voted for the Raw announcer to compete against the shrieking violet. Cole collected 47% of the vote while Jerry Lawler grabbed 39% and Booker T cleared 14%.

Daniel Bryan def. Cody Rhodes in a No Count-out Match (WATCH | PHOTOS)
All the paper bags in the world can’t mask the ugliness of Cody Rhodes’ behavior lately. The narcissistic Superstar was scheduled to face off against Daniel Bryan in a match with the stipulation to be determined by the WWE Universe. With a total of 51%, a No Count-out Match triumphed over a Paper Bag Match at 43% and a Collegiate Rules Match at 6%. 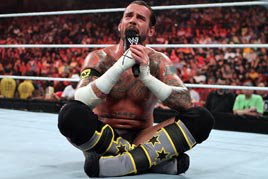 At the end of the bout, Bryan emerged victorious over his self-fawning foe. Rhodes, however, tried to save face. With help from his cohort, Ted DiBiase, the masked man leveled the submission specialist with a Cross Rhodes before slipping a paper bag over his head.

As if his victory weren’t enough of a laurel to rest upon, The Second City Savior went on to explain that his WWE contract expires the day of Money in the Bank, taking place in his hometown of Chicago. Punk then informed the WWE Universe that he not only intends to win the WWE Championship from John Cena, he intends to take the title with him when he exits WWE. 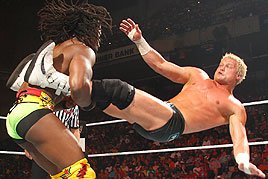 Kofi Kingston def. U.S. Champion Dolph Ziggler in a 2-out-of-3 Falls Match by Disqualification (WATCH: PART 1 | PART 2 | PHOTOS)
Research and destroy. Those three words best sum up Dolph Ziggler’s approach to Kofi Kingston. For weeks, the bombastic blond scouted Kofi, studying his moves and pinpointing his vulnerabilities. It all paid off at Capitol Punishment when Ziggler defeated The Dreadlock Dynamo to become U.S. Champion. At Raw: Power to the People, the freshly-minted champion faultered, however, after the WWE Universe chose 2-out-of-3 falls as the stipulation with 51% over Vickie Guerrero Banned From Ringside (31%) and Submission (18%).

With the Superstars tied up at one fall apiece, Ziggler punched Kofi in the head with a microphone causing him to be disqualified and allowing him to retain the title since a title cannot change hands on a disqualification. 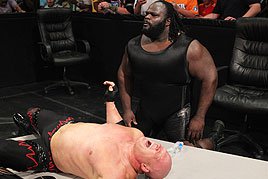 Kane def. Mark Henry in an Arm Wrestling Contest by Disqualification (WATCH | PHOTOS)
After his scary-strong body slam of Big Show at Capitol Punishment the night before – that poor announce table didn’t stand a chance – Mark Henry reupped for more devastation, this time against Show’s former tag team partner, Kane. As designated by the WWE Universe, the two titans clashed in an Arm Wrestling Contest (52%). The contest, which was chosen rather than an Over the Top Rope Match (35%) or a Body Slam Match (13%), showcased some menacing muscle.

In the end, The Big Red Monster would prevail by disqualification when Henry reached across the table and clocked his opponent. Henry then craved a sequel to his earlier slaughter. As he had done the night before with The World’s Largest Athlete, he hoisted up his adversary and hurled him mercilessly through the announce table with The World’s Strongest Slam.

Mason Ryan def. Evan Bourne (WATCH | PHOTOS)
Evan Bourne was forced to compete in a flight vs. might duel when Mason Ryan captured the majority of votes (51%), topping both Sin Cara (30%) and Jack Swagger (19%). Despite some high-altitude heroics on the part of Bourne, the massive Welshman pummeled his much smaller opponent for the victory. 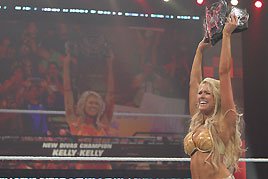 Kelly Kelly def. WWE Divas Champion Brie Bella (WATCH | PHOTOS)
The people have spoken – and so has Kelly Kelly, loud and clear. After being chosen to take on WWE Divas Champion Brie Bella, Kelly Kelly (53%), who beat out Beth Phoenix (36%) and Eve (11%), took full advantage. With Brie’s equally tricky twin, Nikki, looking on, Kelly relieved the former champion of the title and began her very first championship reign with the butterfly-emblazoned title.

Raw GM arranged Triple Threat Match to determine No. 1 contender for WWE Title (WATCH)
Go ahead, Punk, keeping digging yourself deeper. The Second City Savior not only insulted the WWE Universe by flat-out telling them their choices during the night’s Raw: Power to the People would be horrible, he also insulted the anonymous Raw GM by insisting he get an opportunity to face WWE Champion John Cena for the title at Money in the Bank in Chicago next month. All this led the GM to force Punk to face both Alberto Del Rio and Rey Mysterio in a Triple Threat Match to determine the No. 1 contender for the WWE Title later tonight.