PORTLAND, Ore. – One night after WWE Over the Limit, several Superstars stepped over the line. It was a night that witnessed an “accidental” run down, a shocking beatdown and one of the most bizarre meltdowns in WWE history.

WWE Champion John Cena & Rey Mysterio def. CM Punk & R-Truth (WATCH | PHOTOS)
WWE Champion John Cena was clearly pained a night after suffering one of the worst pummelings of his career. Fresh off an “I Quit” Match against The Miz at WWE Over the Limit, The Champ was tapped to join Rey Mysterio in a tag team match against CM Punk & R-Truth with Bret Hart acting as special guest referee.

Despite a hard-charging effort by both Truth and his pious partner, Cena refused to let his battered and bruised body lie still. The Champ kicked out of sure pins and fought back with dogged determination. But even Cena’s steel-belted body has its limits. It would be up to WWE’s Littlest Big Man to carry the day for his team – a tall order he would fill with Herculian effort.

Rey capitalized on his elusive build and high-flying frame to hobble both Truth & Punk within seconds of one another. He then nailed Punk with a 619, but Hart wasn’t about to let him have all the fun. The WWE Hall of Famer, fed up with Punk’s in-ring antics, belted The Second City Savior across the jaw and locked him in the Sharpshooter, allowing Rey to pin his shoulders for the victory. 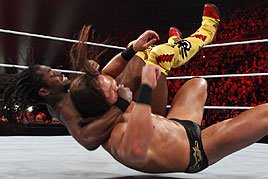 As the braided behemoth slid into the ring, her eight fellow Divas lined up on the opposite side of the canvas. Rather than chaos, however, there was collapse. Kharma unexpectedly dropped to her knees and began balling uncontrollably. 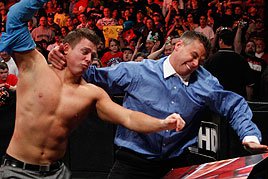 The Miz fired his assistant, Alex Riley, who then attacked his former boss (WATCH | PHOTOS)
And you think you’ve got a bad boss? After all Alex Riley’s done for The Miz, the guy deserves a raise. Instead, he received nothing but contempt in the wake of his boss’ loss to WWE Champion John Cena at WWE Over the Limit. The Cleveland Screamer angrily placed the blame for his loss at Riley’s feet, insulting him and asking the anonymous Raw GM for another title match.

When he was denied, Miz took his frustration out on Riley, firing him with extreme prejudice. A-Ry could only take so much unwarranted grief until, finally, he snapped. After Miz canned him, Riley unleashed weeks of pent-up rage against his former boss, attacking him and leaving him shamed in the ring. Disgruntled? Ya' think?

Michael Cole apologized (WATCH)
With rat tail tucked squarely between his legs, Michael Cole skulked down the entrance ramp to the announce table. He offered his humble apologies to his broadcast colleagues, including Jerry Lawler, just one night after losing to the WWE Hall of Famer in a Kiss My Foot Match at WWE Over the Limit. He also promised a more professional attitude and an end to the Cole Mine.

Jack Swagger def. Evan Bourne (WATCH | PHOTOS)
Nobody likes a sore winner, and Evan Bourne is no exception. "Air" Bourne faced off against Jack Swagger and proved he wasn’t about to let a little height advantage deter him. He went straight at The All-American American, nailing a bull’s-eye onto Swagger’s midsection. Michael Cole’s former trainer, however, would not be denied. After winning, The All-American American took a condescending victory lap, prompting Bourne to knock his egotistical opponent out of the ring.

Ricardo Rodriguez drove one of Alberto Del Rio’s cars into Big Show (WATCH)
After watching Big Show & Kane lose their WWE Tag Team Titles to David Otunga & Michael McGillicutty, Alberto Del Rio just couldn’t help himself. The Mexican Aristocrat had to rub the loss in their faces. His attitude - and a slap - prompted Big Show to give chase, but when The World’s Largest Athlete rounded a corner in the parking lot, Del Rio’s personal ring announcer, Ricardo Rodriguez “accidentally” ran over his leg with one of his boss’ luxury autos. 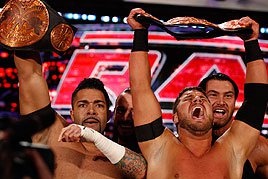 Their title reign kicks off just one night after Punk & Mason Ryan failed to capture the titles themselves at WWE Over the Limit. Prior to that bout, Big Show & Kane staged a preemptive strike on the New Nexus, leveling Otunga and McGillicutty in the locker room. In retaliation, Ryan distracted the referee while The Second City Savior, who had been on commentary, kicked Big Show in the back of the head to fell the two redwoods and help his disciples capture the prestigious titles.

Main event match arranged with Bret Hart as special referee  (PHOTOS)
R-Truth demonstrated once again that the voices in his head have cranked up the volume. Apparently, though, they’re still screaming the same tune. The conspiracy nut continues to blame, well, just about everybody but himself for him not receiving a WWE Title opportunity.

This week, he trained his crosshairs on two of WWE’s most beloved Superstars, WWE Hall of Famer Bret Hart and John Cena.

The Excellence of Execution explained that he showed up during last night’s Kiss My Foot Match at WWE Over the Limit to make sure Michael Cole experienced “the agony of de-feet.” Truth rudely interrupted the WWE Hall of Famer to spout off about all the “little Jimmys” in the crowd and refusing to kow-tow to them anymore.