KNOXVILLE, Tennessee - Sometimes destiny and determination are no match for deceit. With the opportunity to be the No. 1 contender for the WWE Title hanging in the balance, The Miz and his sycophantic follower, Alex Riley, weren't taking any chances.

The Miz def. Alberto Del Rio and Rey Mysterio in a Triple Threat Match; WWE Champion John Cena arranged an “I Quit” Match at Over the Limit (WATCH | PHOTOS)
Alex Riley’s road to redemption just got a little shorter. During The Miz’s Triple Threat Match against Alberto Del Rio and Rey Mysterio to determine the No. 1 contender for the WWE Title, Riley proved invaluable to his boss. Just as it appeared that Mysterio would pin The Mexican Aristocrat for the win, Miz’s boot-licking lackey interfered, pulling Del Rio from the ring.

The intrusion allowed The Miz to triumph, propelling him into a WWE Title Match against John Cena at Over the Limit. Upon hearing the news, The Champ addressed the WWE Universe, and The Cleveland Screamer in particular, explaining that he had decided to make their title match in two weeks an “I Quit” Match.

Then, when tensions had seemed to settle, R-Truth flew into the ring and attacked an unsuspecting Mysterio, declaring, "Now, that's what's up!" 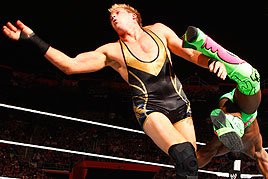 Lawler distracted The All-American American, allowing Kingston to retain. Afterward, the WWE Hall of Famer attacked Swagger and moved on with determination to his fellow announcer. As Swagger defended Cole and ushered him up the entrance ramp, he took it upon himself to accept Lawler’s challenge.

Jerry Lawler challenged Michael Cole to a match (WATCH | PHOTOS)
Everybody knows, you don’t talk about another man’s momma. For Michael Cole, however, the rules of decorum never seem to apply. The cheese-eating announcer proclaimed his ring “retirement” before taunting his favorite target, Jerry Lawler. As a result, the WWE Hall of Famer confronted Cole and challenged him to another match – raising the stakes considerably. King told his nemesis that were he to lose, he would personally induct Cole into the WWE Hall of Fame himself and even give him his Hall of Fame ring. For his part, the weasely announcer refused the test and scurried back into his Cole Mine. Eventually, Cole's trainer Jack Swagger ambushed Lawler, leaving him hurting on the arena floor. 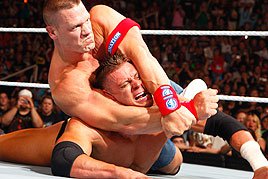 After disposing of his opponent, The Champ spotted Miz approaching. As if to send a clear – and agonizing – message, Cena administered several Attitude Adjustments to Miz’s lackey before locking on an excruciating STF.

Dolph Ziggler def. Santino Marella (WATCH | PHOTOS)
With his bothersome business associate, Vickie Guerrero, cheering him on, Dolph Ziggler tackled the challenge of Santino Marella. With the Italian in the ascendant, the “new and improved” Ziggler easily prevailed and demonstrated just why he could well represent, in the words of Guerrero, “the present and future of WWE.” 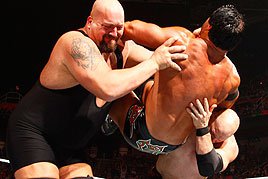 WWE Tag Team Champion Kane vs. Mason Ryan ended in a No Contest  (WATCH | PHOTOS)
Last week, Mason Ryan leveled both WWE Tag Team Champions Kane & Big Show. This week, retribution came in one size: XXXL. As Kane tangled with Ryan in a singles match, his partner attacked The New Nexus ringleader CM Punk as they watched outside the ring. The attack prompted the rest of the New Nexus disciples to converge on The World’s Largest Athlete and his partner.

Having dispensed of Ryan’s Nexus brethren as well, the WWE Tag Team Champions trained their considerable fury on the Welshman and demolished him with a double chokeslam.

Kelly Kelly & Eve def. Divas Champion Brie & Nikki Bella (WATCH | PHOTOS)
The Divas division continues to tremble – and with good reason. For the second week running, the braided behemoth Kharma targeted a Diva for punishment. This week, after Kelly Kelly & Eve managed to defeat Divas Champion Brie Bella & her sister Nikki, Kharma beat a path to the ring. Kelly Kelly exited, perhaps wisely, but Eve confronted the Divas’ tormentor. The braided behemoth laid out the Latina lovely before darting from the ring in an attempt to get her hands on Kelly Kelly. After she realized the blond beauty was out of her grasp, she returned to the canvas, where she punished Eve with an utter lack of compassion.

No. 1 Contender's Triple Threat Match arranged (WATCH | PHOTOS)
Three slots, four competitors. Something had to give. And so it was when Alberto Del Rio, Rey Mysterio, The Miz and R-Truth each made a strong case as to why they should be the No. 1 contender for the WWE Title against John Cena.

After The Mexican Aristocrat argued about the title being his destiny, The Master of the 619 cut him off at the knees, arguing otherwise. The Awesome One wasn’t about to be excluded, so he, naturally, shot off his mouth, too. Finally, Truth bragged about how he put John Morrison in the hospital with a neck injury in the wake of his attack last week and insisted he get an opportunity as well.

Raw’s anonymous General Manager, however, decided to arrange a Triple Threat Match to determine the No. 1 contender for the WWE Title – and, among the four, the rapping Superstar found himself odd man out.