MIAMI – The WWE Universe was clearly in the mood to celebrate. Less than 24 hours after President Barack Obama announced the death of al Qaeda leader Osama bin Laden, it was time to keep those spirits high by celebrating the biggest birthday party in TV history.

The Rock celebrated his birthday with the WWE Universe and surprise guest Mr. McMahon (WATCH: PART 1 | PART 2 | PHOTOS)
It’s a shame birthdays only come around once a year. With all the cake, candles and chaos, though, memories of The Rock’s celebratory bash should last at least that long.

With the evening going full force, The Great One thanked the fans in his hometown of Miami and the entire WWE Universe for helping him celebrate. He was then joined by surprise guest Mr. McMahon, who offered some uncharacteristically kind words before unspooling a video tribute to The Rock. Then Grammy-award winning recording artist Mya was introduced and led the crowd in a rendition of “Happy Birthday."

Celebrities offered shout-outs to The Rock (WATCH | PHOTOS)
None other than Samuel L. Jackson, Steve Carrell, Ellen DeGeneres, Dan Marino, Regis & Kelly, Miami Heat players LeBron James and Dwayne Wade and many more celebrities joined WWE Superstars in showing their love for The Rock throughout the course of the evening by offering best wishes to the birthday boy.

After the match, Ryan continued to crush his opponent. When Kane’s partner, Big Show, attempted a rescue, The New Nexus softened him up and allowed their behemoth to finish him off with a spear. Afterward, Ryan broke from the group and exited up the entrance ramp alone.

Rey Mysterio & U.S. Champion Kofi Kingston def. Drew McIntyre & Jack Swagger (WATCH | PHOTOS)
The Raw roster has been put on notice. One week after being drafted to the red brand, Rey Mysterio showed why he’s still WWE’s littlest big man. The Master of the 619 teamed with new United States Champion Kofi Kingston to tackle Drew McIntyre & Jack Swagger. With the newly-christened U.S. Champion in his corner, Mysterio pitted altitude against attitude and emerged the winner by pinning his Scottish opponent.

Having observed from ringside, Alberto Del Rio decided it was time for him to make an impression. The Mexican Aristocrat attempted to ambush his masked countryman, but Rey fended off his attack. 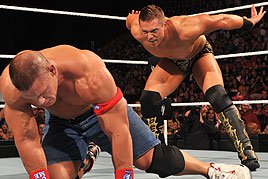 WWE Champion John Cena def. The Miz by Disqualification (WATCH | PHOTOS)
After losing his precious title at Extreme Rules to newly crowned WWE Champion John Cena, The Miz was served up a shot at redemption. Unfortunately for him, he whiffed. The night before, during his Triple Threat Steel Cage Match, The Cleveland Screamer succumbed to The Champ, who pinned him for the victory. Tonight, there would be no pin.

Instead, after a give-and-take bout, Miz’s lackey, Alex Riley, handed his boss the WWE Championship while the referee was distracted. The Awesome One used it to clobber his rival, hit him with a Skull Crushing Finale and secure a pin. But that wouldn’t be the last of it.

The ref noticed the title already in the ring and quickly realized what had transpired. As a result, he disqualified Miz, allowing The Champ to retain.

In the locker room area, Miz went on to chastise his lackey for interfering, explaining that he is not a quitter, and that he will never quit in his life. So, take that, A-Ry! 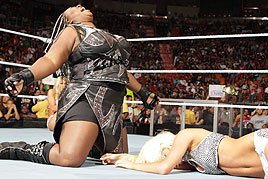 Kelly Kelly vs. Maryse ended in a No Contest; Kharma attacked (WATCH | PHOTOS)
Kharma is a … well, let’s just say you don’t want to mess with her. In the midst of a battling Kelly Kelly, Maryse was paid a visit by WWE’s newest Diva. The intimidating colossus interrupted the match and administered a punishing move to Maryse with a chilling lack of compassion. As she did, Kelly Kelly was left to watch in horror, no doubt wondering if she, too, will be forced to endure the wrath of Kharma.

As officials assisted JoMo to the locker room area, Truth’s paranoia propelled him to savagely attack Morrison again, leaving him immobile on the entrance ramp. 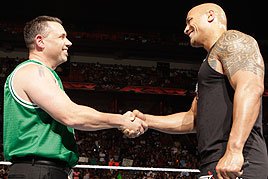 The Rock kicked off the biggest birthday party in TV history (WATCH: PART 1 | PART 2 | PHOTOS)
If anyone knows how to light up a crowd it’s The Rock. After all, you don’t earn the nickname The Most Electrifying Man in All of Entertainment by being a dim bulb. Prior to kicking off his birthday celebration, though, The Rock, as well as the rest of the audience, took time to acknowledge the events of the past 24 hours. As Lilian Garcia sang a moving rendition of the National Anthem, everyone in the American Airlines Arena reflected on the historic news that United States military personnel had killed Osama bin Laden nearly 10 years after the al Queda leader had coordinated the attacks of Sept. 11, 2001.

With the reassuring news buoying the festivities, The Great One led his hometown in a poignant rendition of the Pledge of Allegiance. He then encouraged them to have fun and celebrate his birthday in high style. Unfortunately, there’s always one party pooper in the crowd.

Michael Cole, on behalf of the anonymous Raw General Manager, interrupted The Rock as he addressed his frenzied fans. After ripping on Cole, The Brahma Bull invited him into the ring so that he might “apologize.” The cheese-eating announcer was then greeted with a Rock Bottom and The People’s Elbow.

When Rock exited to the roars of an appreciative crowd, he was joined by dancers from the Miami Heat basketball team and by rapper Pitbull! Time to par-tay!

Kevin Owens’ most shocking moments
Photos: Sheamus re-enters the Hall of U.S. Champions
Asuka’s greatest tapouts
WWE and MATE launch "WWE Now Down Under" content series
From fedoras to Fendi: The ever-evolving style of The Miz: WWE 24 extra
“Stone Cold” to join McIntyre on Drew & A on May 12 on Peacock
toggle menu
Sign in