RALEIGH, North Carolina – The WWE Universe experienced one wild ride as the 2011 WWE Draft unfolded before them like a runaway roller coaster. Emotions propelled viewers forward through a series of unexpected twists and jaw-dropping turns until, finally, they experienced a reversal of course that left many with a severe case of whiplash.

Dogged and determined, it would be the rebels in red who would triumph – thanks in large part to a mutinous Henry, who attacked his fellow boys in blue. The WWE Champion celebrated as he leveled one of his two Extreme Rules opponents, Cena, with a Skull Crushing Finale to capture the win for his squad. Good news for The Cleveland Screamer, right? Not so much.

Turns out Raw wanted back one of the most exciting Superstars in WWE history: The Cenation Commander-in-Chief.

2011 WWE Draft to continue on WWE.com (ARTICLE | FULL DRAFT COVERAGE)
Although many Superstars are either sulking or celebrating, the 2011 WWE Draft isn't over yet. Beginning at 12 noon ET, the Draft continues on WWE.com To keep up with all the dynamic developments, check back often. 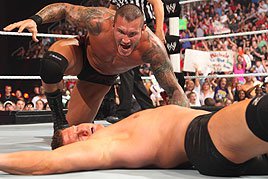 Jim Ross def. Michael Cole by Disqualification (WATCH | PHOTOS)
Who knew announcers could be so brutal? In a match pitting Michael Cole against Jim Ross, the current Raw announcer leaned heavily on his Extreme Rules tag team partner, Jack Swagger. When Good Ol’ J.R. slapped him clean across the face during their match, Cole called a “time out” to berate Ross and his Extreme Rules partner, Jerry “The King” Lawler. As he tried to exit the ring, Cole felt the sting of the barbecue king, who wailed on him until Swagger entered and nailed J.R. with a cheap shot, causing a disqualification.

The All-American American then attacked Lawler before circling back to Ross. While he snapped on an ankle lock, his weasel-like partner took off J.R.’s belt and began whipping him mercilessly. Thankfully for Ross, King was able to chase off the dastardly duo. The whole ugly incident prompted Raw’s anonymous General Manager to designate their match at Extreme Rules a tag team Country Whipping Match. 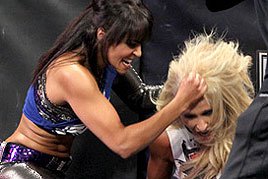 Eve def. Layla; Rey Mysterio drafted to Raw (WATCH | EXCLUSIVE: REY REACTS | PHOTOS)
Make no mistake, Lay-Cool is having some issues. During her match against Eve, to determine which brand would receive the next draft pick, Layla appeared in control. That is, until Michelle McCool, distracted her and allowed Eve to capitalize, further straining their BFF status. For her part, Eve reveled in the win, especially when the next draft pick was announced: Rey Mysterio.

John Morrison attacked R-Truth (WATCH | PHOTOS)
After his abhorrent, post-match behavior last week, during which he ambushed John Morrison and blew cigarette smoke in his face, R-Truth got lit up. The rapping Superstar lambasted the WWE Universe and explained that he was tired of trying to please them. After his tirade, Truth received his comeuppance. A justice seeking JoMo appeared and attacked his former tag team partner, leaving him hobbled. Oh, burn

The history of WWE remains rich with Superstars who have been traded to different brands and gone on to greater heights – WWE Champion The Miz, John Morrison and Triple H to name just a few. That in mind, the stakes were elevated when Superstars from both Raw and SmackDown participated in a 20-Man Battle Royal with the winning brand receiving a draft pick.

When the canvas had cleared, it was two boys in blue,  Kofi Kingston and WWE Tag Team Champion Big Show, who had prevailed. In the end, SmackDown had earned one unbelievable draftee: John Cena.