BRIDGEPORT, Connecticut – On an emotional evening for the WWE Universe, the WWE Champion's plans proved too clever by half, the former Divas Champion appeared to see double and the Rated-R Superstar offered up one heartfelt farewell.

First up in the random selection, Randy Orton and Dolph Ziggler squared off. During their match, members of The New Nexus, sans CM Punk, distracted The Viper long enough for Ziggler to wrap up a pin. Afterward, the men who had each been punted in the skull by Orton, lashed his beaten frame with a vengeful ferocity.

Entering next, R-Truth showed the bleach blond bomber what was up by eliminating him in fourth place. Truth’s former tag team partner, John Morrison, then jumped into the action. Leveraging his familiarity with The Shaman of Sexy, the rapping Superstar overcame the athletic assault.

Finally, it was John Cena’s turn. The Cenation Commander-in-Chief set aside his friendship with Truth and assailed him with a barrage of heavy hits. To his credit, though, Truth held steady, unwilling to relinquish the golden opportunity before him. As the two traded blows, however, they were attacked by WWE Champion The Miz and his lackey, Alex Riley, leading to a double disqualification.

Although the WWE Champion claimed there was no No. 1 contender, the Raw General Manager had other ideas. The anonymous GM announced that there were now two No. 1 contenders for the WWE Championship and that the match at Extreme Rules would be a Triple Threat Match between WWE Champion The Miz, Truth and Cena. Afterward, The Cenation Commander-in-Chief punished Riley, and Truth tackled Miz. Then the rapping Superstar and Cena found themselves in a shoving match before Truth exited the ring. 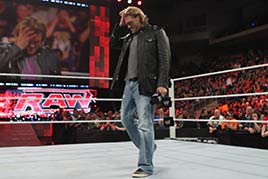 World Heavyweight Champion Edge announced his retirement (WATCH | PHOTOS | EXCLUSIVE DETAILS)
The illustrious career of 11-time World Champion Edge has come to an end. The Rated-R Superstar told the WWE Universe that, due to injury, he can no longer compete in the ring and will retire from competition.

After more than 13 years, The Ultimate Opportunist went out on top as the reigning World Heavyweight Champion – and offered an emotional farewell to his legion of admirers and fellow Superstars.

Jerry “The King” Lawler def. Jack Swagger; Extreme Rules match announced (WATCH | PHOTOS)
Michael Cole is the only undefeated Superstar on the WWE roster. Crazy? You bet. The “rat bastard” broadcaster’s perfect record of 1-0 will be on the line again, however, when he teams with Jack Swagger against Jerry “The King” Lawler & Jim Ross in a tag team match at Extreme Rules.

Lawler was allowed to name the match after defeating The All-American American in singles competition. As he and Swagger faced off, Good Ol’ J.R. and Cole looked on from their respective corners. Ross assisted his longtime friend with a well-timed distraction, allowing King to win, and prompting Cole to slap Swagger. As the cowardly announcer scurried off, his WWE Hall of Famer rival gleefully dropped his Extreme Rules bombshell.

The Corre def. “The Apple” (WATCH | PHOTOS)
Santino Marella enlisted three Superstar allies to exploit emerging cracks in The Corre once and for all. The Italian introduced “The Apple,” or Allied People Powered by Loathing Everything (The Corre stands for), consisting of Daniel Bryan, Mark Henry & Evan Bourne.

Unfortunately for the newly formed foursome, The Corre took a bite out of their alliance, overcoming their differences to suppress The Apple onslaught.

Sin Cara def. Primo (WATCH | PHOTOS)
A week after wowing the WWE Universe with a high-altitude debut, Sin Cara cemented his international celebrity status with an impressive victory over Primo. During the high-flying bout, his Puerto Rican opponent used some pretty punishing chops. The masked Superstar, however, flipped the script on Primo and nailed him with one last inspired aerial from atop the turnbuckle. 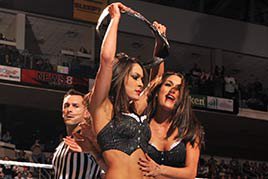 Brie Bella def. Divas Champion Eve (WATCH | PHOTOS)
In Italian, Bella means “beautiful.” In WWE, though, it’s come to mean something downright ugly. In her match against Divas Champion Eve, Brie Bella resorted to lowdown trickery to capture the Butterfly Title. After she and her sister, Nikki, failed to capitalize with “Twin Magic,” Brie took advantage when her twin nonetheless distracted Eve long enough for her to pin the lovely Latina.

Five-Man Gauntlet Match arranged
There’s no shortage of ambition in WWE. When John Cena expressed interest in battling WWE Champion The Miz again for another opportunity at the title, four other Superstars quickly joined the chorus, including Randy Orton, John Morrison, Dolph Ziggler and R-Truth.

Each man made their case for a title opportunity, until the anonymous Raw General Manager intervened. The GM debuted a new concept, a Five-Man Gauntlet Match, initially pitting two randomly selected Superstars and allowing the winner to continue on to face the next random opponent. The Superstar who can go the distance would become the No. 1 contender for the WWE Championship and will face The Miz at the Extreme Rules pay-per-view.