The Hell in a Cell curse

The pain of losing a Hell in a Cell Match can stick with a Superstar long after the bell has rung.

Of all 21 Hell in a Cell Matches before WWE Hell in a Cell 2011, none of the competitors who've entered the vile, satanic structure have ever left the same - some more impacted and scarred than others.
(WATCH: SPECIAL LOOK AT HELL)

Mick Foley
After making his career inside the Cell, Foley lost it all at No Way Out in 2000 when Triple H defeated him, forcing his retirement from WWE. 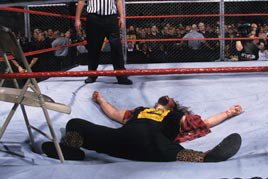 Fallout: Aside from the aforementioned retirement, Foley also suffered setbacks after his eventual return to the company. Returning to WWE four years later, he lost a handicap match to Evolution at WrestleMania XX, was beaten to a pulp by Randy Orton at Backlash and Speared through a flaming table by Edge at WrestleMania 22. To cap it off, Foley was humiliated by Mr. McMahon in order to protect Melina, only to have her dump him a few weeks later.

Kevin Nash
Nash went toe-to-toe with Triple H inside the cell at Backlash 2003 in an all-out war for the WWE Championship. Even though Nash put up a decent fight, The Game pounded him into submission with the steel steps, a chair to the skull and a Pedigree to the mat. 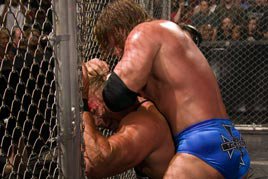 Fallout: Nash was absent from next month’s Vengeance and suffered a series of embarrassing setbacks on Raw, culminating inside the Elimination Chamber that August at SummerSlam, where he was the first person ejected from the structure. Nash left WWE immediately after and didn't return until the 2011 Royal Rumble Match.

Shawn Michaels
At 2004’s Badd Blood, Shawn Michaels and his former DX cohort, Triple H, battled it out inside the Cell with Mick Foley as a special guest referee. Although Michaels managed to land an elbow drop off of a ladder, The Game won the hellacious bout by flattening HBK with a Pedigree. 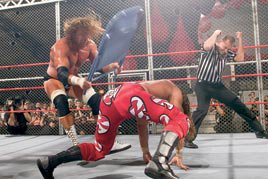 Fallout: Michaels suffered a torn meniscus in the bout, which cost him the World Heavyweight Championship at Taboo Tuesday and sidelined him for three months. He then suffered humiliation following his return to action when Kurt Angle eliminated him from the Royal Rumble and defeated him at WrestleMania a few months later. The Showstopper would fortunately bounce back, continue to perform en route to his induction in the WWE Hall of Fame.