Fortunately for us, Steve Austin has never been at a loss for words. True to form, when WWE.com spoke with the WWE Hall of Famer, he had a lot to say about his latest film, Tactical Force, his love of RVs, and the open road and the possibility of one day starring in a romantic comedy.

WWE.com: What was it like filming Tactical Force?
STEVE AUSTIN: It was challenging. I play the captain of a SWAT team, and we’re supposed to be in Los Angeles. But when we were filming there was snow on the ground. And as cold as that was, we had to wear T-shirts and were shooting in a warehouse, which was even colder -- you could see our breath. It was a fun shoot, though, but yeah, challenging.

WWE.com: On your downtime when you’re not working, what’s life like at home on the Broken Skull Ranch?
AUSTIN: I get on my Polaris [ATV] and ride around. I look for arrowheads, try to find shed horns from bucks from the previous year – there’s always something to do. I’ll get my tractor and shred a couple of areas. This is my favorite place in the world. But in August, we’re going to jump in the RV and make our way back to LA. 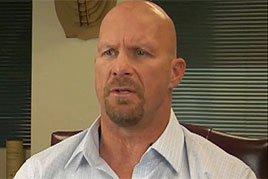 WWE.com: Speaking of which, how do you like the RV life?
AUSTIN: God, I’m telling you I’ve been RVing my entire life. I love driving, I always have ever since I was in the business. Getting out on the road on an RV is real interesting because on one hand I’m trying to take it easy and relax, and that’s why they call it a recreational vehicle, but I’m a type-A personality. So even when I don’t have anywhere to be, I’m kind of in a hurry. We're always pullin’ over to find an antique shop, and I look for old highway signs and stuff, but there’s just something about being out there on that American road. One reason we also like our vehicle is because we have three dogs. We won’t fly them commercially because if anything ever happened to them it would just break out hearts. So it’s just an experience, and I just love it, and it sure beats the sh*t out of staying in a hotel.

WWE.com: Shifting gears a bit, we noticed you’re on Twitter. How do you like it?
AUSTIN: I love it. I remember when Twitter first came out, and I was like, “What in the hell is this bullsh*t?  Who would ever do that?” But then I was like, “OK, dipsh*t, wake up and open your eyes because this is a way to communicate with your fans on a different level and let them know what you’re doing and have communication with them.” And that’s why I love it. People always ask me is that really you on there? Yeah, that’s really me.

WWE.com: Will fans ever get to see Steve Austin in a romantic comedy?
AUSTIN: Man, I’d love to do a romantic comedy. I love comedy, and I love to show a different side of me that people haven’t seen. Even doing [the WWE reality competition] Tough Enough, you get a chance to see Steve Austin actually laughs and laughs a lot. I would love to entertain the thought of doing something like that. 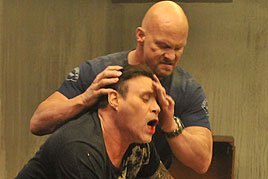 WWE.com: What do you enjoy most about acting?
AUSTIN: I’m never going to have as much diversity and depth as a Daniel Day Lewis or Johnny Depp. But I feel what I have put together, just from my experience on Tough Enough, just being myself more, is gonna make me open my eyes as far as acting goes. You hear actors always say “live in the moment” or “be in the moment.” Well, that’s what I hope to accomplish next time, be more in the moment.

WWE.com: There are a ton of great fight scenes in Tactical Force. Do you do your own stunts?
AUSTIN: [Laughs] Everybody says they do their own stunts. I’m not gonna sit here and tell you that. I do the fight scenes, but I’m not gonna be jumping from the top of a building. I leave that kind of stuff to the experts.

WWE.com: Can we look forward to any upcoming projects?
AUSTIN: I'd really like to start on another cycle of Tough Enough and get that accomplished. I've also got a couple of things we'll probably get cranked up in another month or two or three, but I want to keep those under wraps for now.