Are McGillicutty & Otunga really THAT boring? We don’t think so

Monday night on Raw, Jerry “The King” Lawler declared Michael McGillicutty & David Otunga the “most boring tag team of all time.” We think they’re The Rockers compared to these eight pairs who, despite in-ring upsides, failed to resonate with fans. 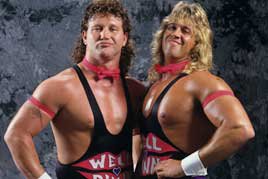 Well Dunn
Perfectly proficient grapplers Timothy Well & Steven Dunn were saddled with glam-metal haircuts, lip-printed singlets, bowties and thongs. With all those bells and whistles, they still couldn’t appeal to anyone other than middle-aged women with dirt-low standards.

Tekno Team 2000
If you were a kid in the early ’90s, you envisioned a future filled with hoverboards, flying cars and personal jetpacks. WWE had a different vision. It involved silver-clad bros in sleeveless smocks, who claimed to have traveled back in time from the year 2000. Fans didn’t buy it, and these two promising rookies were sent far, far into the cosmos.

The Beverly Brothers
As Wayne Bloom & Mike Enos, The Destruction Crew in the AWA, they were among the most respected and feared teams in the business. As Beau & Blake Beverly – two bleach-blond Hollywood transplants (billed from Shaker Heights, OH of all places) – the Tinseltown phonies delivered less thrills than an episode of Rizzoli & Isles.

Furnas & LaFon
Debuting at the 1996 Survivor Series (the same show where The Rock hit the WWE scene), these tag team specialists were among the most technically sound Superstars in the world. Unfortunately, their popularity in the Far East – where they captured nearly a dozen Japanese tag team titles – didn’t take with American audiences, who snored through many of their capable, yet uncharismatic, exhibitions. 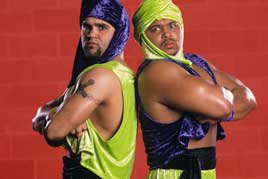 Lo Down
Managed by East Indian aristocrat Tiger Ali Singh, this team united D-Lo Brown (a former WWE European Champion) and Chaz (a former WWE Tag Team Champion), who adopted the personas of bitter Sikh Superstars, complete with turbans, sashes and flowing silk nightgowns. It made us Sikh to our stomachs!

The Basham Brothers
It’s hard to imagine these guys are two-time WWE Tag Team Champions, but it’s true. They scored wins over the Guerreros and Rey Mysterio & Booker T before being banished to ECW as Paul Heyman’s ski-masked security goons.

The Dicks
As part of their shtick, Chad & James performed a risqué dance prior to each match. All this proved was that they also couldn’t make it as Chippendales. 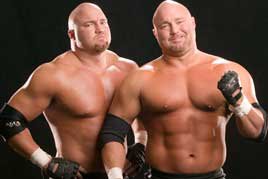 The Gymini
They were twins. Who liked to go to the gym. That’s it.