That old adage became very apparent in the hours after WWE.com posted an article that proposed the question: Does the Divas division need saving? (FULL STORY)

It's been a topic of contention for the WWE Universe ever since the powerful duo of Beth Phoenix & Natalya first announced that they were on a mission to rid WWE of all the booty poppin’ and stinkfacing that they believed was bringing the Divas down. Clearly aiming their insults at Divas Champion Kelly Kelly, Eve and The Bella Twins, The Divas of Doom inspired heated debate amongst WWE fans with some agreeing with the dominant duo while others defended the hard work and popularity of Kelly and company.

Since then, the competitors have been content to settle their differences inside the squared circle. That was until WWE.com ran a feature that, in the eyes of some WWE Divas, gave unnecessary credence to the battle cry of Beth & Natalya. Outraged over the piece, Kelly, Eve and The Bellas took to their Twitter accounts on Sunday afternoon to voice their displeasure. When WWE.com caught up with them in Columbus, Ohio hours before Raw was set to go live, the Divas were still furious.

"The truth is people who have not been in our position and are not here living the life we do have no idea what we go through as Divas," a passionate Eve told WWE.com.

It was a fiery opinion shared by her rivals, The Bella Twins. Cornering WWE.com in the hallway of the Nationwide Arena, the sinister sisters could barely control their anger. 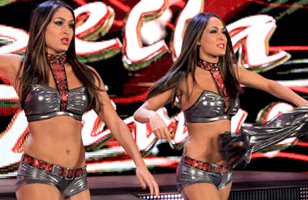 “I think what first set us off was saying that the world cringed when Brie won the [Divas Championship],” Nikki snapped. “Actually, no they didn’t — at all.”

“People can’t stand the fact that, yes, we were models, but now we can kick anyone’s butt in the ring,” Brie added. “That’s pretty much what it comes down to.”

Well aware of the fact that the feature was directly inspired by the frank opinions of The Divas of Doom, The Bellas were quick to address the blonde powerhouses as well.

“We've actually worked harder than them, because we didn’t come from a wrestling background,” Brie said.

“We weren’t raised in a wrestling family and we didn’t come out of our mom’s womb lifting weights,” Nikki added with a flip of her hair.

For Eve, the harsh criticism she's received from Beth & Natalya has been more offensive than anything.

“They lump certain Divas together as ‘model Divas.’ The truth is, I was never a model,” the former Divas Champion said. “I have an engineering degree. I can be somewhere else, but I chose to be here and I chose to fight for the Divas division every week.”

Still, the gorgeous competitor is not apologetic about her actions in the least. Although The Glamazon has had harsh words for Eve's "booty pop" and Kelly's "stinkface," Ms. Torres stands up for her energetic moves.

"I’m still a woman and I still like to have fun," she smiled. "And who doesn’t want to see Kelly Kelly’s butt in someone’s face? It's great."

Eve’s positivity was a sign that The Divas of Doom may have her shaken, but not defeated. In their own way, The Bella Twins feel the same.

“When we came into this business, everyone was against us,” Brie said. “And look where we’re at now. We succeeded. In your face.”