WWE Bring it Back!: Evolution

The classy suits, the fast-moving party atmosphere, the unbridled ruthlessness, the past, present and future of the squared circle. What was must be again. WWE.com calls for the return of Evolution.

PHOTOS OF EVOLUTION AND OTHER GREAT FACTIONS FROM WWE HISTORY 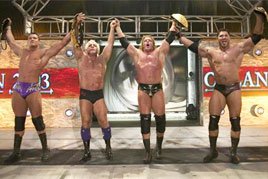 It seemed to be a moment of sheer destiny, the natural progression of all that had come before it. During a 2003 episode of Raw, the WWE Universe stood witness as “the past” – 16-time World Champion Ric Flair – joined forces with “the present” – one of the top grapplers in the game Triple H – and “the future” – then up-and-coming Superstars Randy Orton and Batista. Together, they formed Evolution and instantly grew into one of the most dominant WWE factions of all-time.

At the height of Evolution’s success, every member of this multi-generational formidable foursome held a major title. The Game stood at the top of the mountain as World Heavyweight Champion, Orton was the Intercontinental Champion and Batista & Flair were the World Tag Team Champions. However, championship gold was not the only aspect that made them a brand part. 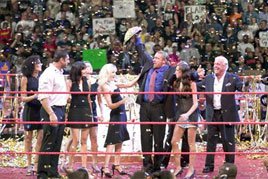 With every step they took, the members of Evolution exuded confidence, truly emulating the life of the group’s legendary mentor “The Nature Boy” by walking, talking and acting a cut above the rest. They were often seen in the company of beautiful women, dressed to the nines in expensive suits and the coolest sunglasses.

On the flip side to their sophistication – however – they also would strive to equal Triple H’s sheer ruthlessness, completely dominating their opposition in a fury of overwhelming force. 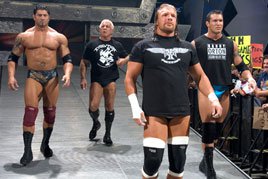 Put simply, Evolution was style incarnate and dangerous dominance all at the same time – the divine successor of a slew of infamous factions that included the immortal Four Horsemen, the NWO, The Nation of Domination, The Cooperate Ministry and D-Generation X.

The epic return of Evolution would once again represent the ever-evolving nature of WWE, elevating returning members to new heights while bringing in fresh blood to mold into greatness. 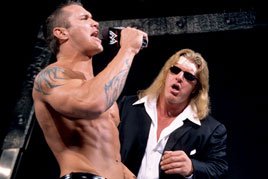 Triple H should definitely return. But, considering the legendary status that The King of Kings has grown to over the years, he could now feasibly assume the Ric Flair role – as the mentor/competitor whose knowledge is as dangerous as his in-ring ability. He is “that damn good.” Randy Orton, who has clearly soared to the lofty heights that Triple H once predicted he would, is now ready to move to the next step and take the reins as the centerpiece of the elite group.

Still, who would assume the role of the two up-and-comers of Re-Evolution? Clearly the ultra-braggadocio Dolph Ziggler has all the tools to fill the shoes of the once cocky young Orton. Despite his recent differences with both Orton and Triple H, the outspoken Cody Rhodes would also be an A-list option. 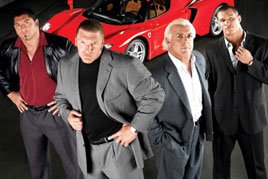 When considering a Superstar with the power and temperament once harnessed by “Evolution’s Animal,” Sheamus is a sure fire choice. Though The Great White already has the WWE Title on his resume, aligning himself with the likes of The Cerebral Assassin and The Viper would propel him to unprecedented heights. Still, another powerful possibility would be the explosive Mason Ryan, poised to make his earth-shattering mark on WWE.

Evolution is inevitable. Inside the WWE Universe, where it is always survival of the fittest, the time has come for one of the greatest factions of all-time to evolve before a new generation and to add the already electrifying atmosphere being created by the likes of WWE Champion CM Punk, John Cena and World Heavyweight Champion Mark Henry. WWE, bring back Evolution.

PHOTOS OF EVOLUTION AND OTHER GREAT FACTIONS FROM WWE HISTORY

What does the WWE Universe think?

Should WWE bring back Evolution? Let your voice be heard at WWE Interaction.