Where is The Undertaker?

On Nov. 22, 1990, the WWE Universe was introduced to a Superstar who would forever change the landscape of WWE. Making his debut at Survivor Series as the mystery partner of Ted DiBiase’s Million Dollar Team, The Undertaker immediately captivated Superstars and WWE fans alike.

No one could have predicted that 21 years later, an aura of mystery still surrounds The Deadman and the very mention of his name immediately becomes associated with his unprecedented 19-0 WrestleMania undefeated streak. However, The Phenom hasn’t been seen since his victory against Triple H at WrestleMania XXVII, and with the anniversary of his debut approaching, the WWE Universe has begun raising questions of his whereabouts. (PHOTOS)

It’s not the first time The Deadman has vanished for an extended period of time. The first instance came in 1994 after being defeated by Yokozuna in a Casket Match (WATCH). Typically, history has shown that whenever he loses a Casket Match or a Buried Alive Match, he disappears and returns with a new attitude and a renewed sense of dominance over any challengers. These consistent reinventions have only added to his mystery and, ultimately, his legend. His extended absence following a victory makes this latest hiatus even more bizarre.

Since the night after WrestleMania XXVII, the WWE Universe has been enthralled by the announcement that generations would collide when John Cena squares off with The Rock in Miami. But this contest is only one element of what will be the most historic WrestleMania ever. If The Phenom is to reemerge in time to compete on The Grandest Stage of Them All, he will be attempting to extend The Streak to 20-0. With that in mind, it is possible that The Deadman may not be seen until The Show of Shows, creating an even more memorable event. 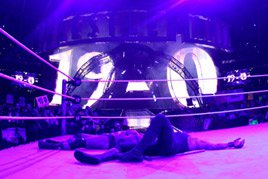 Whomever may challenge The Deadman faces a bold and near impossible feat, but it has been months since The Undertaker set foot inside the squared circle. It’s also difficult to forget the images of him being carried out of WrestleMania XXVII on a stretcher after a physical and brutal contest with The Game. Perhaps The Phenom was injured against The Cerebral Assassin and has been recovering ever since, his absence part of a plan to be at the top of his game for his potential 20th WrestleMania victory — at least, the WWE Universe hopes.

Over the years, The Phenom has proven time and time again that there is no grave that can hold him down, so we can only wonder when and how he will make his grand return.