A mainstay on the WWE video game scene for the better part of the last decade, John Cena appears alongside an elite assemblage of top Superstars and the Legends of yesteryear in THQ’s WWE All Stars, a title that allows the WWE Universe to create dream match-ups that never happened … until now.

WWE.com recently caught up with The Cenation Commander-in-Chief to talk about the exciting arcade-style action on display in the game, his own personal dream matches and the strategy he will employ in the WrestleMania XXVIII encounter the WWE Universe has been dreaming about: John Cena vs. The Rock.

WWE.com: What were some of your first impressions when you sat down to play WWE All Stars?

JOHN CENA: To me, it was like the games I grew up really liking. I don’t want to say it’s a throwback, because the game is technologically as good as any other game. But it’s got the gameplay and the over-the-top moves that I like. It’s very pick-up-and-go.

WWE:com: WWE All Stars also gives the Cenation another way to beat up on The Miz in a video game …

CENA: [Laughs] And not only do so, but in such a mythical way that he can really take a pounding.

WWE.com: You’ve been a staple in THQ’s WWE games dating back to 2003. What really makes WWE All Stars unique compared to other games you’ve appeared in?

CENA: It’s over-exaggerated. It takes everything about WWE that’s already larger than life and amplifies it. From the way the characters are presented to the atmosphere in which they’re presented to the maneuvers they can perform. And like I said, man, it’s fun to play. It’s got the guys that you see all the time, the Legends that you wish you saw, and moves that are just unimaginable.

WWE.com: Speaking of Legends, one of the great things about this game is that you can create any number of dream matches between current Superstars and WWE Legends. One such match that has recently become a reality is John Cena vs. The Rock at WrestleMania XXVIII. What will your strategy be at next year’s Show of Shows? 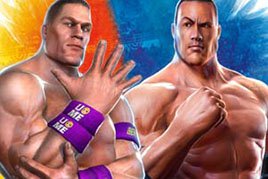 CENA: You know what? My strategy is the same with everybody. I’m known very much for my feats of strength and my ability to persevere. I think I totally would have an advantage on The Rock if we stepped into the ring tomorrow, just because he’s been gone for so long. There’s no substitute for experience, and that’s what makes a true champion a champion.

WWE.com: When you’re not playing as yourself in WWE All Stars, who’s your go-to character?

CENA: I’m a Legends guy. I’m so happy that they got “Macho Man” [Randy Savage] in the game. I really like seeing him. I’m an Ultimate Warrior guy, and Hulk Hogan, obviously. I like to use the Legends, I guess only because I’m around all of the other guys all the time.

WWE.com: On WWE.com’s recent “List This!,” the No.1 fantasy match-up was you vs. “Stone Cold” Steve Austin vs. Hulk Hogan in a Triple Threat Match. In the climax of that simulated WWE All Stars bout, you gave Hogan the Attitude Adjustment, Stone Cold gave you the Stunner and then he Stunned The Hulkster to pick up the victory. If that match were to happen in reality, how would the outcome be different?

CENA: I honestly can’t say it would be any different. If you’re asking me, I hate Triple Threat Matches. I hate any match that isn’t a traditional Tag Team Match or a traditional Singles Match, because anything can happen. It’s truly one of those deals where it’s all about being in the right place at the right time.

WWE.com: Well, WWE All Stars pits you against Hogan one-on-one in its “Fantasy Warfare” mode. How do you think you would fare in that match?

CENA: If you do that now? I have all of the respect in the world for Hulk Hogan, but I truly feel that I’m in the best shape of my career and am the strongest I have ever been. I believe I can take on any obstacle. And that’s what’s great about WWE All Stars. You get Legends vs. current Superstars, and everyone’s in their prime. 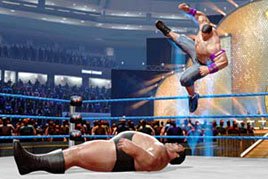 CENA: Andre the Giant. He was just one of those guys that had everyone’s utmost respect. To do that, you have to be the best. And not only the best for a short period of time; you have to be “the guy” for a long period of time. Everybody who knows Andre or even was a generation behind Andre speaks so highly of him, he’s certainly the guy I would want to be in the ring with if I had the chance.

WWE.com: In the WWE locker room, who would you say is the gamer to beat?

CENA: There’s a few of them. Kofi [Kingston] and AJ are very good. Hornswoggle plays a lot. And do not sleep on the giant known as Big Show; he puts a lot of time in. Randy Orton just discovered the glory of gaming. He’s my “rookie of the year,” if I can say that.

WWE.com: In your words, tell us why the WWE Universe – and the Cenation in particular – should be playing WWE All Stars.

If you are an experienced gamer, it still provides a challenge, because you can unlock so many new facets to the game and do so much more cool stuff. But if you just want to create some moments with WWE Legends vs. Superstars on the current roster, or just some WWE Legends, this is a great game to pick up and have fun with. And that’s the most important thing about it.