For a Diva who retired in 2006, Trish Stratus has been very busy. In the past two years, the seven-time Women's Champion has rocked the house at WrestleMania, starred in her first feature film and launched a successful line of yoga products. Up next for the beautiful brunette? A virtual return to the ring as a downloadable character in WWE ’12. Trish found a moment in her hectic schedule to talk with WWE.com about video games, cage matches and the one Diva she would love to give a little Stratusfaction.

WWE.com: Every man in the WWE Universe would like to believe you’re a gamer, but we can’t imagine that’s actually true, is it?

TRISH STRATUS: What do you mean you can’t imagine it’s actually true? Of course it is! To be honest, in the last couple years, I’ve actually had to do more adult things like tending to my businesses, so my gameplay has gone down drastically. However, WWE ’12 is just the thing to pull me back into it. I honestly can’t wait to play it!

WWE.com: Was it a big deal for you the first time you saw yourself in a video game?

TRISH: Huge. Like the craziest moment ever. I think I was more excited watching me in the game than I was watching the Raw playback when I made my debut.

WWE.com: You’re making a virtual return to the ring as a downloadable character in WWE ’12. Any dream matches you plan to make happen when you get your copy?

TRISH: I always wished I had a Steel Cage Match, so now I can finally have that. The first thing I want to do is put me and Natalya in a Canadian Cage Match.

WWE.com: Does that mean you side with Kelly Kelly & Eve in their war against Natalya & Beth Phoenix? 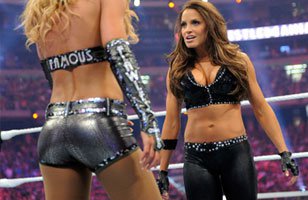 TRISH: I think my M.O. is more in line with that of Beth & Natalya. Once I entered WWE, it was a conscious decision for me to not be about modeling anymore — my career focus was all about what I did in the ring. I can, however, relate to Kelly Kelly & Eve. It’s tough, coming from one industry, to try and be taken seriously in another. That’s when it all comes down to just going out and proving yourself. All those girls are capable of doing that and leaving an impact in any world they decide to rock.

WWE.com: Your WWE ’12 character is included in a package with The Bella Twins. What do you think of Nikki and Brie?

TRISH: I’ve enjoyed watching them grow as performers. To me, the greatest thing is watching someone get to the point where they’re comfortable and confident in the ring and then they can allow their character to develop  Those two have done a great job of stepping into their role and owning it.

WWE.com: The imposing Kharma is also a downloadable character in WWE ’12. Would you have loved to step in the ring with that monster?

TRISH: Oh, completely. When she debuted, I think it was one of the first times since I retired where I would have dropped it all to go back and step into the ring with her. That would have been an epic rivalry. I would have loved to have wrestled her. Hopefully, she’ll come back so the WWE Universe can see more of her.

WWE.com: You always sound like you’re ready for a fight. Aren’t yoga fanatics supposed to be peaceful?

TRISH: Must be the Spartan in me! I love to fight, I love performing. Last year, I got approached to do an action movie called “Bounty Hunters.” When I read the script, I loved the role, but I accepted it mostly because I was able to do my own stunts. I play a bounty hunter, so they had me learn a fighting art called Krav Maga. I went into intense training for that. It was awesome to go back to fighting.

WWE.com: That sounds great. When will WWE fans be able to check it out?

TRISH: February 2012, “Bounty Hunters” will be available worldwide and I’m really excited about that

WWE.com: You own Canada’s largest yoga studio and you just launched Stratusphere Living products. Were you able to use yoga to get in shape for “Bounty Hunters?”

TRISH: That’s how the line developed actually. When I was getting ready for my movie, I had a bit of a yoga body, 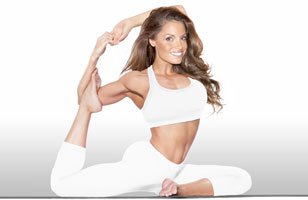 so to get my fighter body back I started developing these yoga fitness fusion workouts. I was carrying front row tickets to the gun show, so I started showing my instructors and my students. People were really reacting to it. I ended up producing a workout DVD last year and that’s what spurred the rest of the line. I have a whole line-up of products that are in retailers across Canada. They will be available on TrishStratus.com by December, just in time for the WWE Universe to have a Merry ‘Trishmas.’

WWE.com: It's the most wonderful time of the year. You retired in 2006. How does it feel to still be such an important part of WWE more than five years later?

TRISH: I’ve always said that the WWE fans are the most loyal in the whole world. They’ve stayed by my side supporting me ever since I left. It’s awesome to still feel so connected after so many years, and it’s great to be able to come back every once in a while. I know that wrestling will always be a part of my life, no matter what stage I’m at.

And learn more about Trish's yoga products at stratusphereyoga.com and trishstratus.com