AGOURA HILLS, Calif. – Stepping into the lobby of THQ’s sprawling offices, nestled amidst the rolling green landscape of Agoura Hills, WWE’s prominent place among the game publisher’s multitude of franchises is immediately apparent. A replica WWE Championship – “THQ, Inc.” proudly engraved on its nameplate – sits in a glass case beside the reception desk. On the wall just a few feet away, awards for the company’s popular SmackDown vs. Raw series account for a sizable portion of the accolades on display.

But THQ isn’t focused on the past – as of this year, SmackDown vs. Raw is no more. In its place is WWE ’12, set for release this fall and touted as the next evolution in WWE gaming. To put its own bold assertions to the test, THQ assembled a group of core SmackDown vs. Raw players to get a hands-on look at an early build of the revolutionary title before its grand unveiling at this year’s Electronic Entertainment Expo (E3), and provide critical last-minute feedback to game designers.

“We want to make sure we pay attention to our fans, because we respect them a great deal,” WWE Games Creative Director Cory Ledesma told WWE.com during THQ’s two-day community event. LeDesma has been involved with this franchise since 2000, when he worked as a lead tester on SmackDown 2: Know Your Role for Sony’s original PlayStation console. “This series is very close to my heart. Each year, we’re trying to get better and better. The overall experience [of WWE ’12] is, in my opinion, the best in the series.” 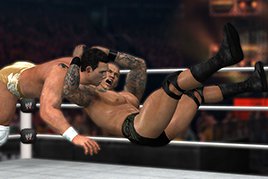 More than a mere name change, WWE ’12 is impressive, even at this early stage of development. Boasting a revamped TV broadcast-style presentation and a control scheme that will appeal to casual fans and hardcore gamers alike, the game improves on everything players liked about the SmackDown vs. Raw franchise, and tosses everything else through the proverbial barber shop window, Shawn Michaels-style.

“What happens when you build on top of something over and over, you maybe get a little cluttered and things don’t fit together nicely anymore,” Ledesma said. “Sometimes you need to take a step back, pull everything apart, look at all the individual pieces, fine-tune them and then put them back together the right way so it feels like a real cohesive experience. We’re excited to get back to that top-tier level.”

Judging by early reactions to WWE ’12, this new beginning is exactly what the franchise needed.

“A lot of fans are going to be really happy with it,” said Matt Black, moderator for the WWE Games Community website and one of 10 elite gamers invited to the event. “Gameplay-wise, WWE ’12 is a huge improvement over SmackDown vs. Raw 2011. It’s a lot easier to pick up and play.”

However, WWE ‘12’s accessibility doesn’t mean it’s lacking in depth. In addition to a revamped control scheme – which maps grapple attacks to a face button as opposed to the right analog stick grapples featured in the past few SmackDown vs. Raw titles – the game also introduces limb targeting, allowing players to focus their attacks on specific body parts. For example, if Alberto Del Rio targets his opponent’s left arm throughout a match, they become more susceptible to his devastating cross armbreaker submission maneuver. This particular tactic was employed more than once during our THQ visit, as the assemblage of hardcore WWE Games fans did little to hide their excitement over The Mexican Aristocrat’s WWE video game debut.

“Alberto is my favorite Superstar,” said GamingRing.com’s Mike Regan, who journeyed to THQ from Detroit. “His character has all of his moves and all of his signature taunts. To me, that was definitely a highlight.” 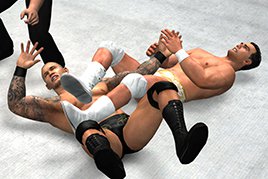 The digital Del Rio also brings along his personal ring announcer, Ricardo Rodriguez, who heralds the pompous Superstar’s arrival in WWE ’12 with the same zest as he does on WWE programming. THQ spent a lot of time perfecting the nuances of Del Rio’s iconic entrances – luxury car included – but if you’re familiar with the company’s attention to detail in its WWE titles, you already know that.

Even though his GamingRing.com compatriot made no bones about his allegiance to Del Rio in spite of the egotist’s abhorrent behavior both in and out of the ring, Brad Ward of Calgary, Alberta, Canada, did his best to represent the “Hustle, Loyalty and Respect” characteristic of Cenation. During our first day at THQ, Ward sported a bright red John Cena “Persevere” shirt, leaving little doubt as to which of the four playable Superstars in the title’s early E3 build – Del Rio, Cena, Randy Orton and The Miz – he would gravitate toward while trying out WWE ‘12’s new “Breaking Point” submission system. Coupled with the limb targeting feature, “Breaking Point” brings a new strategic approach to the gameplay.

“The ‘Breaking Point’ system is great, because sometimes I had to beat someone, but I wasn’t sure what grapple attack did what because it’s hard to memorize those,” Ward explained. “But with this system, you can just hit that body part a few more times, and then you get that tap-out.”

Ward also appreciated the game’s “Dramatic Comeback” feature, which helps losing combatants recover from a beatdown and unleash a flurry of retaliatory attacks. As a result, matches – especially those between two human players – are rarely as one-sided as they’ve been in past games.

“People are going to love that,” added OperationSports.com’s Scott Burress of Cleveland. “They have the ability to tell a story in the game, and actually have John Cena, for example, get beat up for 20 minutes and rally back. We’ve never really seen that in a WWE game before, and it’s cool.”

Given how the four available Superstars in the E3 build look and feel, hardcore gamers have much to look forward to when the full roster is revealed later this year. Then, on Nov. 22, WWE ’12 arrives on consoles, allowing WWE Universe members around the globe to trade everything from armbars to RKOs in a WWE gaming experience that’s truly bigger, badder and better than anything that’s come before it.