WWE.com spoke to Marella this morning about the incident.

"I had just left home and was going to get my hair cut before I began packing for WWE's trip to Puerto Rico," explained Marella. "[My barber] wasn't around, so I just decided to go home."

Marella was then hit by another vehicle. The driver of the other vehicle remained at the scene of the collision until police arrived, and no foul play is suspected.

"My car flipped sideways and the trunk hit a light pole, it completely crushed in," Marella said. "The airbags deployed, and all I could smell was gunpowder."

Marella's car came to rest near a light pole, and sustained significant damage. 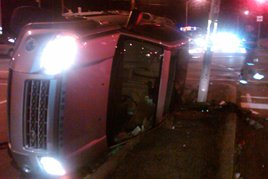 "There was broken glass everywhere, and I tried to open the passenger door, but it was stuck," Marella said.  “Luckily, there was still power in the car. I opened the sunroof and crawled out."

He will not be at Raw this Monday.

"I need to heal up as fast as possible and get back in that ring," Santino said. "I want to get back there and fight.”