Over the past several months, Intercontinental Champion Cody Rhodes has been on a diabolical crusade to veil what he perceives as “ugliness” throughout the WWE Universe, going to “great personal expense” to provide paper bag masks to just about everyone he comes across. But is this demented Superstar’s paper trail really at the “expense” of the environment?

Think about it: Much to the chagrin of his more eco-friendly Superstars and WWE as a whole, Rhodes forcefully doles out dozens of paper bags each week to unwitting fans at ringside, in addition to placing bags over the heads of each of his fallen opponents. Rhodes has even taken his sinister campaign on the road, “bagging” several fans in attendance at San Diego’s Comic-Con International 2011. ( WATCH) All of that wasteful behavior adds up.

“It’s irresponsible,” said Matt Orsaia, general manager of Finocchio Brothers, Inc./Independent Recycling, based in Stamford, Conn. “Anybody that goes around discarding recyclable material in an improper way doesn’t care about the Earth and doesn’t care about the fact that this material can be re-used and recycled. It’s a big slap in the face to the environment.”

Orsaia makes an excellent point. According to a 2008 article by the National Cooperative Grocers Association, the United States consumes 10 billion paper grocery bags each year, which require 14 million trees to produce. The masked menace’s insistence on distributing offensive paper goods as a means to cover up WWE Universe members’ supposed imperfections is doing little to remedy that alarming statistic. 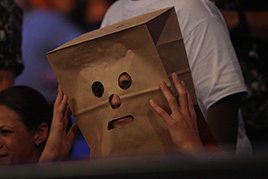 Speaking candidly to WWE.com, one of Rhodes’ baggers – who donned one of the sinister sacks to conceal his identity – had a shocking revelation about the twisted and bitter Superstar that further reiterated Rhodes’ disdain for the planet.

“To be honest, I don’t even think he celebrates Earth Day,” the mystery bagging assistant said.

What are some ways Cody Rhodes could “go green” in his devious bagging mission? Share your suggestions with the rest of the WWE Universe on Facebook and Twitter.