A college wrestling coach from South Dakota shares his story about how WWE has influenced  his team’s honorary coach, who is a big fan of John Cena: 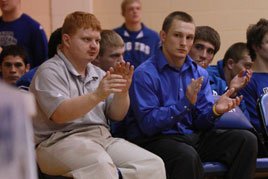 My name is Boomer Fechko and I am the assistant wrestling coach at Dakota Wesleyan University in Mitchell, S.D. We currently have a young man who lives in the community that is mentally challenged. His name is Ian Ames. About a year or so ago, our head cross country/track coach has taken Ian as an honorary coach to the competitions.  Cross country season is in the fall while track season is in the spring, which leaves Ian open during the winter months. Our head coach and I decided to bring Ian on as an honorary coach for wrestling and Ian sits on the bench (in a DWU Wrestling coach’s shirt) with us during our home matches. He has an absolute blast. Our wrestlers accept him in and do a great job with him. Ian likes to be part of the team so he asks if he can help out during the match, which we usually put him in charge of handing the guys a water bottle as they come off the mat, and he usually gives 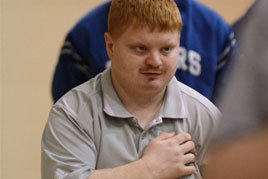 them a fist bump as well. The opposing team has caught on to what we are doing with him and they even shake Ian's hand when they come over to shake the opposing coaches’ hands.

Ian is a huge John Cena fan. He watches Monday Night Raw every single Monday and always talks about it the next time we see him. Our wrestlers have their own walk out music when they step on the mat to compete and one of our wrestlers plays John Cena's entrance music just for Ian. Ian goes nuts when the song is played. The experience our wrestlers, and us as coaches, get from Ian being a part of this program is awesome and it seems that Ian has a blast with it all as well.

My name is Josh Schechter. I’m a Special Education Teacher at Longview School in Germantown, Md. Longview School is a special center in the Montgomery County Public School system. The school serves students in grades K-12 who have been diagnosed with Severe and Profound Disabilities. I teach a class of middle school aged students. Every morning I do a musical warm up with my students. I begin the warm up every day by reciting “Ohhhh You Didn’t Know? You Better Call Somebody,” from the intro of WWE Alumni Road Dogg. My students love it, and it always gets them in a great mood to start their day.

I would also like to extend an open invitation to Road Dogg to come and read a story to my students at his convenience the next time he might be traveling through the Washington D.C. metropolitan area. I think my students would really enjoy meeting him.

Are you an educator with a story you want to share with WWE.com's Teachers' Corner? E-mail us.