Who is Torrie Wilson?

Tabloids are buzzing amid speculation that former WWE Diva Torrie Wilson is now the squeeze of New York Yankees third baseman Alex Rodriguez. The $275 million man was spotted in Wilson’s hometown of Boise, Idaho over the holiday weekend and the pair has been seen biking around Miami, the site of WrestleMania XXVIII on April 1, 2012, according to USA Today. The paper also reported that the two vacationed in Mexico recently with George Clooney and another former WWE Diva, Stacy Kiebler. While A-Rod (not to be confused with Alex “A-Ry” Riley) no doubt knows of Torrie’s exploits in the squared circle, the sports world at large may not be familiar with the blonde bombshell’s in-ring career. (PHOTOS OF TORRIE WILSON)

After a successful career in fitness modeling that included a Miss Galaxy championship, Wilson entered the squared circle with World Championship Wrestling. At first, she managed David Flair, the son of 16-time World Champion and WWE Hall of Famer Ric Flair. Wilson guided the younger Flair to the prestigious United States Championship in July 1999. 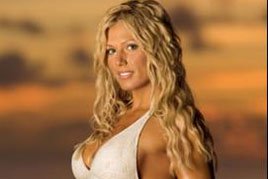 During her time in WCW, Wilson managed such Superstars as the late WWE Hall of Famer Eddie Guerrero. She used her stunning looks to distract their opponents and guide them to victory.

When WWE purchased WCW, Wilson came along for the ride.  There, she began to focus more on her in-ring career, doing battle with top Divas including Lita and Trish Stratus and often joining forces with fellow WCW alumni Stacy Keibler. Still, other Superstars were entranced by her beauty. The blonde bombshell joined forces with several up-and-coming Superstars.

Torrie wrapped up her in-ring career in early 2008 after suffering a back injury. However, the beauty stepped out of retirement in 2009 to take part in a 25-Diva Battle Royal at WrestleMania XXV.

Wilson still has a competitive edge. She was willingly stranded in the jungle as part of the reality show “I’m a Celebrity… Get Me Out of Here!” Week after week, the former Diva outlasted nearly all other contestants, finishing as runner-up behind film and TV star Lou Diamond Phillips.

A-Rod’s list of exes reads like a who’s-who of Hollywood and includes actresses Cameron Diaz and Kate Hudson. They better think twice before trying to get back in the good graces of the three-time MVP and 14-time All-Star, or else they may catch a dropkick from one of WWE’s most dangerous Divas.