Trish Stratus' movie debut, Bounty Hunters, will be released on DVD February 28 (watch the trailer HERE). On the eve of the film's release, the former Women's Champion and WWE Tough Enough trainer took a few minutes for a Q&A with WWE.com.

WWE.com: How did you land the role in Bounty Hunters?
TRISH STRATUS: I always say everything happens for a reason. Believe it or not, it was somebody who knew Carl DeMarco, former head of WWE Canada. And he knew somebody who knew somebody who knew that this role was being written with me in mind. I guess the director [Patrick McBrearty] was looking for a strong female lead and envisioned me for the role. I thought it would be interesting for me to read because I was kind of the inspiration for the role. I got the script and basically, Trish Stratus kind of jumped off the pages. The character [Jules Taylor] really resonated with me and I accepted the role.

WWE.com: So the director is a WWE fan?
STRATUS: Yeah, and that was neat. I could tell when we got into it that he understood the importance of character development. Even when we got into the fights, every single character in the movie has their own specific fight style. He was really kind of protective over what each character did, and when the fight coordinator worked on the scenes he was very protective. It kind of reminded me of WWE. I think it definitely translated when you see the fight scenes that there was this defined role for each character and it came out pretty cool. 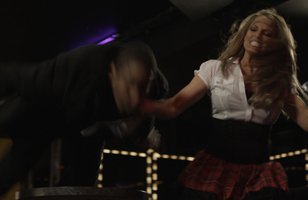 WWE.com: Do your own stunts?
STRATUS: I did, of course. I wouldn’t have it any other way!

WWE.com: Really?
STRATUS: Yes, sir! You’ll see there was one crazy moment where I might happen to fall out of the back of an ambulance. And yes, that is really me, and there is no bluescreen behind me.

WWE.com: Did you sustain any injuries shooting all the action?
STRATUS: Of course, the typical injury that comes working on any sort of fight. If you watch closely, you’ll notice Jules Taylor has bruises all along her arms, and those are real. That was something we did. One of our very first scenes was in an ambulance and it’s kind of like, "the famous ambulance scene" because you’re in close quarters and action ensues within the back of an ambulance. But of course, you’re working with real objects and limited space. The bruising was right in the beginning of the shoot, and they stayed with me for the length of filming. But nothing more or less than I was used to dealing with in WWE.

WWE.com: How long did you work on the movie?
STRATUS: I think we were at it for a month and a half. Not too much of a time commitment as far as the actual filming. What took longer was probably the preparation; I learned a new fighting art called Krav Maga, and it’s actually something that Michelle McCool is very well known for. It’s an Israeli Special Ops fighting [technique]. So I met with the trainer and trained for a couple months going into this role just to prepare and get me back into "fight" mode. There was also getting to know my nemesis in the film and it was important for us to have this chemistry that definitely translates into the movie. We have a number of fight scenes in the film, so we worked and trained together, and it was just a relationship we felt was very important to build. It was quite an interesting process, because we did night scenes, so we were all vampires for a while there.

WWE.com: Which was tougher? Bounty Hunters or training for WWE? 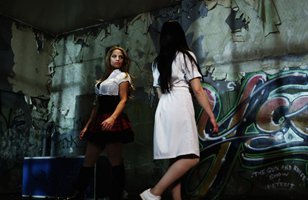 STRATUS: Equally as grueling on the body. Here’s the thing: I was a little bit Trish the Yogi at this point when the script came to me. I had been doing just yoga, so when I got the role and read it, I went, "Hmm, I have to get back into fight mode."

I actually went and changed my training entirely, that’s how I created my own unique yoga, Stratusphere Yoga. I kind of took the yoga I was doing and realized I had go back to my old school training; incorporate some strength training and old school squats. I kind of hit it like Rocky Balboa because I realized my yoga body couldn’t withstand the training – nor could it take the beating – that I would be ensuing shortly.

When I went back to the dojo, my body at first was kind of like, "Whoa, whoa. I thought you were retired." But I like to say we wrestlers have a calloused body; it sounds kind of gross, but your body starts to go, "Oh yeah, I remember this."

In WWE there’s no way around it - we’re wrestlers and we make contact. When I try to approach my fight scenes as a stunt person would, which was making no contact, it was very difficult for me, so the director looked at us and said, much like you’re approaching the script, go ahead and go with what you’re comfortable doing in these fight scenes. Rather than approach the scenes as stuntwomen, we approached them as fighters, and that’s why they’re such breathtaking scenes, I would like to say … we’re fighters. We know what it feels like to get punched in the face and deliver a punch and kick, so it was kind of cool. I was really excited about the opportunity to showcase the wrestling world to the movie world and mesh the two. 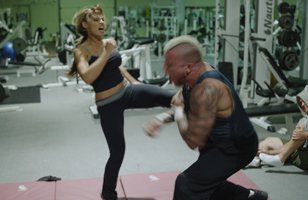 WWE.com: How is acting different than performing in WWE?
STRATUS: I would say the main thing that is missing is the instant gratification. Of course you’re used to getting a response from every little move you do, which is the point of being a sports entertainer - you go out there to elicit a response. But with [Bounty Hunters] you go out there on this closed set and it’s a little different because you do this cool movie and there’s really no reaction.

I’ll tell you what is equally gratifying, seeing the fight scenes and watching the movie on the big screen [at ActionFest 2011]. Watching it on the big screen was totally rewarding and to see myself fight with sound effects? Very cool.

WWE.com: Why would the WWE Universe enjoy seeing Bounty Hunters?
STRATUS: I think fans are going to dig it. They’re going to recognize [my character] Jules Taylor; she’s not a big stretch from me. She’s Trish Stratus - a butt-kickin’ chick. So the character wasn’t a big jump.

What makes this movie are two things: the fight scenes are amazing, and this movie was supposed to be a straight-up action flick. My costar Boomer Phillips is amazingly funny and the director was pretty cool. He gave us creative freedom to approach the script in our own way and sort of go with what we felt comfortable with. So we improvised and a lot of scenes we just riffed on, and it was kept in the film.

WWE.com: Describe your Bounty Hunters experience in one word.
STRATUS: Action. I think people will be very Stratusfied by the action in Bounty Hunters.