Is Mick Foley going to WrestleMania?

On Monday's Raw SuperShow, Interim Raw General Manager and Executive Vice President of Talent Relations John Laurinaitis made the shocking announcement that Mick Foley is officially an entrant in the 2012 Royal Rumble Match. (PHOTOS) It was an unexpected change of heart from the Interim GM, who just a week before not only denied The Hardcore Legend’s request to be in the match but also bashed him in the head with a microphone.

Now, with less than a week’s notice, Foley will vie for a guaranteed World Title opportunity at WrestleMania. This Sunday will mark the seventh Royal Rumble Match outing for the three-time WWE Champion. Three of those appearances came in 1998, when Foley famously competed as Cactus Jack, Mankind and Dude Love – much to the befuddlement of his opponents. (PHOTOS) Additionally, at the 2000 Royal Rumble event held at New York City's legendary Madison Square Garden, he had a classic Street Fight with Triple H for the WWE Championship. WWE.com caught up with The Hardcore Legend shortly after he received the good news.

MICK FOLEY: I wish I’d known a week earlier! I would have started training 13 days in advance of the Rumble instead of six. I could have used that extra week to prepare.

WWE.com: Last week John Laurinaitis hit you with a microphone. (PHOTOS) This week he put you in the Royal Rumble Match. What do you think of him? 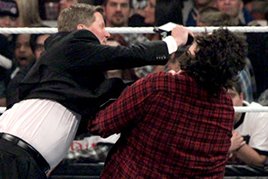 FOLEY: My opinion on John might surprise a lot of people. I’m one of the few people who actually wrestled John. And he was actually very good. He’s a very inept Interim General Manager, but I have to respect a guy who wrestled as often as he did and in a very physical style in Japan.

Having studied psychology in high school, I know about Freud’s theory of transference. He was really angry at Punk and took it out on me, like when somebody has a bad day at the job and yells at the dog. I understand human nature and he gets one free pass. After that, it’s time for the Interim GM to pay the tab.

WWE.com: How are you going to prepare for the Royal Rumble Match?

FOLEY: I am going to hope for the best. Honestly, I’ll be in quite a predicament. Imagine if I win this thing! What Dolph Ziggler said [about me going on to WrestleMania] could come to fruition. I don’t want people to be let down if I’m in the main event at WrestleMania. There are a lot of newer members of the WWE Universe who are not that familiar with me and are wondering why I’m in there. But it’s a good bridge to cross if and when we get  there.

I’m just going to hope for the best. I’m also hoping for a late number. If I go in early I’m going to try and eliminate a couple of people, just to have a nice piece of video tape that I can rewind over and over with my kids. This is partially for me, but it's really, truly something I want to do for my kids so they can see their dad in the WWE ring.

WWE.com: If you win the Royal Rumble Match, which title are you going for?

FOLEY: That’s outlandish thinking right now. I’ll cross that bridge when we get to it. It’ll probably be up to my kids who they want to see beat me worse. It takes a good man to beat me, but it doesn’t take him very long.

WWE.com: In the 1998 Royal Rumble Match you appeared as Cactus Jack, Dude Love and Mankind. Can we expect anything like that Sunday? 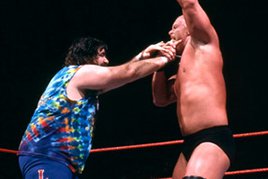 FOLEY: That might be pushing my luck. I think people will be accepting of one Mick Foley entry. Three or four might be overdoing it. My eight-year-old Hughie, a huge member of the WWE Universe, once asked, “Have you ever been in the Royal Rumble Match?” I said, “Have I ever been in it? In 1998, I entered as three different personas!” And he looked at me and said, “And you still couldn’t win?” So, I’ll just enter as one guy and hope for the best.

WWE.com: Was 1998 your favorite Royal Rumble moment so far?

FOLEY: My favorite Royal Rumble memory was in 2000. I had that killer match with Triple H [as Cactus Jack]. I thought at the time it might be my last match, and I was showing people the Mick Foley I wanted them to see after having a lot of fun as Mankind. That’s probably my best Royal Rumble memory ... up to 2012, that is.