It’s March, and that can only mean one thing around the WWE Universe — The Show of Shows is upon us and there’s a hint of madness in the air. While March may traditionally signify a change in the seasons, it’s also ushered in some of the greatest moments in WWE history; fitting for that time of year when all members of the WWE Universe have both feet set squarely upon The Road to WrestleMania. 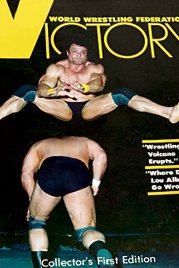 March, 1983
A newsstand ‘victory’
While its name may have only lasted three issues, when Victory Magazine hit newsstands in March, 1983, a beloved hallmark of fandom was officially launched. Giving its readers an in-depth look at the latest WWE action and their favorite Superstars, Victory — and, later, WWE Magazine — was an indispensible resource for discerning members of the WWE Universe. Billed directly on the cover as a “Collector’s First Edition,” issue one of Victory set the tone for what WWE Magazine would eventually become — a staple in the month to month buying habits of any astute WWE Universe member. Today, WWE Magazine is still going strong nearly three decades after its inception. (PHOTOS) 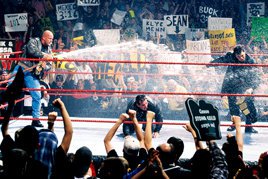 March 22, 1999
An iconic moment for an iconic Superstar
“Stone Cold” Steve Austin has given the WWE Universe a plethora of unforgettable moments, many of which can be boiled down to a brief descriptor. Case in point, this classic March moment is known simply as “the beer bath.” In one of the most memorable events in Raw history, “Stone Cold” arrived in style, raised a little hell and left an unforgettable mark on the memories of everyone watching. Barging into the arena driving a beer truck, Austin proceeded to douse the McMahons and The Rock with gallons upon gallons of ice cold brew. In the lead up to their bout at WrestleMania XV, Austin raised The Great One’s ire before taking his title at The Show of Shows. (PHOTOS) 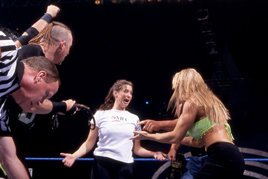 March 30, 2000
Ladies, last
Main Event matches are a natural fit for championship bouts — the most important match of the night goes on last, giving onlookers a lasting impression to take home with them. So when Stephanie McMahon was scheduled to challenge Jacqueline for the WWE Women’s Championship, the match’s appeal garnered Main Event status. An inexperienced in-ring performer, Stephanie was noticeably nervous heading into the bout, but any apprehensions faded away when members of D-Gegeneration X entered the arena to flank her at ringside, all but ensuring the “Billion Dollar Princess” an unfair advantage. This assumption came to fruition as Tori interfered in the match and delivered a DDT to Jacqueline, making way for an easy pinfall win for Stephanie. Despite its inauspicious finish, though, the match lives on in history as the first Divas match to be the main event of any WWE television show. (PHOTOS) 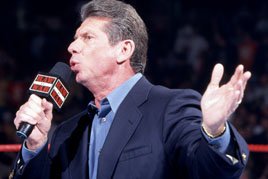 March 26, 2001
The WWE Universe expands
Regular viewers of WCW’s Monday Nitro were in for the surprise of a lifetime when they turned on their television sets the night of March 26, 2001. In one of the most shocking moments in WWE history, those tuning in for WCW action were greeted by none other than the WWE Chairman himself, Vince McMahon, who appeared in a first-time-ever simulcast on both programs — Nitro and Raw. Broadcasting live from Cleveland, Ohio, Mr. McMahon announced to the WWE Universe and the WCW faithful that he had acquired his competition and had delivered the final blow in the “Monday Night War.”
(WATCH | PHOTOS)

March 31, 1985
Revolutionizing an industry and changing the world
It may have been the last day of the month, but March 31, 1985, was anything but an afterthought. That day, Madison Square Garden was the setting for what would eventually become the grandest spectacle in all of pop culture. More than 19,000 members of the WWE Universe packed into the legendary New York landmark and an additional one million watched on closed-circuit television and pay-per-view at home as “WrestleMania” became a household name. With a high-powered main event that featured Hulk Hogan and Mr. T squaring off against “Rowdy” Roddy Piper and Paul Orndorff, WrestleMania ushered in a new era as Mr. McMahon’s creation came stunningly to life. Though no one could have guessed what The Show of Shows would eventually become, it was abundantly clear that day in March that something special was happening. (PHOTOS)