Seasons may change and the memories of past challengers may fade, but, through it all, Cody Rhodes has remained the Intercontinental Champion.

As he flips the calendar to Feb. 28, 2012, Rhodes has officially held his illustrious title for 200 consecutive days, a milestone that allows the second-generation Superstar to join an exclusive fraternity of legendary Intercontinental Title holders including The Rock, Mr. Perfect, Pedro Morales and the icon Rhodes will surpass on the list of longest reigns when the calendar turns to March: Shawn Michaels.

The long and winding path that has led Rhodes to this significant landmark certainly came with its share of formidable obstacles. Here’s a look at the brash young Superstar's most meaningful moments along the way: 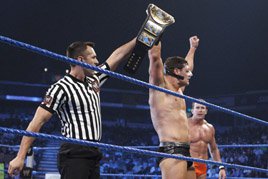 August 12, 2011 – Cody Rhodes defeated Ezekiel Jackson on SmackDown
When WWE COO Triple H granted him a title opportunity on the eve of SummerSlam against Intercontinental Champion Ezekiel Jackson, the masked Rhodes seized the moment by executing the Cross Rhodes to capture his first title triumph in singles competition. (PHOTOS | WATCH) 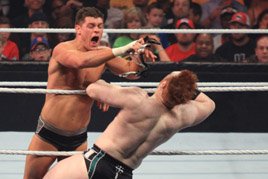 September 26, 2011 – Rhodes defended the Intercontinental Championship in an epic Battle Royal on Raw SuperShow
After second-guessing Triple H’s credentials as WWE COO, Rhodes was forced to defend his title on the spot in a 10-man Battle Royal. Overcoming nine other Superstars including Daniel Bryan and Ezekiel Jackson, the crafty competitor used his own mask to push Sheamus over the top rope and retain his title. (PHOTOS | WATCH) 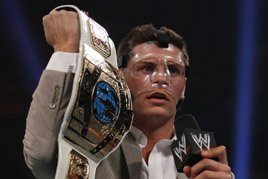 October 2, 2011 – Rhodes reintroduced the classic Intercontinental Championship belt at WWE Hell in a Cell
In an effort to put himself in the lofty company of the great Intercontinental Champions that preceded him, Rhodes reinstituted the classic title belt that was worn by the likes of WWE Hall of Famers Ricky “The Dragon” Steamboat and Bret "Hit Man" Hart. He then defended the coveted title in an impromptu match against John Morrison. (PHOTOS | WATCH) 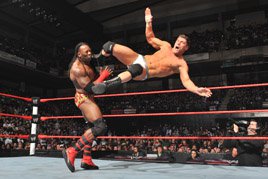 December 18, 2011 – Rhodes reigned supreme over Booker T at WWE TLC
Tired of what he characterized as Booker T’s disparaging comments against him, Rhodes softened up the five-time WCW Champion with a brutal pre-match assault. Booker still makes it to ringside for his title opportunity, but Rhodes laid him out with two springboard kicks to successfully defend the Intercontinental Championship.  (PHOTOS) 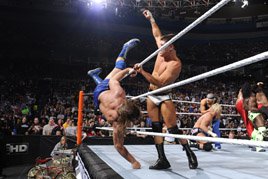 January 29, 2012 – Rhodes lasted 41:57 in the 2012 Royal Rumble Match, eliminating six Superstars in the process
Though his title wasn't at stake, Rhodes showed off his championship pedigree by eliminating more Superstars than any other competitor during the Royal Rumble main event. He lasted almost 42 minutes before his night came to an end courtesy of a Big Show clothesline. (PHOTOS | WATCH)