Twice the beauty, twice the fun beckons for twice the championship run. WWE.com calls for the return of the WWE Women’s Tag Team Titles.

In more than any other type of match WWE has to offer, the Divas have showcased their tremendous abilities in tag team action – an arena in which they have excelled time and time again. It stands to reason that since they are taking such an active role in this particular level of competition, there should be championship gold in place for which to compete.

Moreover, today’s Diva duos have a greater opportunity to take that title to unprecedented new heights. It’s true that WWE Hall of Famers like The Fabulous Moolah, Wendi Richer and Sensational Sherri helped defined the ’80s – the era when the Women's Tag Team Title was last active – and set the stage for the current crop of in-ring femme fatales. 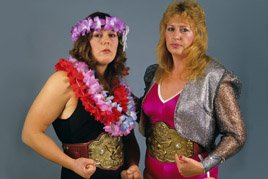 Yet despite the incredible ability and influence of these past elites among the singles ranks, they never had a strong enough group of female competitors at their side that would allow the Women’s Tag Team Titles to build a true legacy.

This roadblock to greatness certainly does not exist today – an era in which numerous Diva pairings have proven to be just as effective as their male counterparts where tandem excellence is concerned.

Without question, Beth Phoenix & Natalya have exhibited a spirit of dominance similar to that of Demolition, The Bella Twins the tag team savvy of the Hart Foundation and Kelly Kelly & Eve the explosive charisma of current WWE Tag Team Champions "Air Boom."

By throwing such a grand prize like the Women's Tag Team Titles back into play, WWE would add a crucial dimension to today’s Divas picture, raising the stakes on their matches overall while adding to their stunning nature that has captivated the WWE Universe over the years.

WWE, the time has come to bring back the Women’s Tag Team Championship.